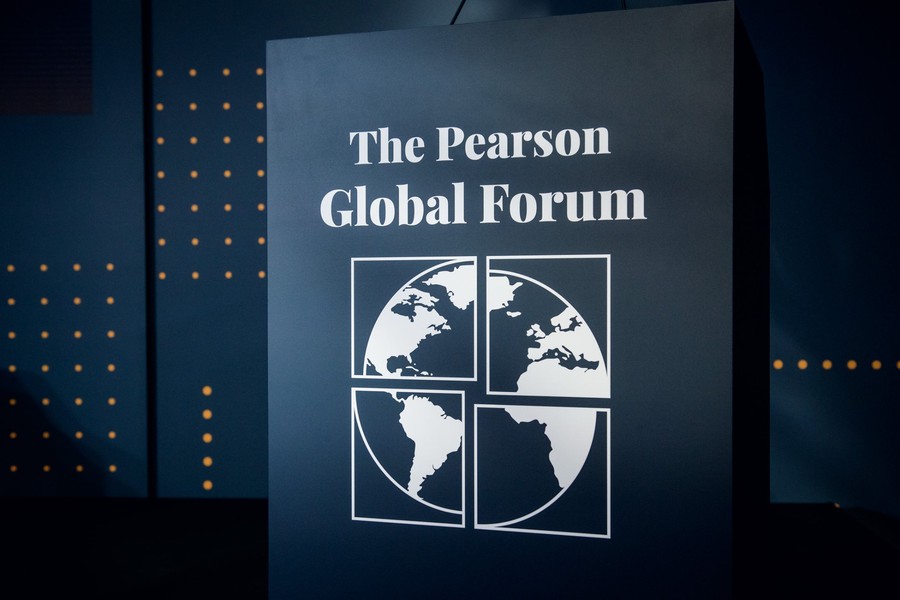 A photo from the 2019 Pearson Global Forum, by Stefan Hoederath.

Courtesy of The Pearson Institute

A group of notable professors, scholars and policymakers gathered virtually to discuss global conflict prevention at the third annual Pearson Global Forum. Spanning three days from October 6–8, the events showcased new research and provided commentary on global conflicts and issues. A different issue was covered each day, with the first day being dedicated to climate change, the next to warfare and pandemics, and the last to discussing weapons of mass destruction.

The Pearson Global Forum, hosted by the Pearson Institute, is an annual event that seeks to address global conflicts and issues using data and scientific research.

Tuesday’s session focused on climate change. Alice Hill, a researcher at the Council on Foreign Relations, painted a bleak picture for humanity’s future if climate change remains unchecked. “The core system supporting global stability rests on that fundamental assumption that the climate is stable,” said Hill. “Climate change has the potential to alter virtually everything as we know it.”

Hill suggested, however, that the effects of climate change can be slowed if a concerted effort is made to counteract it. “Undertaking this task will require an overhaul in our approach to development and diplomacy,” she said. World and organization leaders must be trained on climate change, according to Hill, and early warning systems must be improved. Emissions must also be cut drastically.

Water scarcity was another key topic. 785 million people do not have access to drinking water and 3 billion do not have basic hand washing capabilities. In addition, according to Seth B. Darling, Director of the Center for Molecular Engineering at the University of Chicago, “Over the next 30 years, the world’s demand for water will rise 50 percent.” We are nearly “destined for conflict driven by water scarcity.”

Like Hill, Darling concluded his brief talk on an optimistic note. “No matter how dirty we make it, water can always be cleaned,” he said. The world can “mitigate conflict by investing to develop more efficient and effective ways to recycle water.”

According to Palmer, during both the bubonic plague and COVID-19, individuals tend to believe that a pandemic will show up, wreak havoc, and then quickly end. What societies fail to account for, however, is the way that viruses tend to stay around long after the initial outbreak. This often leads to a wave of mental health problems about five to six months later as people realize that life will not return to normal, though according to Palmer, the advanced medicine of today allows us to be in a position where “we’re not worried that we’re still going to be having shutdowns like this every couple of years.”

Koyama and Palmer both criticized the way that humans tend to narrativize major catastrophes by looking for a scapegoat, and compared the current response to COVID-19 to Europeans in the 14th century blaming Jews for the plague. “The Black Death was accompanied by terrible pogroms in many parts of Europe against Jews, because one of the initial myths of the Black Death was that Jews were poisoning the wells,” said Koyama. “We’ll see if there are similar stories of xenophobia during COVID.”

“People find it much more comforting when there is a specific actor who is responsible for doing something. So we’re seeing a variety of stories about COVID that attribute it to some intentional thing that somebody did,” added Palmer. “It’s more satisfying to think it’s intentional rather than chaos.”

In addition, Palmer pointed to the influence of apocalyptic fiction and the way it can lead people to make dangerous decisions, because they view themselves as the protagonists of their own stories. “You, the [point of view] character, get to break the rules and it’s okay. If you break the quarantine but everyone else follows it, it’ll be fine, and that’s how everyone is behaving.”

The panel pointed to some precautionary measures countries can take to reduce the impact of another pandemic. Palmer suggested training more doctors and nurses, claiming that the countries handling COVID-19 with the most ease are those hit by Ebola a few years back.

Later that day, Zalmay Khalilzad, Special Representative for Afghanistan Reconciliation in the U.S. Department of State, and Andrew Wilder, Vice President of Asia Programs for the U.S. Institute of Peace held a Fireside Chat.

Despite ever-present violence in Afghanistan, Khalilzad is optimistic about the future of the country. “I am hopeful. I expect that we will make progress,” he said. With the Taliban finally sitting down at a negotiations table, “Afghans have a historic opportunity to agree on a formula that works for them.”

Thursday’s discussions focused on weapons of mass destruction. Thomas Countryman, Chairman of the Arms Control Association, illustrated how pressing the issue of nuclear weapons is today.

Francesca Giovannini, Strategy and Policy Planning Officer at the Comprehensive Nuclear-Test-Ban Treaty Organization, believes that the scenario Countryman described is avoidable. “There are a series of factors that make me quite optimistic about the fact that nuclear weapon states can in fact work together towards reducing nuclear risks.”

“If this restrained behavior [of nuclear states not engaging in nuclear conflicts] becomes the norm,” said Giovannini, “then we can work on nuclear risk reduction strategies.” She added, “I think that challenges like climate change and pandemics have really demonstrated the need to prioritize other urgent matters.”

Robert Rosner, professor in the Department of Astronomy and Astrophysics, brought up the question of how scientists can play a part in creating a safer future.

“Ultimately, if our goal is to eliminate atomic weapons altogether, [it] will require trust, and trust comes along with the ability to verify, to detect cheating for example. And so this is I think a key role that scientists can play a part in, which is to develop the technologies that allow us to prevent going back to the arms race that was the result of our work during World War II,” said Rosner.

Pearson Institute Director James A. Robinson concluded the three-day event by thanking all those who put their time into it and expressed his hope that next year’s forum will be held in person, though that remains to be seen