The wide-ranging talk centered on the upcoming election and recent political upheavals. 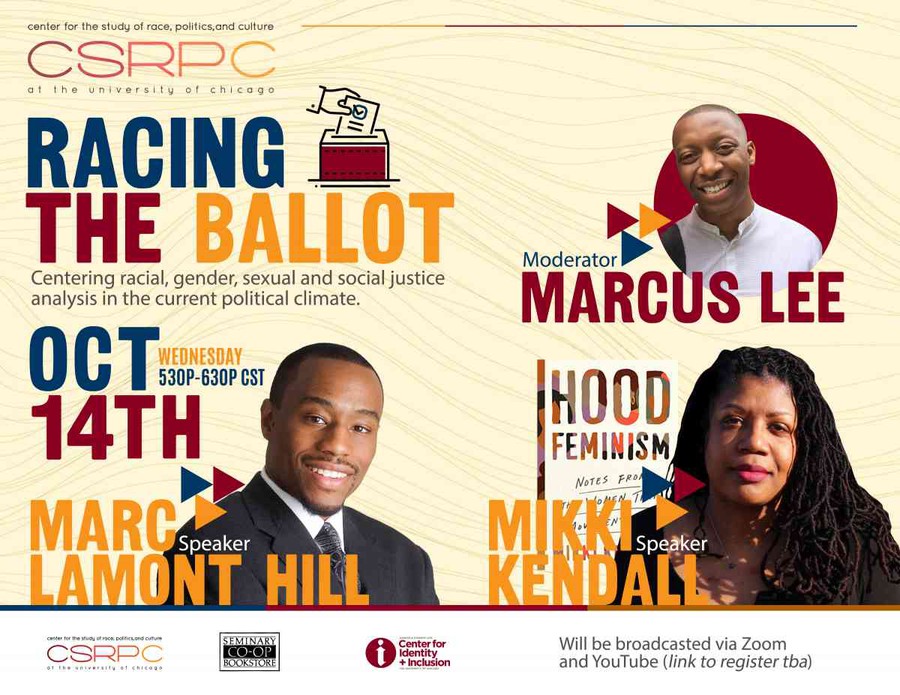 Courtesy of UChicago Center for the Study of Race, Politics, and Culture

Well-known academic and author Marc Lamont Hill sat down virtually with acclaimed author Mikki Kendall to discuss the current political climate and why voting, though important, is only one of many ways to get involved at “Racing the Ballot.”

The event was sponsored by the Center for the Study of Race, Politics, and Culture in conjunction with the Office of Multicultural Student Affairs and the Seminary Co-Op and was moderated by writer and Ph.D. candidate at the University of Chicago Marcus Lee.

When asked at the beginning of the discussion how she would define the current blend of the pandemic, social upheaval, and an impending election, Kendall characterized it in dire terms.

Both Kendall and Hill went on to point out that the current political and social situation is not actually unprecedented, as many have claimed, but the product of years of racism and injustice that people do not want to admit or remember happened.

“This doesn’t feel unprecedented to me,” Hill said. “It feels like the logical extension of an empire in decline.”

Hill argued that Trump is also a product of those centuries of unacknowledged racism and injustice.

Building off the idea of American denial of responsibility, Kendall, who is currently working on a more history-oriented project, pointed to historical instances of this country’s hypocrisy.

“When we’re talking about Germany and the Holocaust, when we’re talking about oppression in other places, we always sort of have this weird pretense that it couldn’t happen here. But it did happen here. Many of the camps and the solutions and all of those awful things that we think of as America having fought against during World War II, America was fully on board with,” Kendall said. “Some of the greatest crimes against humanity have happened under the auspices of that flag.”

In trying to find the cause of the prolonged injustice suffered in this country, Hill pointed to what he calls “the privatization of the public good.”

“What is the economic arrangement that the United States is built upon? What are the arrangements of power that allow us to get to a moment like this?” he asked. “The privatization of the public good has been something that we’ve seen over decades. We’ve invested less and less in the public good, and we’ve privatized it.”

Though both Kendall and Hill argued that many historical systems and problems have led to the current state of unrest and reckoning, they still believe that change can occur. It does involve voting, but Hill specified that there is much more to the issue than simply checking off a ballot.

“I see voting as a tactic,” Hill said. “It’s not an overarching strategy. It’s not a freedom project in and of itself. You know, I don’t believe our ancestors died for us to vote. They died for us to be free. But voting is an extension of that. It’s an exercise of that.”

Hill mentioned that under the present circumstances, however, the stakes of the election are much higher than normal.

“I think to allow Donald Trump to be president for another four years is to concede the death of hundreds of thousands of other people,” he said.