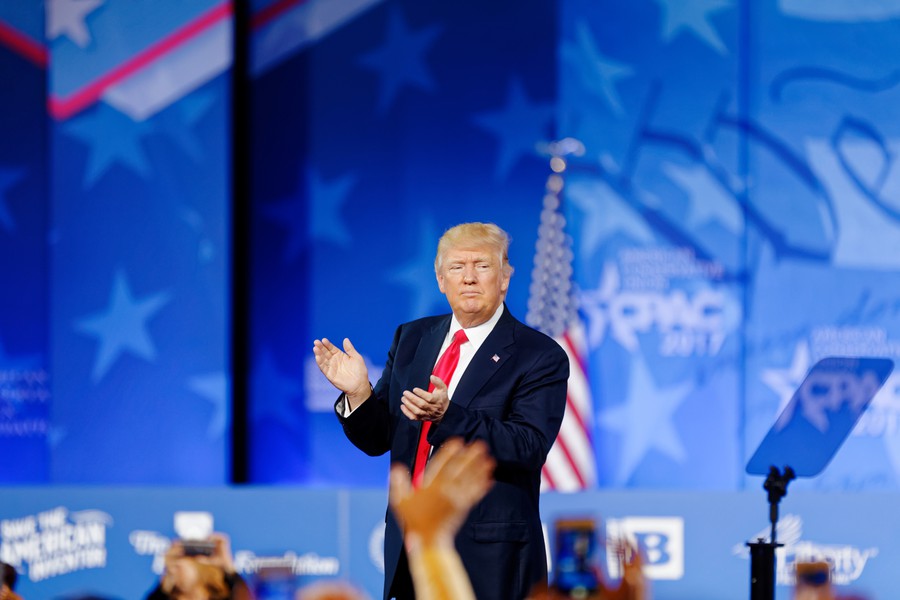 President Trump on stage at CPAC in 2017.

Donald Trump’s first term as president draws to a close. While the policy initiatives of the Trump administration have been the subject of much national discussion, they have also shaped the lives of college students on campuses across the country. Some of the most pressing issues faced by students include immigration, sexual assault, and protests against inequity and racial injustice.

As a central policy plank of the Trump administration, changes in immigration policy have been both highly visible and highly controversial. In 2017, Trump announced the ending of Deferred Arrival for Childhood Arrivals (DACA), an executive order passed into law by President Barack Obama that would protect the citizenship of undocumented immigrants brought to America as children.

This was challenged in court and eventually appealed to the Supreme Court. In June of 2020 the court ruled 5–4 that termination of DACA was judicially reviewable and had violated administrative procedure. Anyone who had previously held DACA status remained eligible for renewal.

The next month, in July, ICE announced a new rule that international students enrolled in only online classes would not be eligible to stay in the country. The policy was later rescinded after Harvard University and Massachusetts Institute of Technology (MIT) filed lawsuits. UChicago submitted an amicus curiae brief for the Harvard lawsuit, as well as a statement of support for a lawsuit filed by the Illinois attorney general but did not join the suits outright. Returning international students have since been able to maintain their F-1 status even if studying remotely.

The University released a statement on July 8 “to reaffirm, in the strongest terms, our University’s continuing commitment to welcoming and supporting scholars, students, and staff from all parts of the world,” but did not announce any further steps besides ensuring access to remote classes for international students. Student leaders of UChicago Without Borders criticized the University's response as being lackluster.

After the turbulence of the proposal and rescinding of these changes—a cycle that has happened regularly throughout the past four years—student groups on campus restarted efforts to have the University designate itself as a sanctuary campus. Students and faculty have been pushing for sanctuary status since 2016, when Trump first announced his intention to break with the Obama-era immigration policy.

After being appointed as secretary of education in 2017, Betsy DeVos initiated several changes to Title IX policy. In November of 2018 it was announced that the Department of Education intended to change several aspects of Title IX with an eye toward bolstering the rights of the accused. Most notably, students accused of sexual misconduct would have the right to an in-person trial where they may cross-examine their accuser. Additionally, schools would be able to choose between a preponderance of evidence and clear and convincing—50 and 75 percent respectively—for the standard of evidence in sexual harassment cases.

In addition to shifting away from Obama-era regulation, such changes would be in conflict with Illinois state law, which does not allow for the victim and perpetrator to directly cross-examine each other.

The final version of the changes went into effect in May of 2020. They included a withdrawal of the initial cross-examination proposal to live hearings with representatives or legal counsel (rather than the victim and the perpetrator themselves), and limited liability to on-campus incidents, with the exception of fraternity and sorority houses.

In the aftermath of George Floyd’s murder, Black Lives Matter protests sparked in Minneapolis and spread around the country. As the demonstrations continued into June, Trump threatened to invoke the Insurrection Act of 1807 to quell them. After 62 days of protests in Portland, Oregon, the president deployed federal troops, ostensibly to protect federal buildings from being damaged during the protests.

Chicago was no exception with sustained protests throughout the city, including Hyde Park. UChicago students participated in protests and clashed with the Chicago Police Department at East 53rd Street and South Lake Shore Drive. Many reported violent encounters with the police—armed with riot gear and batons—as they attempted to disperse.

In response to the protests, the University limited campus access to essential personnel on June 1 and temporarily suspended shuttle services. Lee also addressed the student body via email in regards to the national turmoil, reaffirming the University’s commitment to diversity and inclusion.

“The deep alarm expressed by people throughout the country, including in our home of Chicago, reflects many decades of grief and anguish…. The vitality of the South Side is fundamentally linked with that of the University, and we esteem the deep relationships and partnerships that the residents of the South Side and members of the University community have built together.”