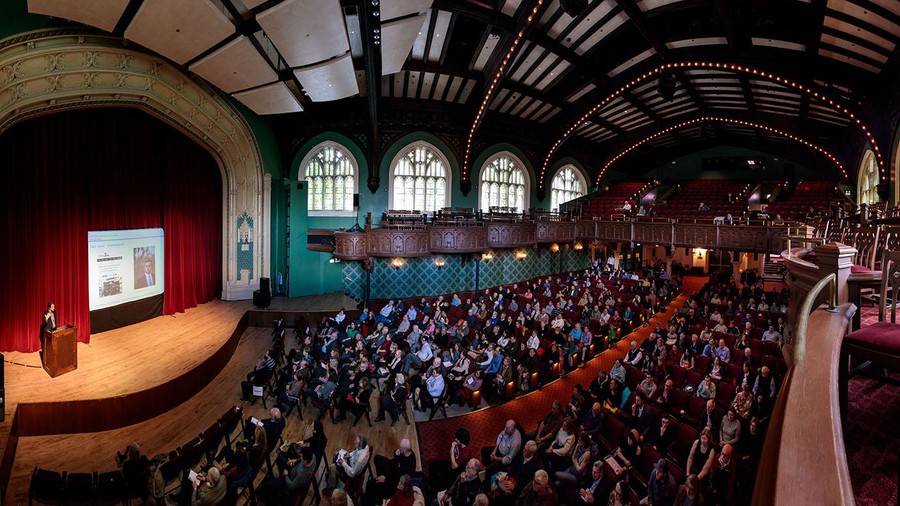 A crowd gathers to listen to an address at Humanities Day 2018. Humanities Day was held virtually this year due to the ongoing pandemic. Courtesy of John Zich / UChicago News.

The University of Chicago Division of the Humanities held the 40th annual Humanities Day on Saturday, October 17, exploring literature, art, music, philosophy, and other related disciplines. Talks given at the event covered topics such as the role of music in Jewish diasporas, the relationship between Mayan literature and colonialism, the role of women in portrayals of Italian Mafia, and American democracy.

Due to the ongoing COVID-19 pandemic, the event was held entirely over Zoom, consisting of six sessions over the course of the day. This year’s forum was not the first with virtual events, as the 2018 Humanities Day featured virtual, interactive “guided tours” of the South Side Home Movie Project’s digital archive in addition to in-person tours and presentations.

In past years, each session included as many as a dozen events, with each event featuring a single speaker. This year, however, each session featured just one event, and most were led by a group of several presenters. Despite the condensed format, capacity for attendance expanded significantly with the all-virtual format, allowing for a maximum of 10,000 attendees.

There were several presenters who had spoken at past Humanities Day events. Phil Bohlman, the Ludwig Rosenberger Distinguished Service professor in Jewish history, Department of Music, gave a talk with Christine Wilkie Bohlman, Lecturer in Piano in the Humanities Collegiate Division on Jewish music like the one he gave two years ago. Similarly, Will Boast, an assistant professor of Practice in the Arts, gave a talk about UChicago’s creative writing department similar to the ones that he has given during each of the previous three years.

The Humanities Day keynote address was delivered by Martha Nussbaum, the Ernst Freund Distinguished Service professor of law and ethics. An instructor in both the Law School and the Department of Philosophy, Nussbaum has published several works on social justice and civil liberties, including From Disgust to Humanity, which explores LGBTQ+ rights in the United States. Nussbaum was awarded the 2016 Kyoto Prize in Arts and Philosophy as well as the 2018 Berggruen Prize.

Nussbaum’s address, Animals: Expanding the Humanities, discussed the capabilities approach, a theoretical framework designed by Nussbaum and economist Amartya Sen, a Thomas W. Lamont University Professor and Professor of Economics and Philosophy at Harvard University, to help improve general worldwide well-being. She examined how the approach could be used to protect the habitats of animals and improve their general welfare.

Another session, titled Reinventing Democracy for the 21st Century, discussed heightened uncertainty surrounding democracy in the United States and described several proposals intended to strengthen democracy going forward. The forum featured Tracey Meares, Walton Hale Hamilton professor of law at the Yale University Law School; William Howell, the Sydney Stein professor in American politics at the Harris School of Public Policy; Diane P. Wood, senior lecturer in Law at the University of Chicago Law School and circuit judge of the United States Court of Appeals for the Seventh Circuit; and moderator Eric Slauter, deputy dean of the Division of the Humanities.

The discussion focused primarily on a report published by the Commission on the Practice of Democratic Citizenship, a bipartisan group of scholars, jurists, and writers gathered by the American Academy of Arts and Sciences, including Wood, who was appointed to the Seventh Circuit by former president Bill Clinton, and Yuval Levin, the founding editor of National Affairs. The report included 31 recommendations to strengthen American democracy, grouped into six general categories.

Howell, who wrote Presidents, Populism, and the Crisis of Democracy, criticized Donald Trump’s presidential administration and populist rhetoric. “Populism is a profound threat to the health of our democracy and populism is being channeled now through the presidency,” Howell said.

Wood discussed the existing system for campaign financing, which allows individuals and corporate entities to donate significant amounts of money both directly to candidates and to political action committees that promote particular candidates and legislation.

Meanwhile, Meares discussed the report’s extensive focus on action by the federal government, particularly on the topic of police reform. “There's a lot of focus on federal institutions,” Meares said. “There is nothing that the president really is going to do, other than make speeches that often make people angry but at the end of the day that doesn’t necessarily change how policing is carried out.”

A later event, titled Arts and the Academy, Then and Now, explored the rise of state-sponsored arts and language academies in France during the 1600s. These programs allowed for the French monarchy, led by King Louis XIII, to determine whether certain forms of art would be exhibited. The discussion was led by Larry F. Norman, Frank L. Sulzberger professor in the Department of Romance Languages and Literatures, and Richard T. Neer, director of the Franke Institute for the Humanities.

Norman described the way that Cardinal Richelieu, the First Minister of State under Louis XIII, used these academies to expand French influence during the 17th century. “Richelieu was building the economy of France” while simultaneously “making the French language the official language of Europe,” he said.

Neer, meanwhile, discussed the notion of an “academy” in relation to art, suggesting that many contemporary artists would prefer not to have their art described as being “academic.”

Neer also drew a distinction between French art, language academies, and the modern concept of an “academy.”

“It’s easy to think of an academy as something extremely conservative. In the 19th century, that was certainly justified,” he said, before going on to say that this characterization would be less accurate today.