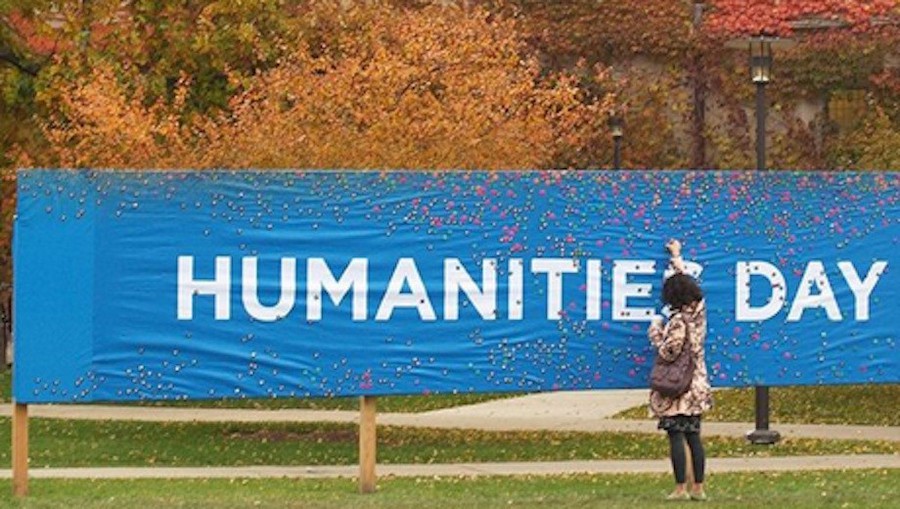 A banner promoting Humanities Day 2010. Humanities Day was held virtually this year because of the ongoing pandemic. Photo by Hannah Hayes of Tableau, the magazine of the division of the humanities at UChicago.

Since 1980, UChicago has welcomed visitors every October for a full day of events, performances, tours, and lectures presented by faculty in the Division of the Humanities. This October 17, the annual tradition celebrated its 40th anniversary, shifting to the virtual sphere in the face of a global pandemic. Rather than rushing from one building to the next to catch each presentation, Humanities Day 2020 visitors attended events remotely through Zoom.

Because it was conducted as a single Zoom webinar, this year’s Humanities Day included fewer presentations as different lectures could not be given simultaneously. However, the seven sessions that were scheduled over the course of the day guided viewers through a broad range of topics, including colonialism and crisis, gender dynamics within the Italian Mafia, and the history of the art academy. Additionally, in lieu of the in-person tours often offered by various cultural spaces around campus each year, Humanities Day 2020 compiled links to virtual and video tours made available online by the Smart Museum, the Renaissance Society, the Oriental Institute, and others. What is more, similar to the tours, all of the lectures are now available to watch online.

The day’s events commenced with a lecture about and performance of Viktor Ullmann’s final musical work, “The Chronicle of Love and Death of the Flag Bearer Christoph Rilke.” Based on Rainer Maria Rilke’s prose-poem of the same title, the piece was composed by Ullman in 1944 while in the Theresienstadt Ghetto (Terezín) concentration camp; he was murdered at Auschwitz soon after.

The piece was performed by Humanities Collegiate Division lecturer Christine Wilkie Bohlman and professor of Jewish studies Philip V. Bohlman, with the former on piano and the latter reciting the poem, after giving their lecture explaining the piece’s history, the technical challenges of performing it, and its significance today for the themes of exile, diaspora, genocide, and mounting nationalism. As they performed, numerous pieces of visual art were displayed on screen, further animating the performance.

While the second lecture of the day also examined creative work accomplished under conditions of crisis, its scope turned towards another part of the world and of history. In his lecture, assistant professor in the Department of English Language and Literature Edgar Garcia shared the research he conducted around the Popol Vuh, the indigenous K’iche’ Mayan story of creation, while quarantined six months ago. Having just taught a class about the Popol Vuh last winter, Garcia dove into this work under the anxiety of colonialism, setting it in dialogue with the world’s current state of emergency in a forthcoming book of essays.

Garcia studied what the Popol Vuh can teach us about modern-day catastrophes, turning to emergency as a site of socio-political and cultural emergence. Originally passed on through oral tradition, the Popol Vuh was transcribed by the Dominican friar Francisco Ximénez in the 18th century, entering a web of archives and purchases entangling it with the colonial powers devastating its authors, who incorporate their context into its narrative. Describing itself as Ilb’al, or an instrument for seeing, the book associates colonization with a cosmic darkness and the light of creation that disturbs it with a return to indigenous and counter-colonial worlds. As such, creation is revealed as innately linked to human creativity, unmarred by colonial obfuscations. Garcia explained how the transfer of power between colonized and colonizer is just one step in the creation of a world that is fundamentally Mayan.

Just as in previous years, Humanities Day 2020 also included a keynote lecture—this time by the philosopher and professor of law and ethics Martha C. Nussbaum, whose lecture posited an “ethical revolution” in the rights given to and laws legislated around animals. Nussbaum underscored the limitations of previous philosophical approaches to animal entitlement, including the “so like us” and “least common denominator” approaches. One figure she evoked in her arguments was Steven Wise, who, albeit not a philosopher, was a pioneer in animal law and insisted that the line drawn between humans and animals when it comes to personhood and autonomy was irrational and needed rethinking.

Other ideas Nussbaum challenged in her lecture were that of human superiority to animals and the notion that certain animals are deserving of rights due only to their proximity to humans. As the keynote reached its end, Nussbaum introduced her self-pioneered Capabilities Approach, expanding it to encompass and argue for the value and dignity of sentient beings other than humans. Generally, Nussbaum stressed the importance of adopting a worldview which emphasizes the importance of wonder and attunement, the fact that we share this planet with other animals, and that this approach is a direction—not a destination—and doesn’t tell us how to address particular areas of conflict.

Later on in the day, professor and the Director of the Italian Language Program Veronica Vegna presented a lecture analyzing the different roles of women within the Italian Mafia and how they are represented in cinema. Citing movies such as Roberta Torre’s Angela (2002) and books-turned-series such as Gomorra, Vegna discussed how cinema and other mass media reflect and shape our fundamental understandings of legality and other sociopolitical and economic issues. Putting side-by-side clips from motley movies and sociological studies and statistics, Vegna explored the ways in which women acted as a “two-headed Janus” in the Mafia, both sustaining its existence and acting as a potential threat, should they choose to betray it. And yet, despite their instrumentality, women have historically been rendered invisible in the Mafia, their labors unacknowledged—as in many other areas of society.

Other Humanities Day lectures included a history of art and academia, a group discussion of 21st century democracy, and a panel on “Re-Imagined Communities” which involved several writers reading their recent work.

In spite of the resulting Zoom fatigue, Humanities Day 2020 offered a compelling series of lectures, performances, and readings of contemporary creative work.