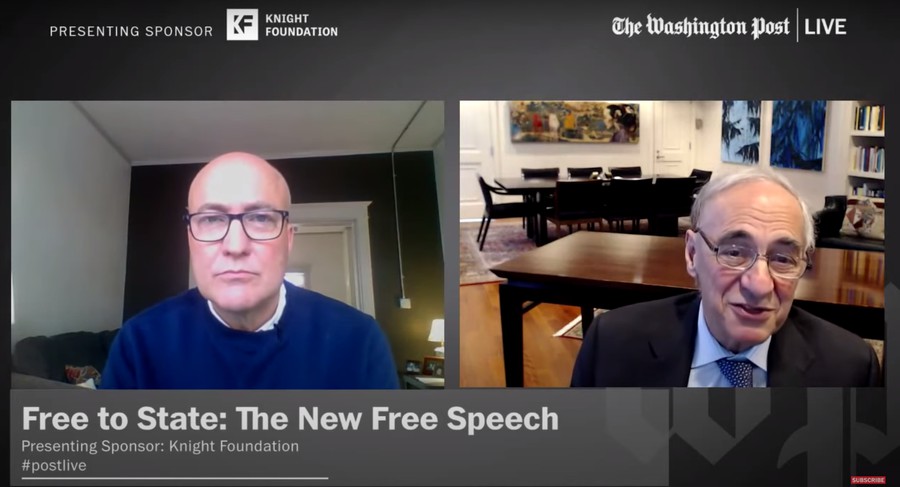 On October 21, President Zimmer spoke about the Chicago Principles at the Washington Post's webinar “Free to State: The New Free Speech,” hosted by "Opinions at Large" Editor Michael Duffy.

University of Chicago President Robert J. Zimmer spoke to the Washington Post last Wednesday. In an hour-long livestream event entitled “Free to State: The New Free Speech,” Zimmer emphasized that now more than ever, universities across the country should evaluate their commitment to free expression on their campuses.

Zimmer, who was introduced by Duffy as the “standard bearer on the subject of free expression on college campuses,” spoke about the genesis of the Chicago Principles of Free Expression, their effectiveness, and the current climate surrounding free speech across college campuses and in America as a whole.

“Free expression, open discourse and intellectual challenge [are] absolutely critical to the environment of a great university,” Zimmer said. “[The Chicago Principles] were designed to actually capture a longstanding set of beliefs, and a longstanding set of reactions of the University of Chicago since its inception in the 1890s.”

The Chicago Principles, which are outlined in the Report of the Committee of Freedom of Expression, state that the University “is committed to free and open inquiry in all matters, and guarantees all members of the University community the broadest possible latitude to speak, write, listen, challenge, and learn.” The report also emphasizes that “it is not the proper role of the University to attempt to shield individuals from ideas and opinions they find unwelcome, disagreeable, or even deeply offensive.”

President Zimmer stressed that the University believed in the Chicago Principles for many years before its official inception. However, he acknowledged that they were put in place at a time when the country was seeing an increase in controversial speakers being disinvited from college campuses after receiving negative backlash from various student and faculty groups. “We knew that that was not us,” Zimmer said, “and we needed to say it.”

Yet despite his support for free expression on campus and concern about speakers being disinvited by universities, Zimmer expressed his disapproval of an executive order President Trump signed in March that stated that colleges would lose federal funding if they did not protect free speech on campus. The order was signed in the presence of over 100 student activists who claimed that their conservative views were being suppressed at universities.

“The idea that the federal government was now going to take a part in deciding what it is that’s appropriate to be said on campus, I viewed as deeply problematic,” Zimmer said.

Zimmer stressed that the University’s policy on free expression is especially important given the current political climate. “We are certainly in a challenging time in terms of discourse in this country in general,” Zimmer noted. “The ambient environment in the country certainly has an impact on people.”

“So, you’ve got all these stresses on the system, and one of the great dangers with respect to free expression, is people feeling very morally sure of themselves and dismissive of other people’s views,” Zimmer said. “That’s a very dangerous slope.”

He noted that approximately 70 universities have adopted or endorsed the Chicago Principles since they were established in 2014. Zimmer made it clear that when schools don’t explicitly outline their commitment to free expression, like UChicago has, those schools struggle.

“When you hand out a diploma, is there a clear sense to what that means?” Zimmer asked of these universities. “Does it mean that students have spent some time in class and taken some exams, or does it have a deeper meaning around the nature of their education and what are the intellectual skills and habits of mind that they’ve been able to develop through their education? If you don’t have those kinds of fundamental principles, then you’re just stuck in an argument.”

Zimmer said he hopes that the Chicago Principles have bettered students’ educational experience by allowing them to exercise free expression and, “reinforced this sense on campus that we are a place of constant challenge, constant argument, constant exploration of ideas and the belief that clarity derives from the clash of ideas, not from deference to someone else’s ideas.”