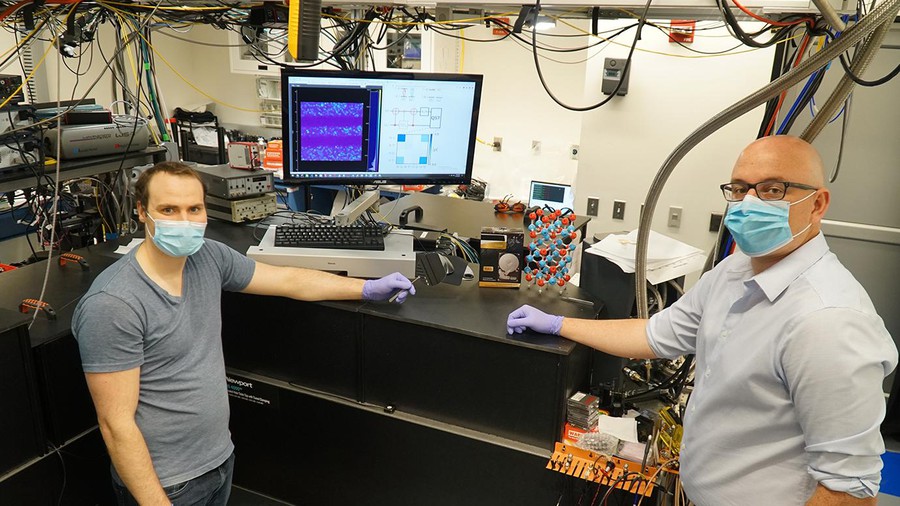 Researchers Alexandre Bourassa (left) and Chris Anderson (right) next to their quantum measurement instrumentation at the University of Chicago Pritzker School for Molecular Engineering.

A recent study led by doctorate students at the Pritzker School of Molecular Engineering demonstrated that a semiconducting material common in classical electronics can reliably transfer and store information from one quantum device to another.

Like normal computers, quantum computers rely on quantum bits (qubits) to store information. Unlike normal bits, which can store only one state (0 or 1) at a time, qubits can store either state at the same time.

To send qubits across physical space, quantum computers use solid-state single photon emitters. Until recently, experimental quantum computers relied heavily on nitrogen-vacancy (N-V) centers in diamonds for communication between quantum nodes. According to the researchers, in addition to being expensive, diamonds are difficult to mold into quantum devices.

“For a very long time, people thought N-V centers in diamonds were a unique system,” said Alexandre Bourassa, one of the lead researchers on the project. “They could manipulate it nicely and it has this sort of optical interface that allows you to talk to light...but the biggest concern is in terms of practicality. Diamond is a very difficult material to do fabrication on. To make small quantum devices is very difficult with diamond.”

Bourassa worked with Chris Anderson, a former National Defense Science and Engineering Graduate (NDSEG) fellow and scientist at the Pritzker School. Anderson demonstrated that the same task could be accomplished by defects in silicon carbide: a cheaper, easier to manipulate, and more robust alternative to diamond. Both Bourassa and Anderson are affiliated with the Awschalom Group, which specializes in implementations of quantum information.

While the results of the study confirmed that silicon carbide is a viable material for constructing quantum nodes with a long memory capacity, its large-scale applications are still unclear.

One possible application is a Chicago quantum internet, which is currently under development by the University of Chicago and the Argonne National Laboratory. Such a network could have wide-ranging effects.

“Take yourself back and think about what was using a computer like when you didn’t have the ability to connect to thousands of other computers instantly across the globe,” Anderson said. “[The internet] really changed the way that we communicate, the way that we compute, the way that we share information. The technology we’re building is sort of the quantum equivalent of that massive paradigm shift.”

The current challenge in constructing a quantum internet resides in the ability to transfer packets of quantum information across long distances without loss of data. Anderson compared the issue to a similar one in the field of telecommunications.

“If you think about sending your friend in Germany an email, sometimes that email goes through an underwater, interseas fiber optic cable that goes underneath the Atlantic and has your email encoded in little packets of photons. The problem is that fiber is really long, and there’s always losses in that system. It turns out that along the networks in the U.S. and in the world, and in these interseas cables, they have these little boosters that boost the signal and let it get to its final location,” Anderson said.

According to Anderson, the silicon carbide that they have been researching may provide material for a quantum repeater.

“What [a quantum repeater] needs to do is it needs to take single photons and hold on to them, to then release them at a deterministic time later,” Anderson said. “You need an interface to single photons, and you need something that can store that quantum information for a long time. And these are the two things that we’ve demonstrated.”

However, a working quantum repeater has yet to be built. “If you compare this to the development of classical electronics, we’re at the stage of trying to figure out how you build a transistor,” Bourassa said. “It’s exciting because everybody is exploring different avenues to make this quantum device, and nobody knows where it’s going to end up.”