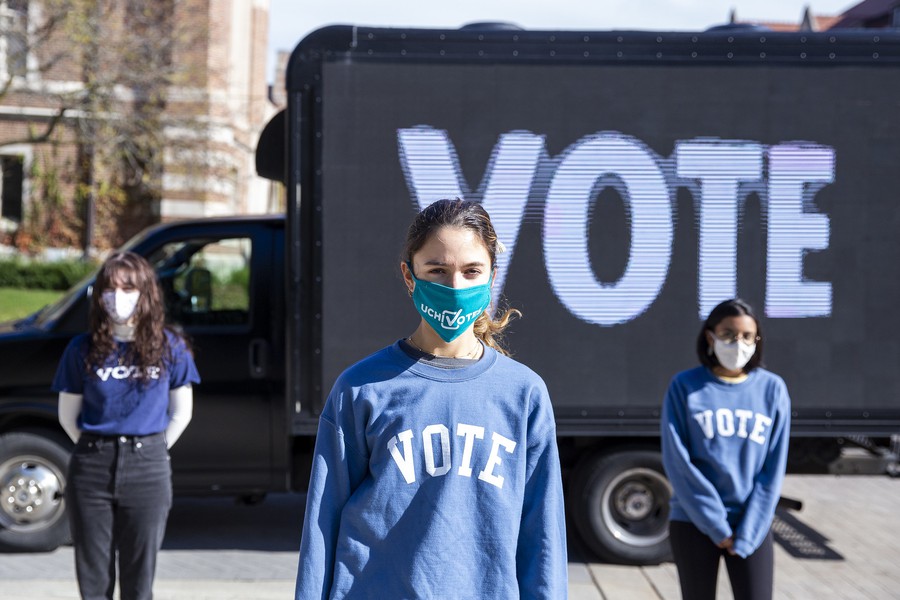 UChiVotes, the non-partisan voter engagement initiative housed in the Institute of Politics (IOP), set up information tables across campus on Saturday to encourage early voting. They also directed prospective voters to Ray Elementary School, an early-voting site in Hyde Park operating seven days a week, from 8:30 a.m. to 7 p.m. on weekdays and 9 a.m. to 5 p.m. on weekends.

“Our goal is to make UChicago the number one voting campus in America,” said Julianna Rossi, a third-year in the College and the UChiVotes Chair. “The number of young people who vote is really abysmal, and we knew that UChicago students could do better than that.”

She went on to say that even people who are not interested in politics still have many reasons to vote. “Everyone has a why. There is something in the process of voting that everyone cares about, whether it’s criminal justice or healthcare, or anything. Even your local sewage system is controlled by the aldermen in Chicago. So there’s something that everyone cares about in voting, no matter if you say you don’t even care about politics; there’s something in there that you care about.”

The organization, which has reached out to over 600 faculty members and 150 RSOs since they started in 2018, sought to further their mobilization efforts by tabling outside of every residence hall on campus this Saturday. Throughout the day, UChiVotes members answered student questions about voting and provided resources for mail-in ballots. 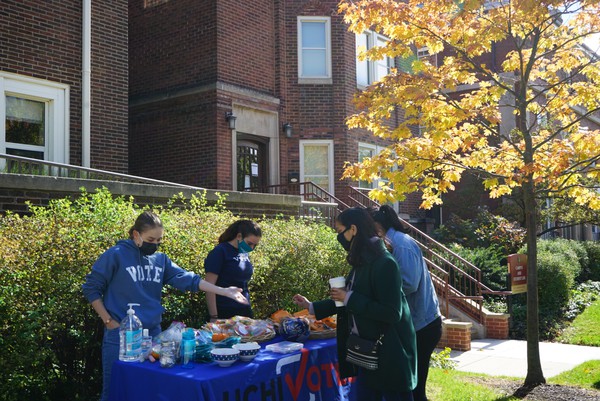 UChiVotes members tabled outside the Institute of Politics (IOP) and answered student questions.

The day’s events were planned in concurrence with a national Vote Early Day in an attempt to increase the momentum for mail-in voting in the days before the election. Early and mail-in voting options are especially important in this election because COVID-19 has raised safety concerns about in-person voting.

“This year, voting is complicated because of COVID-19,” said fourth-year Aliza Oppenheim, UChiVotes Vice Chair. “So many different states have different deadlines, different rules for voting by mail. Some states are all vote by mail, some states you have to request it specially, so that’s why voting early for me is especially important, [in addition to] making sure that students are educated in that process, because I know that I felt very alone and confused when I couldn’t figure [it out]. Voting is the minimum you can do to have a say in what’s going on, to have a say in your community from the national to the local level.”

UChiVotes will continue to advocate for voting until election day. “We keep posting on our social media, we have text banks every week a couple times a week where we reach out to people and make sure they all have a plan to vote,” said Sophia Michel, a member of the Voting Ambassador team, “and what all of us can do is just make sure that your friends are voting and your family is voting.”