Two weeks after the Nov. 4th, Holder's prediction of widespread and unsubstantiated claims of voter fraud in the aftermath of the presidential election has been proven correct. 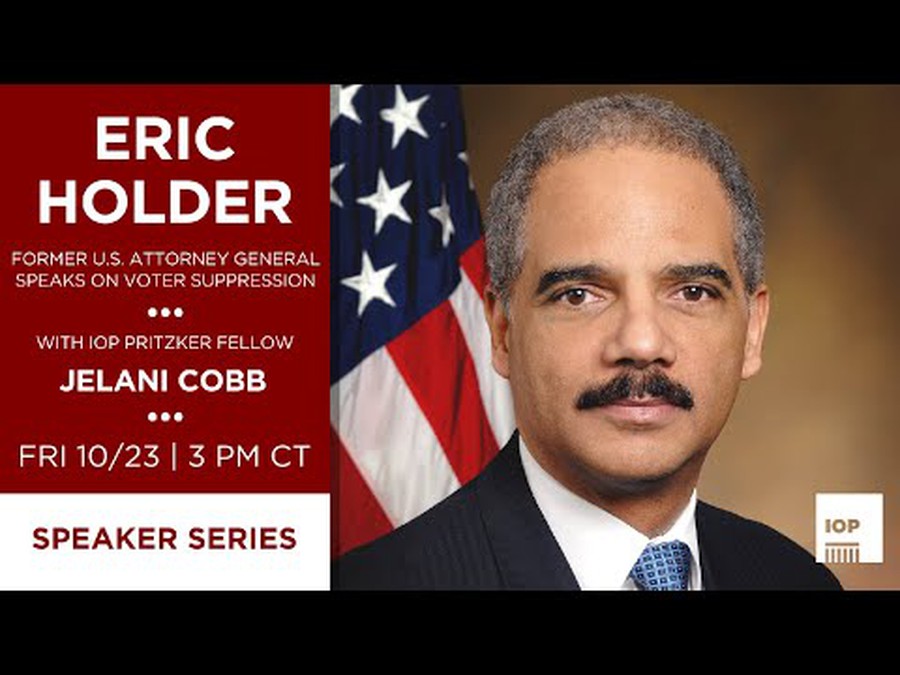 Eric Holder spoke at the IOP in advance of the 2020 Presidential Election.

Speaking in advance of the presidential election on November 3, former U.S. Attorney General Eric Holder dismissed fears of widespread voter fraud as “nonsense” and warned that Trump-backed initiatives, such as poll watching, could suppress voter participation. Holder expressed these views at a virtual conversation on October 23 at the Institute of Politics on the integrity of American elections with distinguished author and Columbia University professor Jelani Cobb about voter suppression and the integrity of United States elections.

Holder was the Attorney General during the Obama administration and is the first African American to have held the position. Holder is a long-time supporter of upholding voting and civil rights, acting as a proponent for the 2006 re-authorization of the Voting Rights Act of 1965.

Holder began by expressing what he was most concerned about in our current political climate. One part of the country, Holder said, feels the need to win the election through cheating. Unnecessary voter ID laws and weakening postal services are examples of tactics that are being utilized to undermine the integrity of having fair elections by suppressing voter turnout. Other efforts, Holder said, would be more brazen.

Holder mentioned the “Trump Army”: volunteers recruited by Republicans to watch ballot drop-offs and early voting locations, in attempts to gather evidence to prove President Trump’s claims that voter fraud will be widespread during the 2020 election. Political moves like these, Holder argues, are a part of a national plan that will suppress the votes of certain demographics, including Democrats, people of color, and young voters.

While Holder’s fears of a “Trump Army” on election day did not materialize, in the aftermath of the election, there are still concerns that Trump’s rhetoric could encourage his more radical supporters to interfere with a contentious election count. On Wednesday, Trump supporters “converged on vote-counting centers in Detroit and Phoenix” chanting slogans such as “stop the count” and “stop the steal,” according to the Chicago Tribune.

When discussing the integrity of the election, Holder stated that claims that the election will be undermined due to widespread voter fraud are nonsense; “all the studies have shown that, empirically, the incidence of in-person voter fraud is infinitesimal and is not consequential…The Brennan Center did a study and said that you’re more likely to be hit by lightning than cast an in-person fraudulent vote.”

Holder’s remarks have taken especial prescience in the aftermath of the presidential election, as President Trump has alleged widespread voter fraud and launched multiple suits in key battleground states.

Speaking directly to the audience, Holder implored Americans to avoid silencing the vote of their fellow citizens just to gain political points. Drawing parallels from historical context, Holder says that efforts to suppress the votes of certain groups are inextricably linked to this country’s history of systemic racism. Particularly in the South, African Americans had to face threats of violence in attempts to have their voices silenced. Now, these scare tactics may also be faced by members of the white community, Holder said.

To address the problem of voter suppression, Holder said that we can start with passing the John Lewis Voting Rights Act and abolishing gerrymandering. For the voter, Holder urges people to vote for candidates who will undo voter suppression laws. “The primary thing to do is to vote. We have to realize that these voter suppression mechanisms and statutes and mechanisms…they’re just laws. They’re just regulations. They can be undone. Voting for people [both Republicans and Democrats] who will stand behind a fair electoral system, those are people worthy of our support.” Citizens and lawmakers must take action to “strengthen our democracy,” Holder notes. Even if such actions mean short-term partisan setbacks, they are crucial in upholding a strong democratic infrastructure.