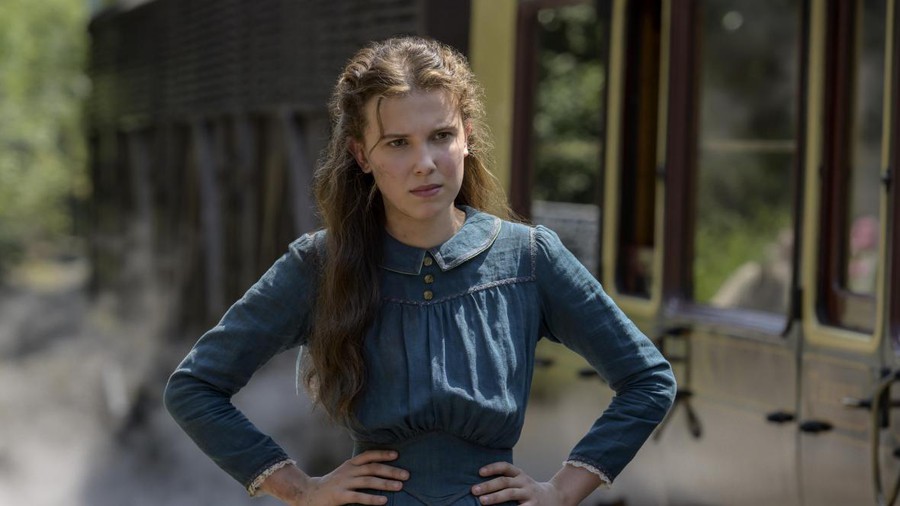 As Enola (Millie Bobby Brown) deepens her search, she discovers troubling facts about her mother’s activities and uncovers a conspiracy to murder Tewkesbury.

Courtesy of The Times

This opening line kicks off Enola Holmes’s energetic first scene. An upbeat rhythm plays in the background. The titular, fourth wall–breaking protagonist (Millie Bobby Brown) hurriedly rides a blue bicycle on a meadow path. She then turns to the camera to directly address the audience, cueing an expository montage that cuts between artistic images visualizing her backstory, flashbacks to her childhood education, and scenes of Enola riding the bike in the present day. All you need to know about the movie is right here.

This distinctive opener is characteristic of what makes Enola Holmes unique. The movie about the younger sister of fiction’s most famous detective is rich with these engaging, fast-paced scenes. They lean heavily on the highly expressive, witty performance of Millie Bobby Brown (Stranger Things). As both the main lead and the originating producer whose efforts largely brought the movie into existence, Brown is central to all that Enola Holmes does right.

The movie follows Enola’s search for Eudoria Holmes (Helena Bonham Carter), her missing mother, as she also tries to protect the teenage lord Viscount Tewkesbury (Louis Partridge). Meanwhile, Enola has to evade her older brothers, Mycroft (Sam Claflin) and Sherlock himself (Henry Cavill), who try to force her to attend a girl’s boarding school. As Enola deepens her search, she discovers troubling facts about her mother’s activities and uncovers a conspiracy to murder Tewkesbury.

This star-studded cast is arguably the movie’s biggest strength. While Brown’s performance is praiseworthy, Claflin and Cavill are also strong in their portrayals of the two Holmes brothers. As the oldest Holmes child and therefore proprietor of the estate, Mycroft jealously guards his power over his two more talented siblings. His interactions with Sherlock and Enola make him come across as thoroughly dislikable, and his demands of Enola to conform to his patriarchal vision are the impetus for her escape to London.

It is through Enola’s attempts to overcome the cultural barriers of her youth and gender that we see the movie’s thematic message. As the story progresses, she learns that choosing her own attachments is the mark of a truly independent woman. Though at the beginning she has internalized her mother’s many admonitions to remain independent from men, she is naive to the world and unsophisticated in her expressions of feminism. But while she shifts focus from finding her mother to protecting Tewkesbury, she grows in confidence as a detective and begins making independent judgments about what is meaningful to her, contrary to both the dictates of her mother and society. In this way, Enola Holmes is a coming of age story about the transition into womanhood.

These themes of independence make Cavill’s Sherlock Holmes especially interesting as a foil to Enola throughout the story. After all, who is more independent than the world’s most famous detective? Cavill’s performance of Sherlock criticizes the character’s detachment from the world and his choice to find meaning strictly within solving mysteries. The movie does an excellent job deconstructing the privilege of masculinity that allows Sherlock to lead a sleuthing lifestyle, while also interfering with Enola’s wish to do the same.

Sherlock’s actions before and during the film—having been absent from Enola’s life for more than a decade, as well as refusing to stand up to Mycroft’s treatment of her—are repeatedly criticized by other characters. In one particularly compelling scene, Sherlock threatens Edith (Susan Wokoma), a member of Eudoria’s suffragist group, to obtain information about his mother’s location. In response, Edith launches into an impassioned speech about his apathy toward politics and social problems, leaving Sherlock visibly stricken. Cavill plays the famously analytical and inexpressive Holmes remarkably, introducing a subtle emotionality into the character over time, as Sherlock begins to legitimately care for Enola by the film’s end.

This thematic and narrative complexity, supported by excellent portrayals of all the Holmes siblings, is also very laudable. The script makes great use of these performances. Enola in particular was often very witty and comedic. Several scenes contained character exchanges that made me laugh out loud. These comic scenes were supported by an audibly whimsical score, such as the energetic rhythm we hear in the opening. The movie makes further use of clever audio techniques to lend pace or splice together different scenes by overlaying the heard conversations of one set of characters onto the viewable actions of another.

But the most distinctive flourish from director Harry Bradbeer is his creative delivery of information throughout the film. During these moments, he leans heavily into Brown’s ebullient portrayal of her eponymous character. Several artistic montages narrated by Enola deliver crucial exposition, including the backstory of the Holmes family and similar information about Tewkesbury’s relatives later on. Bradbeer employs a similar technique several times to communicate Enola’s thought process as she unscrambles anagrams. In addition, the many flashbacks to Enola’s childhood are the main vehicle of her mother’s characterization. These visual techniques of conveying information outside the direct narrative are very engaging and memorable, and they culminate in a distinctive directorial style.

But these brief exits from the present narrative also weaken the film; Bradberry simply utilizes them too much. Though the montages are more occasional, it feels as if the movie cannot go more than a scene or two without a flashback to some part of Enola’s childhood or a narrative segment explaining Enola’s most recent logical leap. Bonham Carter’s Eudoria merely has a single scene in the movie that is not a flashback. After the seventh or eighth flashback and montage, they become distracting. While this practice does make good use of Brown’s performance, it hinders the rising action as Tewkesbury’s mystery takes center stage.

This distraction exacerbates another flaw of the film—it spends too much time developing Enola’s efforts to evade capture from Mycroft and Sherlock, the film’s major subplot. Often this happens at the expense of the main plot surrounding the mysteries of Eudoria’s disappearance and Tewkesbury’s attempted murder. Consequently, the characters at the center of the story are too weak to make it truly compelling. The fact that Eudoria has a single scene in the present-day narrative strongly diminishes her emotional significance. Similarly, though Partridge brings a good performance as Tewkesbury, his scenes are mostly filled with action, leaving little time to flesh out why his character is worth caring about.

Perhaps the greatest weakness of the film is its painful obviousness. The strong themes and characterization lack subtlety and depth. The movie breaks a cardinal rule of filmmaking: “show, don’t tell.” In almost every flashback Eudoria delivers some platitude to lend thematic significance to the scenes they are spliced into. And Enola’s extensive narration throughout the film leaves little uncertainty about her feelings or thought processes, especially when she is solving some puzzle. While it might seem unfair to ask for more subtlety from a movie clearly aimed at younger audiences, Enola Holmes often operates at a higher level of complexity that warrants such a request. A little more nuance in its communication of themes and character actions would go a long way to improve an already excellent film.

And that is what Enola Holmes is—excellent. Sporting compelling themes, excellent performances from the lead cast, and an engaging directorial style, this story about Sherlock Holmes’ younger sister offers a lot to viewers of all backgrounds. While some missteps in the script may weaken the narrative and distract from the plot, the weight of the movie’s strengths and weaknesses falls firmly into the praiseworthy. I give Enola Holmes an 8/10 and am excited to see where this franchise goes from here.