The Former Federal Election Commission member, whose claims of voter fraud have been widely disputed, warned that voter fraud would be exacerbated by the increase in mail-in voting during an event at the Law School on October 23rd. 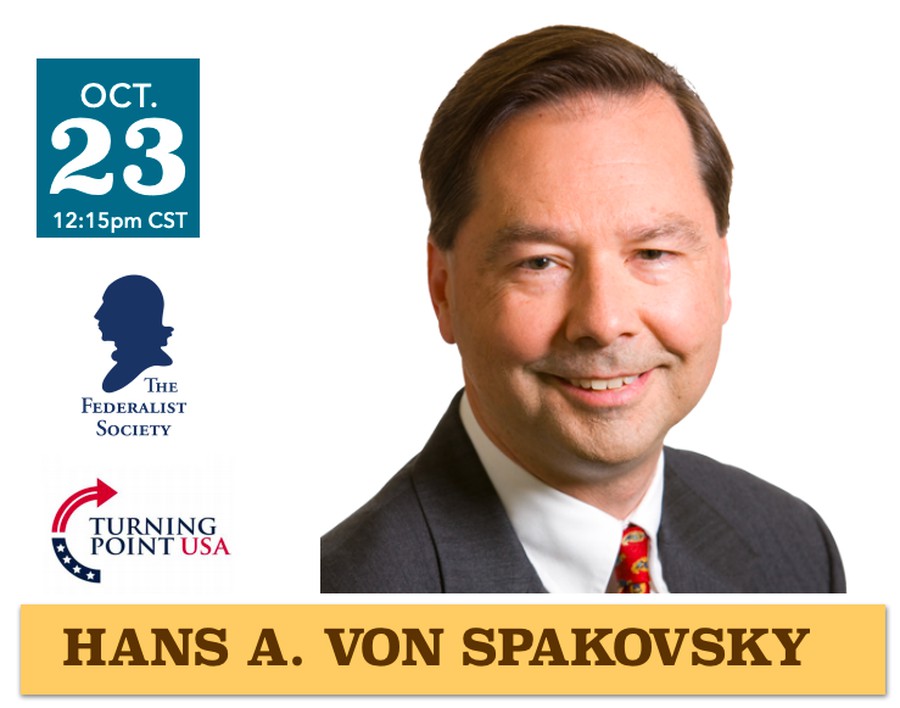 Former Federal Election Commission (FEC) member Hans von Spakovsky warned that mail-in voting would increase voter fraud during his talk at the University of Chicago Law School last Friday. The event, "Election Integrity and Voting Rights," was hosted over Zoom by the Federalist Society for Law and Public Policy Studies, an organization of conservative and libertarian law students.

Von Spakovsky is a senior legal fellow at the Heritage Foundation, a conservative think tank in Washington D.C. Before joining the Heritage Foundation, von Spakovsky worked for the Bush Administration, first in the Department of Justice’s Civil Rights Division, then on the Federal Election Commission. He is also a frequent contributor to Fox News and co-author of the book Who’s Counting? How Fraudsters and Bureaucrats Put Your Vote at Risk. Von Spakovsky was appointed as a commissioner for the FEC by President George W. Bush on December 15, 2005 and served from January 2006 to December 2007.

The event also featured J. Christian Adams, a conservative lawyer and author. Adams is the President and General Counsel of the Public Interest Legal Foundation and the founder of the Election Law Center, PLLC.

In his opening remarks, von Spakovsky emphasized the prevalence of election fraud and the lack of accurate statistics surrounding this issue. He cited the Heritage Foundation’s election fraud database, which found evidence for about 1,300 cases of voting fraud in general and local elections from 1982 to 2020. Von Spakovsky claimed many more cases go unnoticed. “All too often, these cases are not pursued or investigated by law enforcement, which unfortunately doesn't seem to have a lot of interest in doing that,” he said. “There's plenty of evidence of other potential cases that haven't been investigated.”

However, many of von Spakovsky’s claims about voter fraud have been disputed. On October 20, PBS Frontline, in conjunction with USA Today and Columbia Journalism Investigations, reported that von Spakovsky's Heritage Foundation database was misinformed. "Far from being proof of organized, large-scale vote-by-mail fraud, the Heritage database presents misleading and incomplete information that overstates the number of alleged fraud instances and includes cases where no crime was committed."
The Heritage Foundation responded that the allegations made in the PBS report were false. “The database is thoroughly sourced, systematic, accurate, and based on verifiable information with detailed references to government documents and media reports,” von Spakovsky said in a statement.

The Brennan Center for Justice, a policy research institute at NYU Law School, also examined the Heritage Foundation database. Their analysis, released in September 2017, concluded that the Heritage Foundation’s claims of voter fraud are overstated. “A close review of the database reveals that it substantially inflates and exaggerates the occurrence of voter fraud,” the report said. “There is nothing in the database to confirm claims of rampant voter fraud. In fact, it shows just the opposite.”

During his talk, von Spakovsky also claimed that more egregious instances of interference and fraud had occurred during the past several years, including groups of illegal immigrants conspiring to commit voter fraud, people pouring lighter fluid into absentee-ballot drop boxes, and women voting twice by first using their maiden names and again under their married names.

Von Spakovsky expressed the need for legislation that requires citizens to show a photo identification in order to vote. “Voter ID is just one of the reforms that we need to address the vulnerabilities in our system,” he said. He claimed that voter ID laws in Indiana and Georgia actually increased voter turnout. He also noted that requiring IDs at voting locations sped up the voting process.

ProPublica, a nonprofit newsroom which focuses on investigative journalism, highlighted von Spakovsky’s work with GOP officials, which often excludes Democratic legislators. In their article, ProPublica writers disagreed with von Spakovsky. “Experts have said voting by mail carries little risk of fraud. Since it is widely believed that more Democratic voters will vote by mail than Republicans, von Spakovsky’s proposals, if adopted, could suppress Democratic turnout in one of the most consequential presidential elections in a generation.”

Von Spakovsky addressed his critics. “Voter suppression is not a legal term…It’s a made-up term. This was made up by the progressive left—I think through focus groups—because it sounds so sinister. And what they do is they use that term to apply to any election reform that they don’t like,” he said.

Adams also voiced concerns about the recent increase in executive orders and judicial action being used to override existing legislation. He argued that Democrat-controlled legislatures were taking advantage of the COVID-19 pandemic to change laws, especially those related to voting.

According to Adams, certain state governments, such as Virginia's, are subverting democratic processes. “They're wrecking the will of the people through judicial action, through legislation, through edicts. And that’s not how it’s supposed to work in this country,” he said. “You're seeing America’s constitutional structure clashing with people who will do anything to get power.”

In order to improve election administration, von Spakovsky said that states should limit mail-in voting when possible and add around-the-clock security to ballot-drop boxes if necessary. “Unfortunately, showing concern about all of this makes the media and others label you as a voter suppressor, which isn’t true. My only motive working on this is to make sure we have fair and secure elections.”

The subheading of this article has been modified to reflect the contested nature of Spakovsky’s claims regarding election fraud.