“The Social Dilemma”—Or the First Step Towards a Brighter Future? 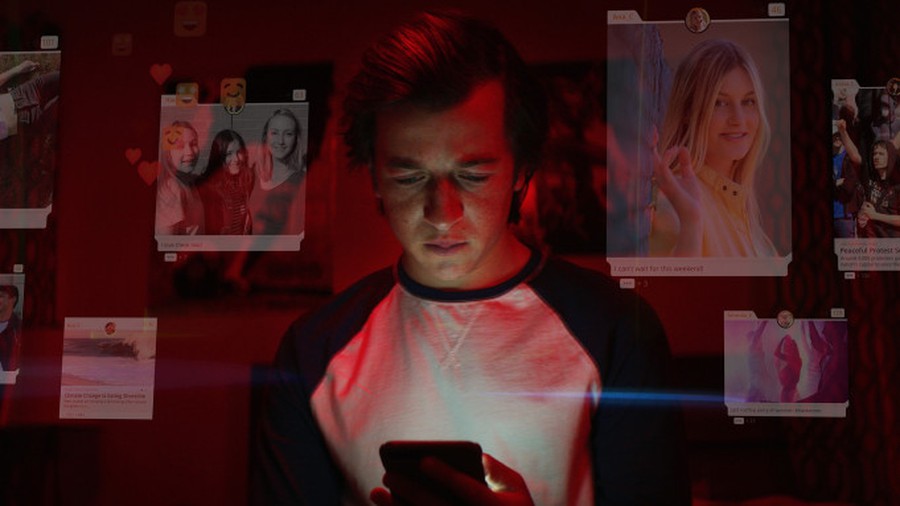 Netflix's "The Social Dilemma" presents a social media infrastructure where all is not well, but points us toward an optimistic future.

While technological innovation has altered society and human psychology for centuries, never before has a revolution impacted so many people in so little time. Never before have a handful of Silicon Valley programmers had the power to alter the very fabric of society with a few lines of code. Though these programmers began their innovations innocently with an eye towards a future of technological prosperity, in reality corporations have corrupted their initial dream by implementing business practices with detrimental impacts on the human psyche. Jeff Orlowski’s 2020 Netflix documentary The Social Dilemma therefore makes the case for why we must find a solution to the problem of manipulative, addictive, and user data–driven technology before the world is engulfed in flames of polarization, truth-denial, dramatically increased self-harm and suicide rates, mass loneliness, and surveillance capitalism.

Is the world truly on a fast track towards an apocalypse, or are we simply working out the kinks (albeit massive ones) of an infantile, largely unregulated field? Given that introducing any radically new product has inevitably invited a period of unrestricted mayhem and chaotic usage before regulation by authorities, can’t we recognize that social media has been publicly available for hardly more than a decade and is, as such, only in its first stage of development? For example, following the introduction of the automobile in the late 1880s and ’90s, the road was a dangerous and bloody place. Accidents abounded, many died, and traffic laws were essentially nonexistent. Fast forward to today, and the current blend of a coherent network of laws, traffic lights, and new vehicle safety features all mean that present-day streets are a far cry from what they used to be. Why should social media be any different?

Tristan Harris, former design ethicist at Google turned cofounder of the Center for Humane Technology, and Jaron Lanier, founding father of virtual reality—the whistleblowers behind The Social Dilemma—have strongly campaigned for such regulation of social media. They have always sought to expose the evils of unchecked industries in Big Tech and adjudicate them in the court of public conscience. With humanity’s best interests at heart, they strive to fight to ensure that the technology we invent is on our side. These whistleblowers echo Upton Sinclair’s expose of the practices of the meatpacking industry in the early 20th century, or the more recent Edward Snowden leak about NSA’s surveillance program.

However, we must be careful to avoid too much optimism; technology is integrating into society at an unprecedented rate, often with detrimental consequences. The film’s arguments have floated about in the ether for a few years (due in large part to the efforts of Harris and others like Chamath Palihapitiya, Aza Raskin, and Shoshana Zuboff), but never before have the pitfalls of the current system of social media been so succinctly, dramatically, and urgently broadcasted to such a large audience.

In one of the most sobering moments of the film, Jonathan Haidt, social psychologist and popular author, shared that the rates of suicide and self-harm in preteen and teenage girls have skyrocketed since 2009, the year that social media was first made available on mobile. For teenage girls, the rate of non-fatal self-harm rose 62 percent; for preteen girls, 189 percent. Since the last decade, the suicide rates of these groups have risen 70 percent and 151 percent respectively. These are startling numbers and it is difficult to contest the claim that social media is the primary cause of these spikes.

The film does not limit itself to statistics or abstract opinions. It also depicts a family’s struggle to reconcile technology use with real world relationships. This subplot grounds the troubles facing society in a concrete microcosm that illustrates a relatable example of technology addiction, even if it comes off as a little melodramatic and cheesy. In one telling but unintentionally comedic scene from this story, a preteen girl (Sophia Hammons), her father (Chris Grundy), and her brother (Skyler Gisondo) are asked by her mother (Barbara Gehring) to lock their phones away in a container during dinner. A few minutes into the meal, the girl stands up, disappears out of frame, and, a few seconds later, dons a hammer and goggles in the background. (We see that her attention span is ironically at least large enough to listen to her science teacher’s lectures on lab safety, which is one of the few bright notes in the movie). She ends up smashing the container and retrieving her phone, but in the process she breaks her brother’s screen.

The broken screen jumpstarts the rest of the story’s arc. The mother tells her son that if he can go a week without his phone, she will buy him a replacement screen. Three days into the week, however, he finds out via phone that his ex-girlfriend is in a new relationship. Scorning his mother’s promise, he gets sucked into an all-too-familiar YouTube rabbit hole focused on a fictitious political movement called the “Extreme Center,” a satirical take on the levels of absurdity and confirmation bias that permeate extremist politics today.

As he delves deeper into the political movement, he begins to forget about his relationships, and eventually winds up attending an Extreme Center rally, where he and his Luddite older sister (Kara Hayward) are arrested.

The blend of a dramatic narrative, stylized animation, and a barrage of concurrent opinions from concerned experts of their fields serve to make the film engaging, informative, and terrifying all at once. The soundtrack, reminiscent of the elongated and ominous tones of 2010’s similarly named The Social Network also serves to create a sense of opaque uneasiness, and is thus the perfect choice for this kind of documentary.

The rhetorical choices go wrong, however, when the filmmakers exaggerate the scope of some problems and attribute too much responsibility to Big Tech. For example, the teenage boy is often depicted as a lifeless doll whose attention is averted from one site to the next at the beck and call of a trio of corporate puppet masters. While understandable that the filmmakers would hyperbolize his plight, their overdramatization is a symptom of one of the few ideological problems with the movie: it places too much blame on Big Tech, and not enough on parents and kids themselves.

The film also sometimes forces a singular viewpoint issue on the audience, which can backfire. At one point, Roger McNamee, an early investor in Facebook, says, “If you want to control the population of your country, there has never been a tool as effective as Facebook.” This claim seems fundamentally untrue. Yes, Facebook can be an incredibly damaging tool, one that has been used to disrupt democracies and fuel conspiracy theories, but it can also liberate people and expose them to vast swaths of previously unknown information.

So should we all lose our minds over our collective exploitation by faceless corporations and quit social media as soon as we can? No, we should (and certainly will) not. What we should do, however, is become more mindful consumers and continue to voice criticisms about the ways that businesses are manipulating their customers. The Social Dilemma is a great example of this criticism, as it paints a harrowing picture of the current track we are on due to a lack of large scale reform. It does not, however, depict the long term future of humanity, because with prolonged efforts for change, this dilemma can be turned on its head. A few lines of code by a humanistic programmer may someday spark a new revolution, one that leads us out of this mess and towards a technological utopia.