Breaking: King Princess Is Annoying, but Her Concert Was Fun Anyway 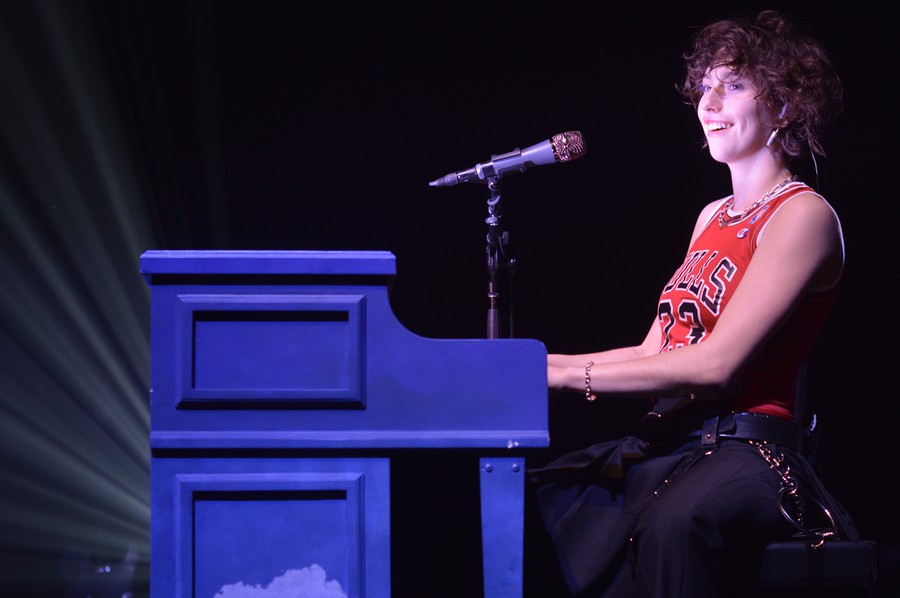 This time last year, I walked out of the Metro Theater, King Princess’s second stop on her Pussy Is God tour, buzzing with the collective energy of every Chicagoland lesbian under 30, yet irritated by King Princess’s holier-than-thou, smoke-deprived affect. Not only did she ask an adoring audience for their Juuls and joints throughout her set, but she also had the audacity to perform only three of the five songs from her sole EP out at the time, Make My Bed. She performed a lot of her newer tracks—most of which have since made it on to Cheap Queen, her debut album from October—but left her already devout fanbase unable to scream along to some of the precious few songs they knew by heart.

Only 20 years old then, King Princess (whose real name is Mikaela Straus) had Chicago’s lesbians wrapped around her finger.

This time this year, I left King Princess’s concert with a brand new irritant. Cringing at the way she tended to speak in between songs, I mentioned to a friend dancing next to me that King Princess seemed completely influenced by gay men’s culture—but to be fair, she’d always been like that. My friend Liva nodded, pointing out that it was “not just gay men, but specifically gay Black men…which is a little yikes.”

Between her random musings, self-promotions, and song introductions, the born-and-bred rich, white New Yorker fluctuated between vocal fry Valley Girl and drag-appropriative blaccent. It wasn’t a great look, though most of the audience didn’t seem to mind. 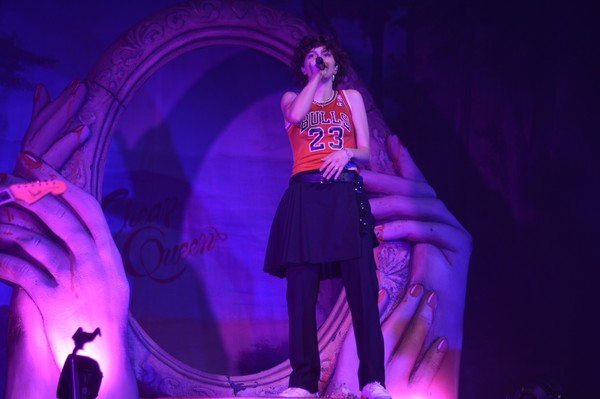 Now 21, King Princess performed for a sold-out Riviera Theatre last Wednesday as part of her Cheap Queen tour. She no longer needs to siphon Juuls off her audience; hitting some of her own between songs, King Princess occasionally tossed them out into a clamoring sea of hands when she decided she was done. Her new attitude toward Juul-sharing perhaps reflects a much-increased budget.

Whereas last year’s only decor was a cheap-looking “KING PRINCESS” sign in typical “HAPPY BIRTHDAY” fashion (which fell down halfway through the show), this year’s stage was decked out with a larger-than-life empty mirror held up by two massive, bloodied hands with red-polished nails. King Princess stepped through the mirror to a roaring crowd when she took the stage Wednesday night, and sauntered over to an electric blue piano to open the evening with “Isabel’s Moment,” a slower song off her new record.

For all the mixed feelings I have toward King Princess, standing in the press-only area that night, I was in heaven. As the other (professional) photographers leapt from side to side, joylessly capturing the up-and-coming indie pop icon from maximum angles, I couldn’t help but sing along, dancing and taking videos with my phone while I tried to teach myself concert photography on the spot.

I’ll be honest, I took my hair down and shook it out for volume when I learned I’d be standing feet away from King Princess, because even though hours earlier I’d told someone verbatim, “I wouldn’t date King Princess,” I didn’t want to write it off completely when given the chance.

A few songs in, once I’d returned to the masses and put away my camera, King Princess announced, “This is a tour for my album Cheap Queen. I think it’s a very good album. Very good…high scores. 10 points!” and I begrudgingly agree. Whereas Make My Bed brought us upbeat tempo, love songs, and New York City, Cheap Queen features a wider range of emotions and experiments more with instrumentals and electronic sounds. Cheap Queen seamlessly blends low-key songs that run deep (“Prophet,” “Ain’t Together”) with more popular crowd-pleasing bangers like “Hit the Back.” King Princess ended her set with the latter, and for the first time all night, the lights were all different colors and bouncing every which way. King Princess’s friend Henry (who’d lip-synced in drag earlier to warm up the crowd in between openers and the main act) joined her on stage again to dance, and the whole audience partied.

But nothing on Cheap Queen goes quite as hard as Make My Bed’s “Talia,” and I think King Princess knows that. She led up to the song with an uncharacteristically long conversation with the audience, first joking with us as she sipped from her red solo cup, asking, “Who’s completely wasted after four drinks? Who has four adult beverages and is sloshed, on the ground? That’s me.” The audience laughed, and then King Princess hit us with another question: “Who here has ever had an ex-girlfriend?” She asked the question provocatively a few more times, encouraging us to own it, before breaking out into the iconic first lines of “Talia,” which starts slow and gets progressively more passionate.

For the amount of fandom palpable in the room, it was a weirdly subdued crowd for dancing, but every voice in the room was on for the entirety of “Talia.” At lines like, “If I drink enough, I can see you dancing,” King Princess sipped more from her solo cup, happy to let the pre-recorded track do the moment’s singing for her.

An unexpected favorite song of the night, for me, was “Do You Wanna See Me Crying?,” a short number elongated onstage with interludes between false finishes. Its pitiful title doesn’t do justice to its self-reflective lyrics. I’d never paid them much attention before, but the words felt weighty in the moment, as she reflected on her success. Instead of bouncing across the stage, jokingly simulating sex with her bandmates (and sometimes the audience) as she was generally wont to do, King Princess stayed still for “Do You Wanna See Me Crying?,” singing in slow motion with her mouth pressed against the mic, framed by a strong beam of blue light.

King Princess’s final encore song takes its title from my favorite state in the Union, so maybe that’s why I liked it, but I think the range of intense energies surrounding “Ohio”—the only unreleased song she played the whole night—is what really made it stand out. She prefaced “Ohio” by pointing out her girlfriend in the crowd: Quinn Wilson, creative director for Lizzo, who was passing around a joint with King Princess’s high school friends. She chatted with all of them, telling them to stop distracting her, then launched into “Ohio,” sustaining eye contact with Wilson throughout the song’s loving parts. The audience watched them like tennis spectators—or at the very least, I did. Then King Princess went wild, and I’m 99 percent sure I saw the glint of a broken string flying around at the end of her electric bass—an appropriate end to the night, and especially to the song she most wanted us to know was rock.

I really don’t love King Princess as a person. I’m firmly back to my Wednesday afternoon position: “I wouldn’t date King Princess.” But she puts on a good show, and on behalf of Chicago’s lesbians, I think I have to thank her.