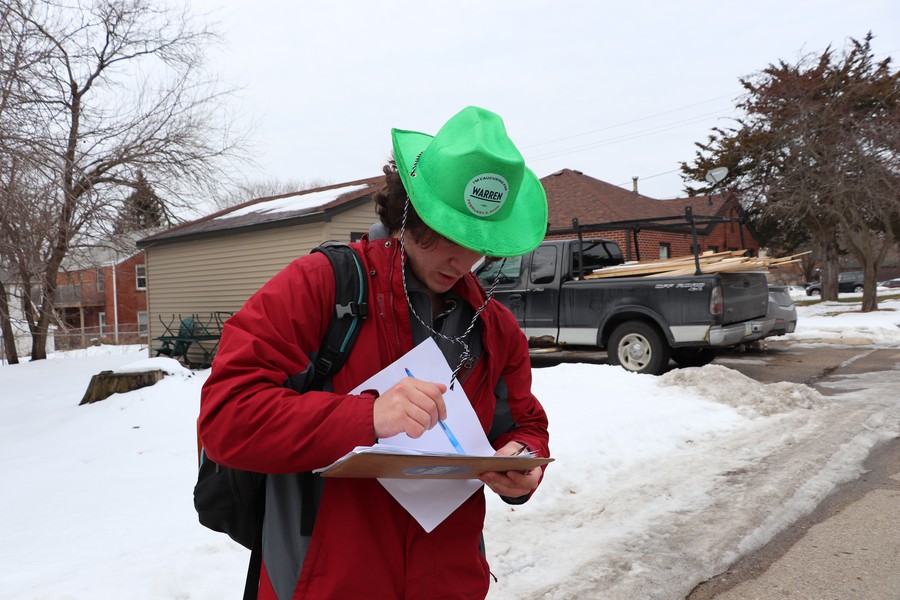 Sporting a neon green cowboy hat labeled with a “Warren” sticker, fourth-year Aidan Coffey was impossible to miss in the neighborhood of Waterbury in Des Moines.

It was well below freezing during Coffey’s third hour of canvassing for Elizabeth Warren, but he was stomping through snowbanks and jogging from house to house, offering an enthusiastic greeting to each voter he encountered.

This wasn’t Coffey’s first venture into community outreach. A political science major, Coffey worked as a field organizer for the outreach arm of the Missouri Democratic Party during the 2018 midterm elections, and he used to volunteer in Chicago doing tax assistance to low-income residents of Bronzeville.

But Coffey views his trip to Iowa with a unique sense of purpose: to speak up during a decisive moment in American politics.

“If I want to be content for the next four years, I personally would like to make my voice heard,” he said.

Coffey had been knocking on doors and volunteering for the Warren campaign since the Friday before caucuses. He was motivated to make the trip to Iowa because he perceived how rare the opportunity was to be present for a crucial moment in American politics.

“This is it. We don’t get this chance all the time,” he said. “This is a four-year choice.”

Coffey has been supporting Warren since the summer of 2018, when he was drawn to the Senator’s intellectualism and detailed policy plans, which he believes reveal her preparedness for the highest office in the country.

“She’s just got very nuanced policy, as a former Harvard professor and eight-year Senator…that I, as a college student majoring in political science, am particularly keenly interested in. She’s very competent and capable of handling a massively challenging position,” Coffey said.

Coffey views Warren as uniquely prepared to accomplish progressive goals due to her ability to reach bipartisan solutions, praising her for not being “rigidly ideological.”

“I’d like to see a president make huge change to our country, and I think she’s extraordinarily prepared [to do so], more so than other candidates.… Senator Warren, in unique contrast to Senator Sanders, for example, has shown an ability to work across the aisle, to find solutions, and be able to work with other people who aren’t necessarily on her side,” Coffey said.

Coffey believes that corruption and campaign finance, two issues which the Massachusetts senator has placed at the center of her campaign, have a tremendous effect on him and other Americans.

“The influence of lobbying in the United States often controls policies that affect every single American,” he said. “A multitude of issues that I care about…are bogged down by the influence of huge donors and big money in politics.”

“That sort of quick tension leading to potential escalation is personally devastating for me,” Coffey said. “The president of the United States openly publishing through his social media that he’d be interested in bombing Iranian cultural sites just hurts me deeply.”

He views the election as an opportunity to reshape American foreign policy in Iran.

“The president deciding to think so shortsightedly…is one of the things that I deeply want to change about the next administration,” Coffey said. “I know that Senator Warren, through her eight years in the United States Senate, would like to scale back the American military decisions that President Trump and other presidents in the past have ensnared the United States in.”

Coffey was impressed by Iowans’ openness to considering many candidates and the seriousness with which they take their role as the first state in the primaries.

“People are interested in having conversations up until the last day, the last weekend,” Coffey said.

He also said that canvassing has helped him better understand the situation on the ground in Iowa: “It’s just so exciting to hear people’s minds and feel like you’re better informed about how this might go.”

At the end of the day, Coffey was in Iowa out of a deep-seated aspiration simply “to be part of the American political system”: a feeling that is amplified by the singularity of this political moment.

“I deeply enjoy thinking about American politics, and it’s just exciting to observe and be a part of it. Because, again, this is it.”