Emmons approaches virtually every issue, from environmental pollution to education, with nuance and consideration of all aspects of the problem. 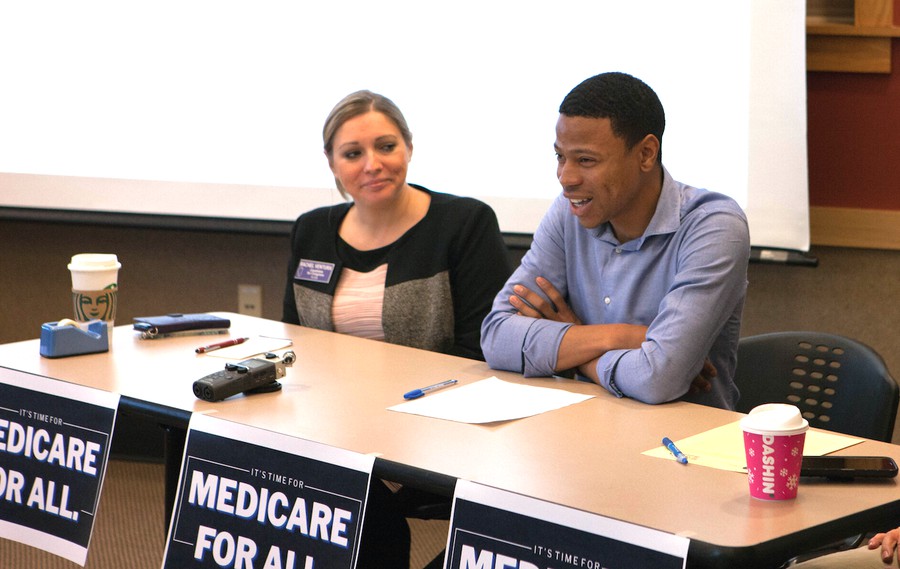 When Bobby Rush won his first campaign to represent Illinois’s first district in 1992, voters could be confident they were electing a progressive to Congress. Rush cofounded the Illinois chapter of the Black Panther Party and served as the party’s acting chairman after the assassination of Fred Hampton. Rush’s work in the civil rights movement is admirable, and his legacy as an activist is impressive, but after he’s spent 27 years in the House of Representatives, it’s hard to argue that Rush remains a progressive candidate. A million-dollar grant awarded by AT&T to a nonprofit founded by Rush for a “technology center” in Englewood has vanished. Rush, who has taken over $540,000 from oil, gas, and utility companies over his career, has also referred to the Green New Deal as a “smash and grab.”

His recent endorsements have been the final straw: Rush backed Bill Daley, who advocated for massive aerial drone surveillance programs on the South and West Sides, for mayor in 2019. For president, Rush’s choice is former New York mayor Michael Bloomberg, a longtime advocate of the racially discriminatory stop-and-frisk policing practice.

Rush’s past activism should be applauded, but in light of this missing money and his recent regressive stances, we cannot endorse his reelection. Fortunately, one of his challengers stands out as uniquely qualified, engaged, and authentic: gun violence prevention leader Robert Emmons, Jr., who is running to become the only Black representative under the age of 35.

In a wide-ranging conversation with The Maroon’s Editorial Board, Emmons laid out a meticulous vision for the district. When asked about environmental issues, for example, Emmons touted his support for the Green New Deal and endorsements from the national and local Sunrise Movements, but he also took care to relate the issue back to the district. In particular, he discussed the possibility of wind farms in the rural southern end of the district, as well as the need to reduce the district’s asthma levels, currently among the highest in the country.

Listen to the Editorial Board's interview with Emmons:

This interview is also available on Spotify.

When we asked about federal investments in transportation, Emmons had an answer ready, saying he sees a role for the federal government in helping small cities that cannot afford to undertake major transportation projects. He spoke specifically about how a lack of transportation in Frankfort Township, Will County, has caused population loss as young people move closer to Chicago. When we asked about unionization, Emmons had another answer rooted in local concerns: He wants to repeal right-to-work laws and promote the unionization of charter schools, a position informed by his experience walking picket lines during both the Chicago Teachers Union strike and the nurses strike at UChicago Medicine.

Emmons approached every question with nuance, recognizing the various aspects of each issue. Take environmental pollution, for instance. Emmons is concerned about plastic pollution in Lake Michigan but is also aware of the potentially regressive economic impact of plastic bag taxes. On education, Emmons wants public school funding systems to reduce their reliance on property tax revenues that cause schools in poor communities to be underfunded, and he proposes a creative solution: using federal dollars as a carrot to encourage states and municipalities to reform their funding models.

Beyond his progressive platform, Emmons has also been effective in building community support for his agenda. In addition to the support of Sunrise Chicago and the national Sunrise Movement, he’s secured the backing of the 15th Ward Independent Political Organization, Will County Progressives, and Southwest Suburban Activists. These organizations span the entire length of the district, from Brighton Park to rural Will County, showing Emmons’s ability to build the kind of broad-based coalition he needs to defeat Rush.

Emmons is not the only challenger running against Rush. Sarah Gad, a third-year student at the Law School, has a compelling life story, and in our conversation with her she articulated a clear-eyed vision on criminal justice reform, drug policy, and mental healthcare. Gad would be an improvement over Rush, but we see Emmons as the best candidate because of the detail and impressive sweep of his platform. We look forward to seeing Gad continue to contribute to the public debate on criminal justice issues; her personal experience and thoughtful platform makes her an important voice in these conversations.

Illinois’s first district has a long and storied past. Its next representative will inherit a seat once occupied by Oscar DePriest, the first Black representative from the North, and Harold Washington, who left the seat to become Chicago’s first Black mayor. Rush stands among these historic figures, but after nearly three decades in office, it’s time for a change.

The Maroon believes the best choice to replace our 27-year incumbent is his 27-year-old challenger. We endorse Robert Emmons, Jr., for the U.S. House of Representatives.