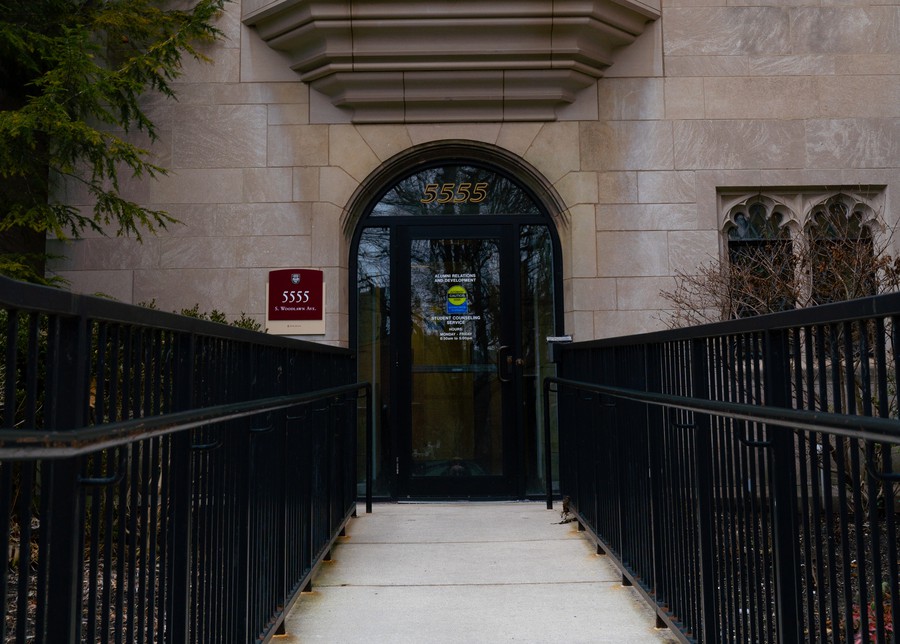 Faced with rising demand for mental health services, the University has relied more heavily on outside referrals, increasingly directing students to off-campus therapists and health-care providers, minutes of the faculty senate from 2018 recently obtained by The Maroon show.

“Lately, it has been necessary to increase the percentage of students being referred out, in order to maintain equilibrium,” Albert told attendees of the meeting, which included University administrators such as President Robert Zimmer.

The statistics offer a glimpse into how the branch of the University tasked with providing mental health care to students is responding to evolving student demands on campus.

At the same time, referrals by SCS to off-campus providers have increased as well. “One effect of increased demand is a substantial year-to-year increase in referrals to outside providers,” Albert said at the meeting. The percentage of students being referred out at intake increased from 26 percent in 2016 to 38 percent in 2017, he said.

The University declined to provide more recent referral rates. Spokesperson Jeremy Manier said, “The University does not release year-to-year figures for the SCS referral rate, which can fluctuate in ways that do not reliably inform administrative planning.”

At the faculty senate meeting, Albert attributed the jump in outside referrals to SCS’s decision to not have a waitlist, despite increased demand for counseling services.

If SCS wanted to continue not having a waitlist, Albert said, “this will become more difficult unless the supply keeps pace, particularly in an environment of rising demand.”

Albert also noted that individual psychotherapy sessions offered in-house have reduced. “Several years ago, SCS was able to offer students eight to 10 treatment sessions, but this has declined to six to eight sessions,” he said.

Assistant Vice President for Student Services Mario Polizzi, who consulted with Albert before the 2018 meeting, told The Maroon in a recent interview that these numbers on treatment sessions represented the average number of sessions for students during a single treatment. Polizzi said that SCS does not cap the number of sessions a student may receive from SCS and that students may go through stints of in-house sessions multiple times throughout their time at UChicago.

Kumar told The Maroon in the same interview that she believes that statistics around referral rates should be viewed in the context of changing needs of students.

“We are seeing a greater need for more long-term care,” Kumar said. Students across the country are coming into college having already identified chronic mental health conditions, and more students have had experience with therapy prior to college, she said, and this means more students go to SCS seeking long-term care from external providers.

Other methods Student Counseling is pursuing

In response to one professor’s concerns about the increasing anxieties felt by students and barriers to seeking mental health treatment, Albert suggested that hiring a case manager—a staff member to help students navigate the referral process—could help “mitigate some of the risk associated with referrals.”

In the 2018–19 school year, SCS hired two professional case managers who are also licensed clinical social workers. Case managers assist students by connecting them to providers that accept their insurance and will call insurance companies with students to help break down costs.

Kumar told The Maroon that hiring case managers has allowed SCS to expedite the referral process for students who are looking for long-term care.

In addition to case managers, SCS has added new positions including three clinical psychologists, one associate director for diversity and inclusion, one psychiatric nurse, a postdoctoral psychology trainee, and one administrative staffer. The associate director for diversity and inclusion is also a psychologist who will spend time doing therapy and the psychiatric nurse will provide medication management by supporting and monitoring students as they are prescribed new medications.

Albert also stressed efforts to increase usage of SCS. He said that although around 45 percent of students indicate that they would like to make use of student counseling, only about half that number make use of SCS offerings. He attributed the gap, in part, to the “major and intractable problem” of students’ choice to live off campus, where isolation can exacerbate existing issues. Living off campus, he said, “renders students far less visible.”

In the six months since she became director, Kumar has taken steps to address some of the most prominent student complaints, including wait times, accessibility, and increased staff. In the past two years, SCS has responded to student concerns by hiring staff, opening two new programs—Let’s Talk and the Academic Skill Assessment Program—and initiating a pilot program for appointment scheduling that is designed to reduce wait times.

Students often express dissatisfaction with the wait times for individual appointments in SCS. Under Kumar, the department has put an increased focus on shortening wait times, and in response has begun a pilot program for appointment scheduling that leaves open next-day appointment availability.

SCS has also introduced a 24/7 call line through which students can speak with a mental health clinician. The call line has not been widely advertised, but Kumar said SCS is trying to make students aware of the new service. “Students are on kind of a different time cycle, and now at 2 a.m. in the morning, in case they wish to reach someone, there is someone at the other end of the call,” she said.

The new Health and Wellness Center, set to open in the fall, is also central to SCS’s efforts to provide more care to students. The center has received a mixed response from students. Some feel it is merely a symbolic gesture that does not address the stress culture at the root of mental health concerns on campus.

In response to these complaints, Polizzi told The Maroon that he finds it discouraging when students build a narrative that the center is unhelpful.

“I don’t want to minimize anyone who’s expressing feelings that they might be struggling, and they have concerns,” Polizzi said. He noted that the wellness center will expand resources and lower the barrier for students to walk in the door and receive clinical and nonclinical care.

Polizzi continued, “[but] if there is a narrative where students are saying, ‘Well, that’s a token thing that doesn’t really help,’ that kind of pains me because if that’s out there and students are discouraged from seeking help, that’s unfortunate.”

The discussion of Student Counseling Services by the faculty senate can be read below.