A combination of poetry reading, dance recital, and blues jam session all rolled into one, young’s performance was decidedly unlike anything else seen at the Co-op before. 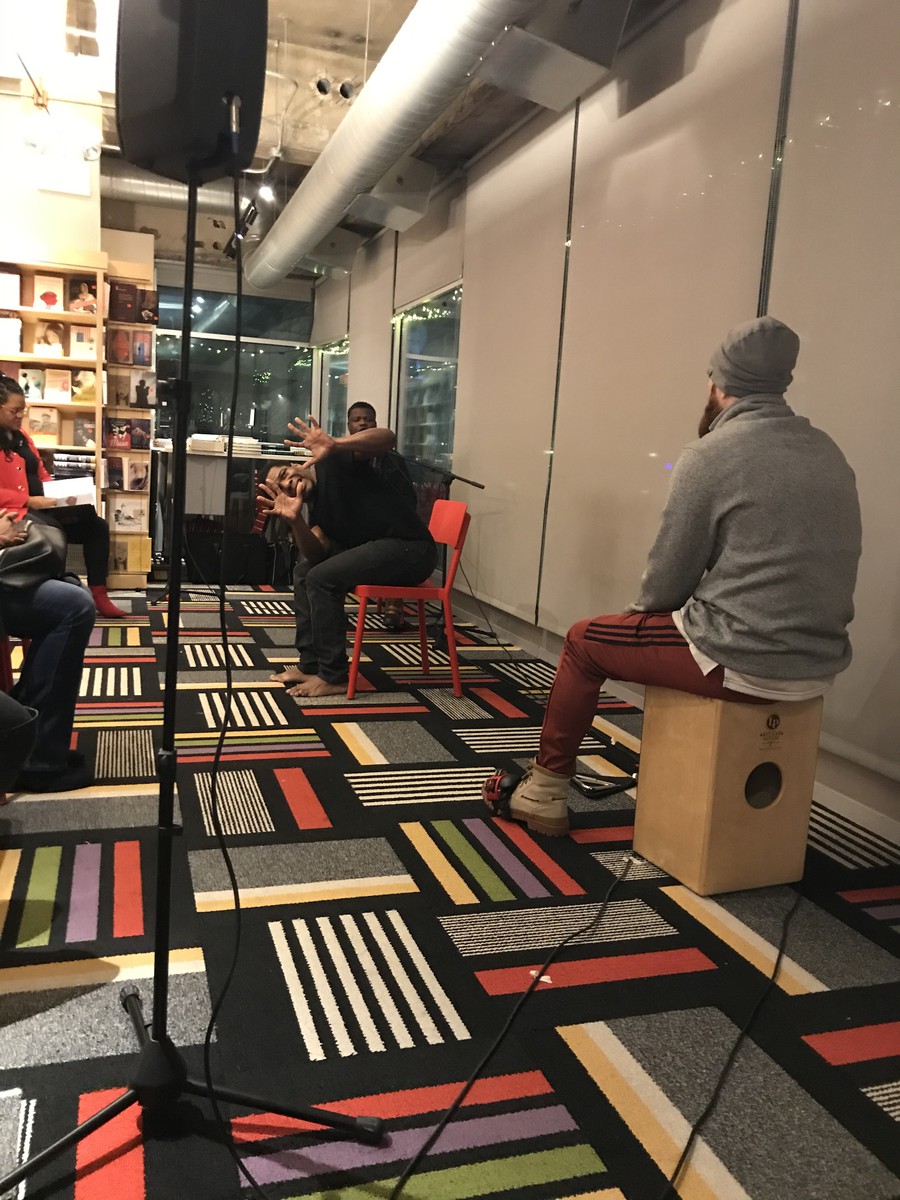 Last Wednesday, the Center for the Study of Race, Politics, and Culture (CSRPC) sponsored a reading and discussion with Chicago-based interdisciplinary artist avery r. young at the Seminary Co-op. Accompanied by a small supporting crew and a highly contagious brand of humor, young delivered an electric reading before engaging the Co-op audience in a compelling discussion about writing and performing contemporary Black America.

Anyone familiar with neckbone, young’s latest poetry collection, would probably have been curious to see how he would have done a reading of it. Indeed, it would be remiss to call neckbone a poetry collection—part visual collage, part artistic manifesto, the book resists any categorization in a singular genre and speaks to the multidisciplinary dynamism of contemporary black (or “blk,” in young’s terms) experience. It is precisely this dynamism that young’s reading sought to replicate. A combination of poetry reading, dance recital, and blues jam session all rolled into one, young’s performance was decidedly unlike anything previously  seen in the Co-op. young’s delivery bristled with charisma—at times, he would spit out his lines with agitated fury, and at others, he would close his book altogether, swaying and snapping on his chair while he sung his lines in blues-tinged melancholy.

young’s intense energy was complemented by his supporting crew. The performance of dancer Drew Coleman deserves special mention, as he brought young’s words to ferocious life. Occupying center stage for much of the reading while young sat on a chair in the wings, Coleman’s performance was characterized by moments of great tautness punctuated by explosions of sudden movement. Coleman’s choreography was greatly political and poignant—one moment, he would mime the conditions of a stowaway slave in the holds of a ship, before switching effortlessly into a tableau of Eric Garner’s infamous death by choke hold at the hands of the NYPD. To young and Coleman, these two acts of violence, no matter how distant, are not unrelated, and speak to a historical continuity of violence inscribed onto black bodies by institutions of power. As young himself read throughout this particular performance: “there was a beginning before the gun.” As Coleman leapt onto a chair in the front row of the audience and pressed himself against the Co-op’s back window, the distance between young’s heavy message and the audience collapsed entirely. The credulity of this truth began to cut too close for comfort.

It is precisely this discomfort that young sought to encapsulate in neckbone. “Much of the book is really, really heavy,” he reiterated during the Q&A held after the reading. To young, that territory comes naturally with writing a book that tries to identify and represent the contemporary black moment, and to celebrate the myriad adjectives that come with this experience—painful or otherwise. Reflecting on the writing process for neckbone, young recounted the moment when he realized that his 32-poem opus on the contemporary black experience was in fact a collection of poems about his own experience growing up on Chicago’s West Side. In a sense, the two narratives are necessarily inextricable—it is only through the prism of personal experience, such as the death of his baby cousin or Sunday afternoons spent in church basements, that young can properly come to terms with the black condition that could only have been written by him.

Despite the heavy subject matter he addresses, young relishes nonetheless in triumphantly encoding the black experience on his own terms. In every sense of his craft, from his text to his performance, young resists ordinary convention, seeking instead to enshrine his code within a space of black exceptionalism. Indeed, in neckbone, words obey distinct grammatical rules and are often interspersed with images as opposed to being objectified in plain text—in young’s words, “black folk don’t communicate from left to right.” Crucially, while young delineates the black vernacular as a distinct entity, he does not imply its inferiority to other, “standard” uses of the language. Again, young makes use of his personal experiences, drawing from his childhood, growing up in what he calls a “family of polyglots”—he would observe a sense of heterogeneity from the same person employing different idioms of speech while reciting the Lord’s prayer, or while serving fried chicken after service in the church basement.

Not that young feels in any way obligated to be the reader’s cipher of the black experience. It is, after all, the “blk” experience—one that needs no permission to express itself, or to make itself understood. As young remarks laughingly, “People will figure it out, or they won’t.”