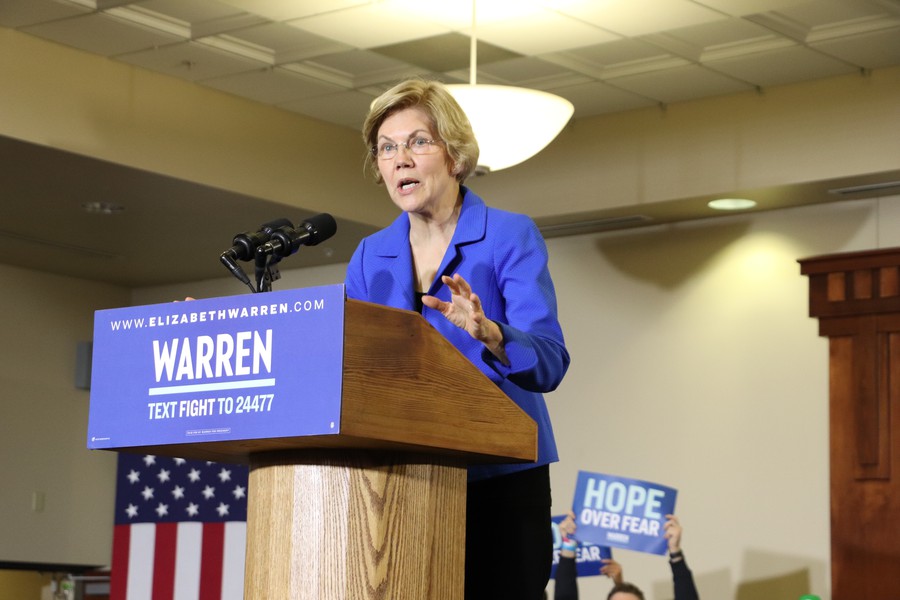 Senator Elizabeth Warren address the crowd at her Des Moines rally on the night of the 2020 Iowa Caucuses.

Poll after poll has found that Democratic voters’ top priority when picking a nominee is based on who they believe can beat Donald Trump, rather than who they most agree with on the issues. “Electability” is on voters’ minds, and it’s a question that many candidates have faced on the campaign trail.

But to Linda Zerilli, professor of political science and gender and sexuality studies, the conversation surrounding electability is divorced from a necessary discussion of gender in politics.

In an interview with The Maroon about Elizabeth Warren’s candidacy, Zerilli said that questions of gender have been absent from all of the candidates’ central platforms.

“You cannot siphon off the electability question in terms of gender from a broader discussion of gender in the campaign,” Zerilli said. “[The 2020 candidates] are not thematizing gender, and gendered inequality, and toxic masculinity.”

Despite the fact that the gender or race of women candidates or candidates of color could be assets to their campaign, Zerilli said, discussion of these issues is incidental to most candidates’ approaches.

Rather, Zerilli said, “You see a lot of these women candidates dipping their toes in the water every now and then and saying, ‘Well, I’m a woman and that would be a good thing,’ but for the most part they’re fearful of actually using their gender as part of their platform.”

“There’s a lot of research that shows that [women in Congress] have done a lot of things that are really good, generally speaking, from the perspective of the Democratic Party,” Zerilli said, adding that “there’s actually something about the specificity of their experience as people of color, or as women, that they could use as a way of gaining critical leverage on the problems that we face as a society. [Candidates] could say that straightforwardly, but they don’t.”

Zerilli said that the reason for this silence is an implicit recognition that, by virtue of being women, female candidates differ from voters’ ideas of a standard candidate.

“White masculinity is the unspoken norm,” Zerilli said. “The standard is not generic: it’s raced, classed, and gendered, but nobody really talks about that. I think that there’s a real fear of being seen as a woman.”

As evidence of the fact that candidates have not “thematized” gender, Zerilli pointed to the candidates’ criticism of Trump during presidential debates.

“A lot of terrible things are said about Trump on that debate stage,” she said, “but not that much really goes at the question of this form of toxic masculinity that he represents.”

Despite the wide range of explanations on why Warren’s campaign has had trouble in Iowa and New Hampshire, Zerilli does see the campaign’s decline as linked to Warren’s gender. The criticism Warren faced earlier in the race regarding her “waffling” over the issue of Medicare for All revealed to Zerilli a double standard between Warren and fellow progressive candidate Bernie Sanders.

“Bernie Sanders isn’t being straightforward about [Medicare for All] either, but it’s not penalizing him,” Zerilli said. “Warren was held to a certain standard of financial fiscal accountability that Sanders was never held to. Why is that?”

Many have said that it is logical to hold Warren to a higher standard of explanation, as she pitched herself as a technocrat with thorough, policy-driven answers. However, Zerilli said that gender undergirds even this aspect of her candidacy.

Zerilli views this as not just specific to Warren and Sanders, but as a general problem facing all women candidates.

“[Women candidates] have always had to have very detailed accounts of ‘How are you going to pay for this?’ ” Zerilli said. “If you’re a man, you’re not called upon to give that kind of detail.”

But to Zerilli, the existence of a gender-based double standard is no coincidence; the higher expectations for women candidates to explain their policies speaks to a broader lack of trust in women’s competency.

“The demand for a very detailed accounting,” she said, “really goes to the question of ‘Are you really competent? Prove you’re competent.’ ”

A Daily Beast/Ipsos poll conducted in June of 2019 found that while 74 percent of respondents claimed they were personally comfortable with a female president, only 33 percent believed their neighbors would be comfortable with a woman in the Oval Office.

To Zerilli, the poll reflects the nature of structures of inequality. They can be held in place not through “open declaration,” but through “disguised, unconscious bias.” The assumption that neighbors hold sexist beliefs “are really a projection of one’s own thoughts about a woman as a competent national leader.”

“We’re now in a time when it’s so impossible to come out with a straightforward sexist statement like ‘A woman could never be a good president.’ All of those feelings of sexism, racism, et cetera, are all forced to become like a coded language.”

Zerilli advised voters who are mindful of electability to be wary of double standards between men and women candidates, and to probe discussions of electability for the subtle influences of categories such as race and gender.

“We always circle back to a gendered thematic,” she said. “That’s not to say that gender explains everything here; it doesn’t. But I always find myself very distressed at how under-thematized it really is in this campaign.”