"Wages of Work" Goes Beyond Depiction 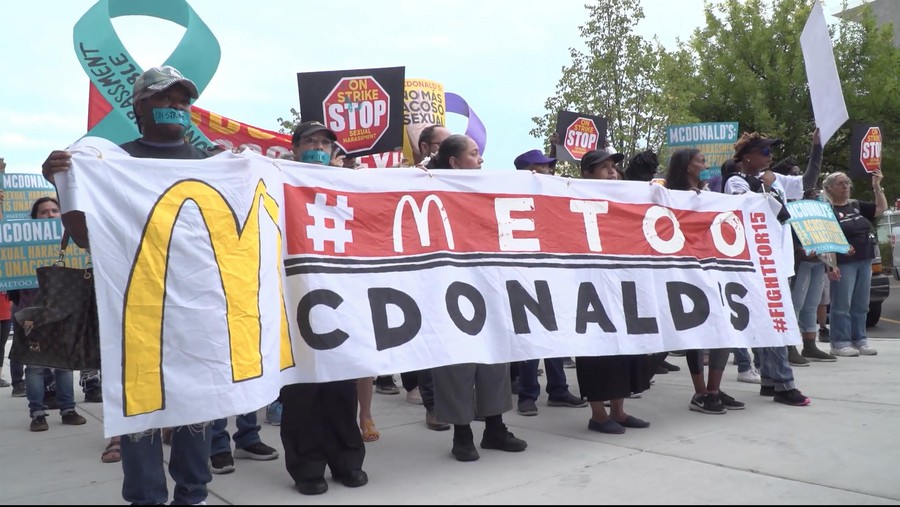 Wages of Work, the fourth event in the We Tell project, is a collection of four films focusing on labor issues, especially as they intersect with race, class, citizenship, gender, and the environment. Presented by the Film Studies Center, Arts + Public Life, and the Center for the Study of Race, Politics, and Culture, and co-programmed by Louis Massiah of the Scribe Video Center and Patricia Zimmermann of Ithaca College, this project focuses on creating a network of exhibitions for community media projects that delve into social issues generally not viewed outside of academic or activist contexts.

Finally Got the News (1970), by far the longest film in the collection, examines the Black revolutionary labor movement in the Detroit auto industry. Clocking in at nearly an hour, the film begins with a montage of historical images set to a polyrhythmic drum piece, drawing stylistic parallels with early Soviet montage and poetic documentary. This referential revolutionary form complements the film’s content: stories of race and class struggle, extended interviews with Black revolutionaries describing their political strategy, and powerful sequences of the hazardous work within the factory.

The film addresses the experiences of Dodge Revolutionary Union Movement (DRUM) members in their attempt to receive concessions from both corporate management and the United Automobile Workers (UAW), the union that was supposed to represent them. Throughout, rank-and-file Black workers clash with union management, who appear more interested in maintaining their own power than representing the needs of the workers. With fraudulent elections and police intimidation, the UAW attempts to silence a growing resistance to their monopoly on worker representation. While DRUM explicitly positions itself as organizing as part of the Black liberation movement, the plight of white workers is addressed as well. Through a series of interviews with white workers, the film argues that if white workers organize themselves in solidarity with the Black revolutionary movement—instead of blaming Black workers for their own condition—working conditions will improve for all.

Finally Got the News is notable not only for the quality and impact of the film itself, but also for the process of its creation. Shooting an almost feature-length film on 16mm was not a cheap project in 1970. After the showing, Zimmermann commented on the curious inclusion of “Marijuana” as a producer in the credit sequence. She noted that the film was funded in part by marijuana sales, drawing a connection between the heavy criminalization of marijuana and other drugs and the state repression of revolutionary and countercultural political groups, particularly those focused on minority liberation.

The United Mine Workers of America 1970: A House Divided (1971) was produced by Appalshop, a Kentucky-based production company that formed as a byproduct of the U.S. government’s war on poverty. The film intercuts interviews with disabled mine workers, who advocate for a democratic union, with a speech given by Tony Boyle, president of the United Mine Workers of America. Boyle, who was suspected of murdering the family of an outspoken union advocate, represents the hypocrisy and self-serving nature of corporatized unions in his argument against democratic reform.

The themes of A House Divided are similar to that of Finally Got the News—worker struggle, conflict between union management and rank and file, among others. But A House Divided is especially notable for being an example of community media from an area of the country not typically associated with that form of production. Zimmermann commented on the filmmaker’s desire to push against prevailing stereotypes about the rural Appalachian working class that were being solidified by popular media at the time, such as The Beverly Hillbillies. Contrary to prevailing documentary practices, Appalshop refused to subtitle so-called “nonstandard” forms of English. This makes for a political statement not only about the validity of linguistic diversity, but about the subtle ways in which documentarians exert their own perspectives into their films.

Los Trabajadores (2002), produced by El Comité de Apoyo a los Trabajadores Agrícolas (CATA, translating to “the Committee for the Support of Agricultural Workers”), tells a uniquely successful story about mushroom farm laborers in rural Pennsylvania. The vast majority of such laborers are migrants from Latin America, and the film shows the extra level of exploitation against workers who have little means of recourse against violations of their labor rights. Faced with poor wages, backbreaking work, and daily exposure to harmful pesticides, the workers decide to go organize a strike. After holding out for months, the workers manage to form an official union and have their demands recognized. Over only 20 minutes, Los Trabajadores illuminates the interconnectedness of labor, immigration, and environmental racism.

I’m NOT on the Menu (2018) places the #MeToo movement in a classicized, racialized context. Produced by Labor Beat and filmed by Andrew Friend, who took part in the Wages of Work discussion panel, the film follows a walkout staged by fast food workers in protest of sexual harassment at work. A part of the Fight For $15 campaign, the Chicago workers march on McDonald’s corporate headquarters and share their stories of abuse at the hands of managers and fellow employees. McDonald’s argued that the issue was a matter of franchisees, but workers’ resistance to the widespread pattern of harassment forced the megacorporation to adopt new policies for addressing sexual harassment cases.

After the showing, Salomé Skvirsky, associate professor in the Department of Cinema and Media Studies, moderated a discussion about the films with Zimmermann and Friend. They began their discussion with the question of how these particular films were selected and why they were presented in this fashion. Zimmermann raised issue with the term “curation,” instead suggesting that she and Massiah were programmers who are “not making effete aesthetic decisions” and were instead “following the pulse of major unresolved issues and being the medium through which these issues can get out.”

Friend then problematized the notion that journalists and documentarians are supposed to be impartial creators of content. From a pragmatic perspective, he said, it is impossible for media creators to be completely impartial because of how many individual decisions involved in the documentary process. Every shot, every edit, and every person not interviewed, shape a particular understanding of the documentary event. Instead, Friend argued, filmmakers should be conscious of their own position and use their forum to empower underserved perspectives. Friend also came at the issue from a class perspective, stressing that due to the existing state of the media industry and contemporary class relations, critical journalism will necessarily amplify the working class. “We don’t need to ask about the perspective of the McDonald’s owner; Channel 7, Channel 9, and everyone else are already talking to them.”

The documentaries in Wages of Work manage to artfully depict the experiences of working people without falling into generic trappings of social realism. But, as much as one can highlight the artistic qualities of these films as objects, their functionality exists beyond aesthetics. Originally intended to be shown to activists as a means to foment political motivation, “this kind of work is not about creating an object, it is about bringing people together to initiate dialogues and debates,” Zimmermann stated. “The goal of this work is to dismantle the power in America that would take our own power…. This is American history that’s urgent and necessary.”

In the original article, it is stated that Patricia Zimmermann of Ithaca College commented that the film "Finally Got The News" was funded in part by marijuana sales. Peter Gessner, director of the film, has asserted that this was not the case at all.

The original article suggested that the film "Finally Got The News" was produced by the League of Revolutionary Black Workers. After consultation with Peter Gessner, one of the directors of the film, we would like to clarify that although the League was instrumental in influencing the development and structure of the film, it was not directly involved in its making.