Candidates for Illinois' 13th Senate District clashed at a candidate forum ahead of the Democratic Primary. 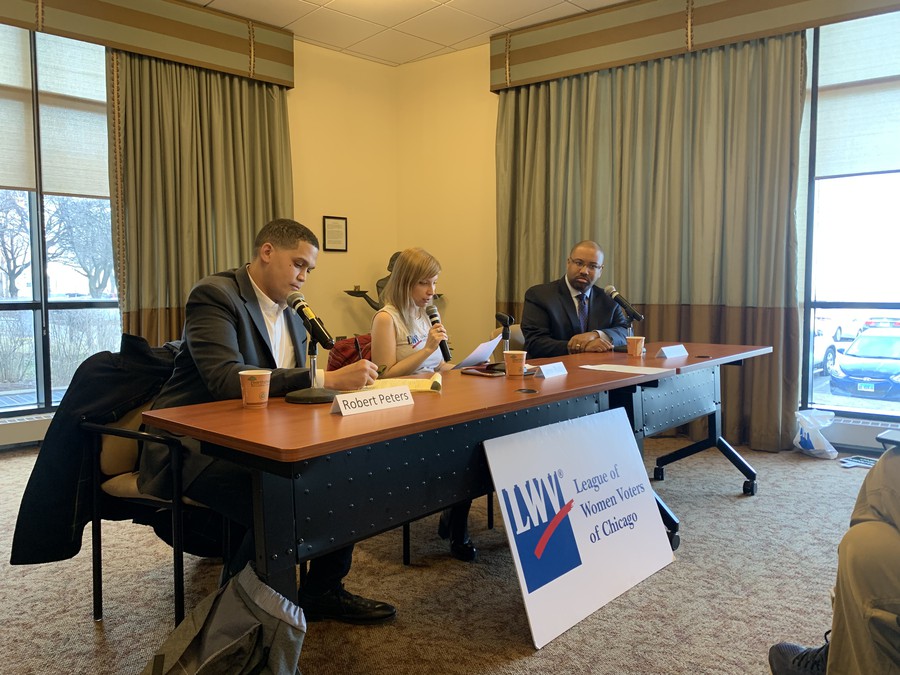 Incumbent Sen. Robert Peters and challenger Ken Thomas participated in a candidate forum for the 13th District of Illinois Senate hosted by the League of Women Voters-Chicago.

Incumbent Senator Robert Peters boasted about his legislative record and endorsements, while his challenger in the Illinois State Senate 13th District Democratic Primary, Ken Thomas, criticized Peters as a part of the overall political corruption of Illinois at a candidate forum on Saturday.

The forum, hosted by the League of Women Voters (LWV) of Chicago, prompted candidates to answer questions from the LWV and audience members about the proposed Illinois Fair Tax amendment, criminal justice reform, the pension crisis, the state’s fiscal health, and other state issues.

In his opening remarks, Peters spoke about his personal background and legislative actions since being appointed to his office last year, a process that he said “made me feel I had to earn this seat, and so I passed 13 bills: more than any freshman legislator in Springfield.” He also pointed to his role as the state senate Public Safety Committee chairperson and spoke to a need for continued change.

“The last 30 years was an era of mass disinvestment and loneliness. The next 30 years is where we can reimagine safety and justice in our communities,” Peters said.

In his own opening remarks, Thomas, a lawyer by trade, also urged positive change and strong values in what he called a broken political system. He went on to call Peters’ appointment “a backroom deal” that is a part of larger political corruption in the state.

Thomas also pressed Peters for taking corporate money in his campaign when an audience member asked about big dollar donations. “I am not bought,” Peters said in response. “I promise you that I am going to push to make sure that they pay their fair share and that they’re held accountable.”

In response, Thomas said, “That’s what all the politicians say…the fact that Senator Peters has taken so much corporate money—thousands of dollars—is bad for our system and it evidences a broken system that ought to be changed.”

In terms of policy, audience members such as Lillie Sanders, a resident of Hyde Park for nearly 30 years, noticed the two candidate’s similar positions on some issues, such as their support of the Illinois Fair Tax amendment, the need for a state constitutional amendment to end gerrymandering, and lifting the state ban on rent control.

Sanders was impressed with the knowledge of both candidates. “They do have a grasp of the issues. They may, on some issues, just come at it differently, but that’s politics,” she said.

The two candidates notably diverged on policy concerning the taxation of retirement income.

Thomas pointed to the state’s fiscal problems and need for additional revenue sources as reasons to tax the state’s wealthiest retirees. “We should have a progressive retirement tax.… The state’s in trouble, we need additional revenue, so if you’re one of the wealthiest retirees in the state, then we ought to get a little bit of that if you are bringing in a million dollars a year or more in retirement income,” he said.

Peters disagreed, saying that taxing retirement income would distract from other problems with tax revenue.

“We open up Pandora’s box by taxing retirement income,” Peters said, “and instead of focusing on the progressive income tax or closing corporate tax loopholes, they start reducing it one by one until we all can get hurt by having a tax on retirement income.”

Sanders told The Maroon that she was overall pleased to see an event on a state election and stressed the importance of upcoming state and local elections.

“In this climate of hate and division, I think if we’re going to make any change in the [political] establishment, it has to start from the grassroots level, so our state senators and state representatives are crucial to representing us, the people,” Sanders said.

According to Mardikes, the LWV of Chicago will be hosting candidate forums around the city leading up to Illinois’ March 17 primary. She highlighted the Illinois Voter Guide created by the organization, meant to assist voters in researching candidates and issues before they get to the ballot box.