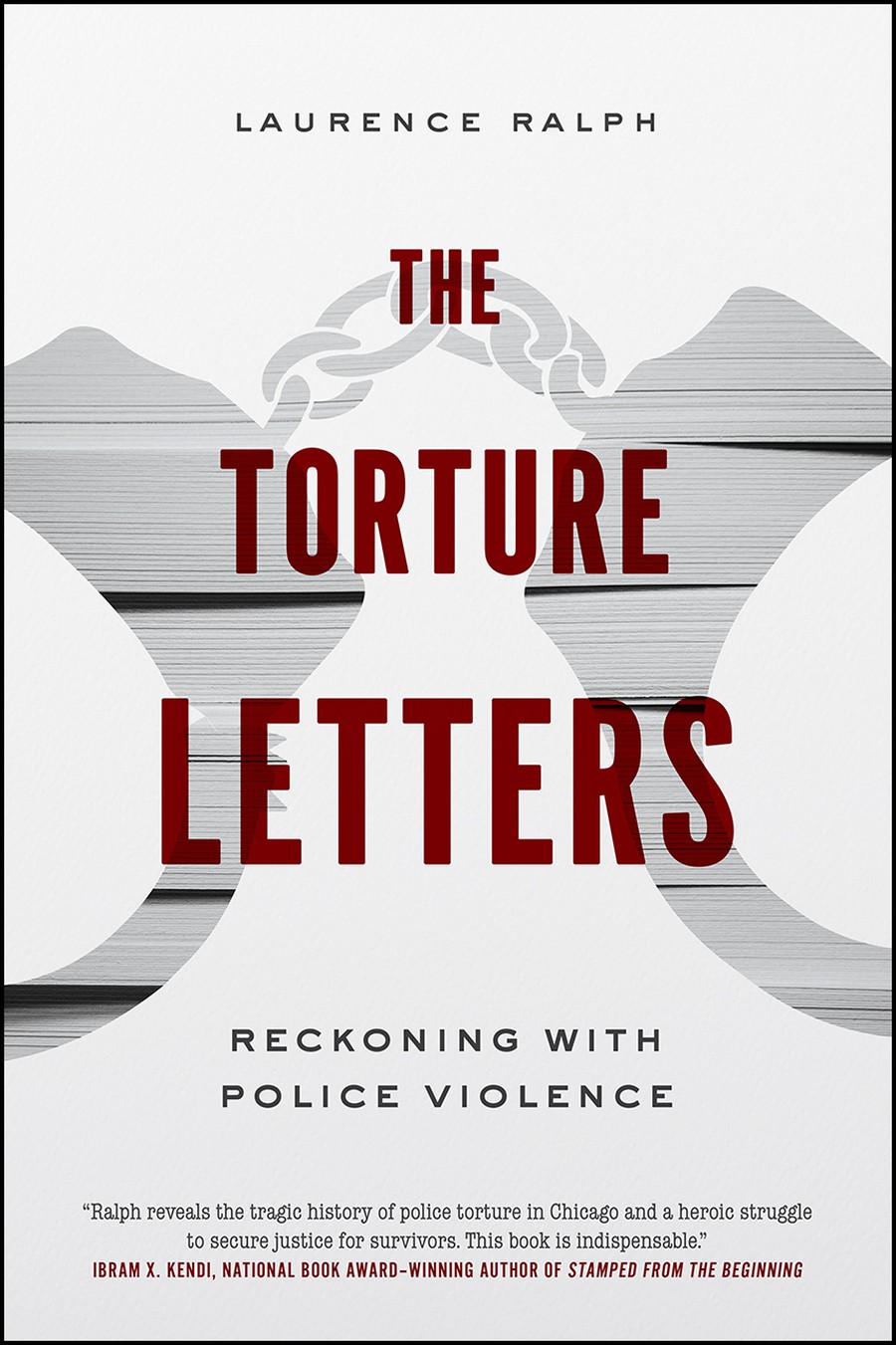 Courtesy of University of Chicago Press

In Princeton University anthropology professor Laurence Ralph’s new book, he poses the question: “Is torture...justified when the criminal actually did commit the crime?”

Through a series of open letters addressed to victims of police torture, targets for racial profiling, public figures, activists, future mayors of Chicago, and the reader, Ralph traces the history of racism and police violence in Chicago through government institutions and back to its roots.

The book is the product of over a decade of research and interviews with Chicago residents, culminating in a comprehensive and thought-provoking account of the “horrific” effect of past and present police torture on the future of Chicago and its residents.

Moving to Chicago for graduate school brought Ralph into direct contact with police abuses for the first time. Just two weeks after moving to the city, Ralph witnessed a group of police officers stopping and emptying the backpacks of two teenagers on the corner of Lawndale Avenue and Cermak Road.

“I was afraid that I was witnessing an altercation with the police that I, too, might eventually have,” he wrote in The Torture Letters. “At the same time I was afraid because I was seeing the past.”

Ralph, who is Black, explained in an interview with The Maroon that, growing up in Baltimore and Atlanta, his elders would give him lessons to avoid police racial profiling. Ralph said, “Even older people who I didn’t know would sometimes say ‘take your hands out your pocket’ and you don’t know why they’re saying that to you.”

Moving from his mostly Black high school to Georgia Institute of Technology, which was almost entirely white at the time, Ralph found the racial disparities jarring.

“I only had one Black professor the whole time I was at college,” Ralph said “That was a bit of an adjustment, [I felt] a little isolated.” Later, he moved to Chicago to complete his Ph.D. in anthropology, and once again was faced with another drastic change in environment.

In the interview with The Maroon, Ralph describes the University of Chicago as a “generative space” that fed his curiosity and helped him develop as a thinker.

“There’s so much going on intellectually and it was unlike any environment in terms of my intellect,” he said. “There were talks I wanted to hear, lectures I wanted to see, classes I wanted to take.”

But living south of Midway Plaisance at that time, he received shocked comments because that area was considered underdeveloped and dangerous. This reinforced the way the University felt like a socioeconomic bubble. “I got the same sort of feeling of living in a bubble where you have this wealthy university surrounded by poverty.”

Inspired by his time in Chicago, Ralph began his research into the past of police violence in the city and its suburbs. After all, as Ralph writes in the introduction section of the book: “Of the ten most populous cities in the United States, Chicago has the highest number of fatal shootings involving the police from 2010 to 2014.” Through his research, Ralph developed the idea of the “torture tree.” As a visual thinker and writer, Ralph imagined the intertwined themes of the complicity of people in power propagating torture and the United States of America’s history of violence against populations dominant society perceives as threatening to it. Rooted in the American history of lynching and slavery, Ralph describes the tree in Chicago as “a network of people and institutions that were connected to each other that kept growing branches and extending out…. [People already in power] were getting more and more power in city government.”

Ralph uses the word “torture” carefully. In his book, he wrote that “the danger is that such description can titillate readers and contribute to what Karen Sánchez-Eppler calls the ‘pornography of violence.’” He writes that he uses it both in the motif of a torture tree and in the title of his book because the victims Ralph met with did not want their stories to be shrugged off as a victim being “roughed up.” Ralph explained in his book that he didn’t want to attempt to censor the stories of the victims, but wanted the reader to react to the stories of the victims. Prisoners were electrocuted, cut, beaten, and brought up to a roof and threatened to be pushed off. They were suffocated, held at gunpoint, and other treatments that can only be classified as torture as defined by Ralph. Medical reports described injuries like “multiple bruises, swelling, abrasions,” “blisters…consistent with radiator burns,” and “a battered right eye.”

Ralph focuses the majority of his book on the power of city governments, the amount of resources allocated to policing, and the militarization of the police. Ralph emphasizes how governments prioritize policing, noting that Chicago uses $1.46 billion annually, about 40 percent of its budget, on policing.

“The militarization of the police,” Ralph wrote, “is often used to describe the way that military equipment once used overseas eventually are allocated to local police stations in small and large cities and towns across the United States. But less often discussed is how alongside this military-grade equipment comes a military mindset wherein the police treat residents as if they were enemy combatants, as if their job were to occupy and patrol a war zone.” Soldiers are trained to “start with the highest level of force and work their way down the continuum” while police officers are trained to “start at the lowest level of the continuum and then work their way up.” Most Chicagoans Ralph spoke to believed this distinction no longer exists.

When asked if preventing soldiers from becoming police officers in an interview with The Maroon, Ralph argued that the solution to police militarization was not as simple. Instead, he said, police officers need to stop receiving training that tells them to see policed populations as hostile.

“The deeper issue lies in the particular ideologies and particular training that allow both soldiers and police officers to see whole populations as enemies, and then act in ways that are outside of the law,” Ralph wrote.

One of the letters tells the story of Andrew Wilson, a Black man who shot and killed two police officers in 1982, and was the victim of torture by a police officer and former soldier, Lieutenant Jon Burge. Burge used a device called the black box to electrocute Wilson. After being tried and found guilty of the murder of the two police officers, Wilson filed a civil suit against Burge and the City of Chicago for his unconstitutional torture. During the trial, one of Wilson’s lawyers, John Stainthorp noted, “When Wilson discussed being tortured, he always ended up crying.... The black box was a psychological weight in Wilson’s life.... He still felt that electricity running through his veins.” Burge did not face any charges.

“The knowledge of Burge’s torture operation has disappeared, just like Burge’s torture device, buried at the bottom of a body of water, never to be seen again,” Ralph wrote.

“They would talk about how horrific it was for particular torture survivors to have gone through what they went through,” Ralph said of his conversations with police officers, politicians, and Chicago residents. “But oftentimes there was a caveat: There was an image of a really evil person who had to be tortured, and it was always there lurking in the background.”

After telling Wilson’s story, Ralph steps back and approaches the same story again—but this time from the perspective of the other police officers who witnessed Wilson’s torture but did not say anything. In his research, Ralph found that the actual participants in Wilson’s torture numbered fewer than 10 members. But through testimony or reports in at least one of the torture cases, the survivors identified a total of 67 officers who had direct knowledge of the torture. Ralph said he finds it important to focus critiques on the position police officers are put in rather than the people themselves.

Ralph recognizes that the police officers who knew about the torture were in the difficult position of choosing between coming forward about the actions of a superior or advancing their career.

“Even if someone’s not directly involved in the violence, there are so many complications that prevent them from coming forward and exposing it,” Ralph said. However, he points out that there are certain circumstances where people have to take risks. The issue, then, is motivating people in these positions to have the agency to come forward and speak out: “There are certain circumstance where people have to take risks and I’m trying to point out the necessity of taking risks when we don’t know what the repercussions would be and trying to motivate the people in these positions to take risks.”

Ralph said he chose to organize the book as a series of open letters to participate in an “unfinished” and ever-evolving dialogue with the people and groups implicated in the social problems he studies and to force himself out of the typical, discipline-imposed shell of objectivity. The book uses researched facts and information from testimonies but is not particularly objective. Ralph carefully chose whom he wrote letters to in his book. When asked to elaborate on why he did not write one to the torturer Burge, he admitted that he drafted many letters, but all of them felt fake.

“I wanted all the letters to feel genuine and authentic,” Ralph said. “I realized all the letters sounded fake because I didn’t believe that [Burge] cared. Nothing in the public record would suggest that he ever cared.”

Ralph’s later letters cover activists who were part of a movement called We Charge Genocide. A few of the activists were friends and family members of victims of police torture who honored their lost friend, daughter, son, sibling, mother, or father by fighting for a change.

The last few letters pivot to focus on torture in the context of the war on terror, specifically the torture Richard Zuley inflicted on Mohamedou Ould Slahi in Guantánamo Bay because Slahi was suspected of planning terrorist attacks at Los Angeles International Airport and the Toronto CN Tower on behalf of Al-Qaeda. Andrew Wilson’s torturer, Jon Burge, was a soldier before joining the police force in Chicago. Zuley, however, was a police officer for the Chicago Police Department before being recruited to Guantánamo Bay. To demonstrate the similarities between being a soldier and being a police officer, Ralph focuses on both Wilson’s and Slahi’s stories.

One of Ralph’s current research projects is a series of lectures he is publishing on the stories that particularly Black people tell about police violence and how retelling these stories is a way for black people to feel connected to each other. Another ongoing project is centered around New Orleans and its consent decree, in which a city police department comes under federal monitoring.

“It can change your idea of social belonging, and you can feel like you don’t belong. I would like to say that you do belong. I’m sorry this happened to you but you do belong and this is your space,” he said.

Ralph, the father of a three-year-old girl, hopes his daughter grows up in a world different than the one in which he grew up.
“I hope she lives in a world where people who make mistakes in their lives are not subjected to a punitive system that takes away their prospects for social mobility,” Ralph said. “I hope the world changes and I believe it can change in the way that we allow people to make mistakes. I hope [the world] allows them to transform into better people.” He hopes that The Torture Letters will challenge all Americans to demand an end to the systems that support police violence. Ralph maintains, “Torture is always wrong, and let’s move on from there.”