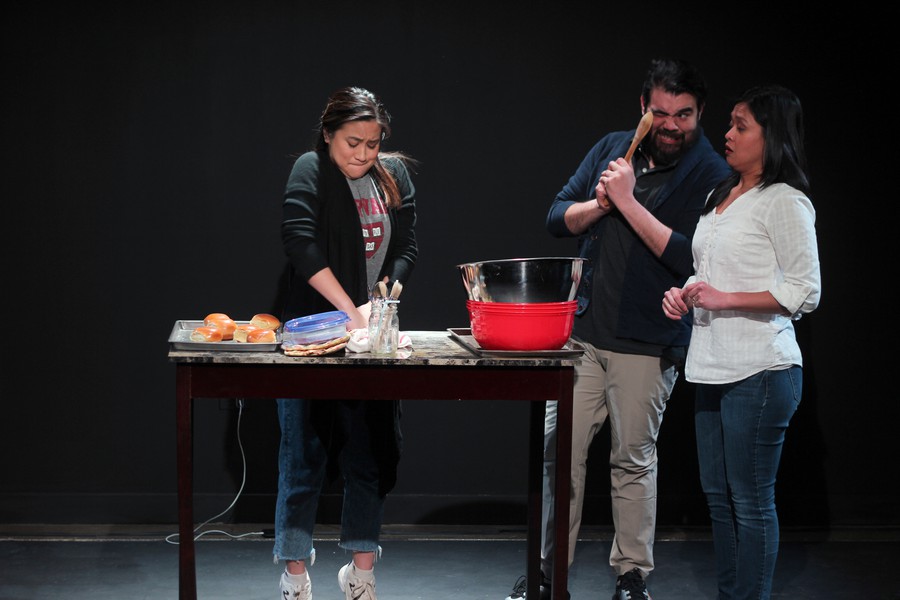 I love a good double entendre.

The pun on what it means to bake underscores the entirety of Baked! The Musical at the Chicago Musical Theater Festival, written by Deepak Kumar and Jordan Liu and directed by Taylor Stark. Featuring an all-Asian cast, the show explores the tensions of the Asian-American identity as examined through parent-child relationships and college affordability, all wrapped up in a realistic depiction of life as a modern high schooler.

Baked! begins with high school senior Jane Huang (Janelle Villas), and her parents, Yunzhou (played by UChicago alumna Vicky Snyder) and Mingli (Ryan Tang) making mochi to sell at their Chinese bakery. Jane finds out she has been accepted into Harvard and waits to hear back about a scholarship that would make university affordable for her family. When Jane learns that she doesn’t receive the scholarship, she hatches a plan to fundraise for all the money she needs so that her parents need not worry about supporting her through college. Initially, she opts for bake sales, in which she sits at a table with her best friend Kasey (Devon Hayakawa) and sells baked goods that she secretly makes at night in her family’s bakery.

However, upon learning that the school delinquent, Z (Yuchi Chiu), is making bank selling a strain of designer marijuana, the three team up and hatch a get-rich-quick scheme: bake sales, but the pastries are laced with weed. The operation succeeds (contrasted with the Huang family bakery, which is falling deeper and deeper into debt), until Mingli finds out and confronts Jane, while Yunzhou fails to get a loan to save the family bakery. In a split-second decision to save her reputation, Jane scares all the customers away. Jane, Kasey, and Z are left with no other option but to sell to the mob—well, the Pepsi mob. After Z nearly loses his life in the following altercation, the baked business breaks up and Jane’s guidance counselor, Mrs. Feldman (Anna Brockman), who works as a cop on Tuesdays and Thursdays, reveals to Jane’s parents that she didn’t get the scholarship. Kasey and Jane’s friendship disintegrates as Yunzhou reminds Jane that one’s response to failure doesn’t have to define one’s life. A year later, Jane attends the same local college as Kasey (though they aren’t friends anymore) and still works at her parents’ bakery, now called Baked!

Every actor in this cast gave an incredible performance. The music was electrifying, and every time an actor sang, I was in awe. It was great to finally see a musical where the teenagers feel real. As Jane, Janelle Villas evokes pretty much exactly my senior experience with college acceptances and scholarships. Devon Hayakawa’s nuanced performance as Kasey Young grounded Villas and brought breathtaking life and heart to the entire musical. Ebeneezer O’Ryan (or Z, as we knew him in the musical) was fully fleshed out beyond simply comic relief, attesting to Yuchi Chiu’s skill in this musical. Vicky Snyder and Ryan Tang, as Yunzhou and Mingli Huang respectively, both excellently portrayed the anxieties of being the parents of a teenager soon to be off to college. Snyder, in particular, captured the essence of the struggle of an immigrant parent supporting family back home. Although Anna Brockman’s Mrs. Feldman was also written to be more comical, she too has a humanity in her almost-too-bright-to-be-real character, especially in her double role as a cop (which hints at the issues with low teacher pay). The ensemble (Murtaza Kapasi, Joselle Reyes, Adit Marciano, and Eunice Park) rounded out a rock star cast, transforming between teenagers, Pepsi mobsters, patrons of the bake sales, and more.

The designers of this show clearly knew how to create a fulfilling show with the tools they had—though the show was performed in a three-quarter thrust black box with limited set capability, the stage was believable as a high school, the bakery, the bake(d) sales on the side of the road, and every other location in the show. The limited number of props heightened the significance of the few that were there: a particularly memorable one was a photograph of the Huang family in Jane’s childhood, which served as a powerful accent to the song “Know You the Most,” which, as a recent high school graduate and college freshman, brought tears to my eyes.

Overall, this musical was a heartwarming, earworm-y testimonial to the power we have in planning for the future. Though it covered many controversial topics like funding for higher education, racism, and misogyny, I never felt I was being told what to believe. Instead, Baked! became a lens through which I could view an example of how these issues intertwine in reality. Before the lights came up at the end of the show, I paused to reflect: though Jane failed many times, she still found the success that she needed, even if failure, according to the closing song “That’s It,” sometimes “just sucks”.