The Jungle Giants Is On Fire—No, Seriously

Read our exclusive coverage and interview with Australian indie-pop band The Jungle Giants. 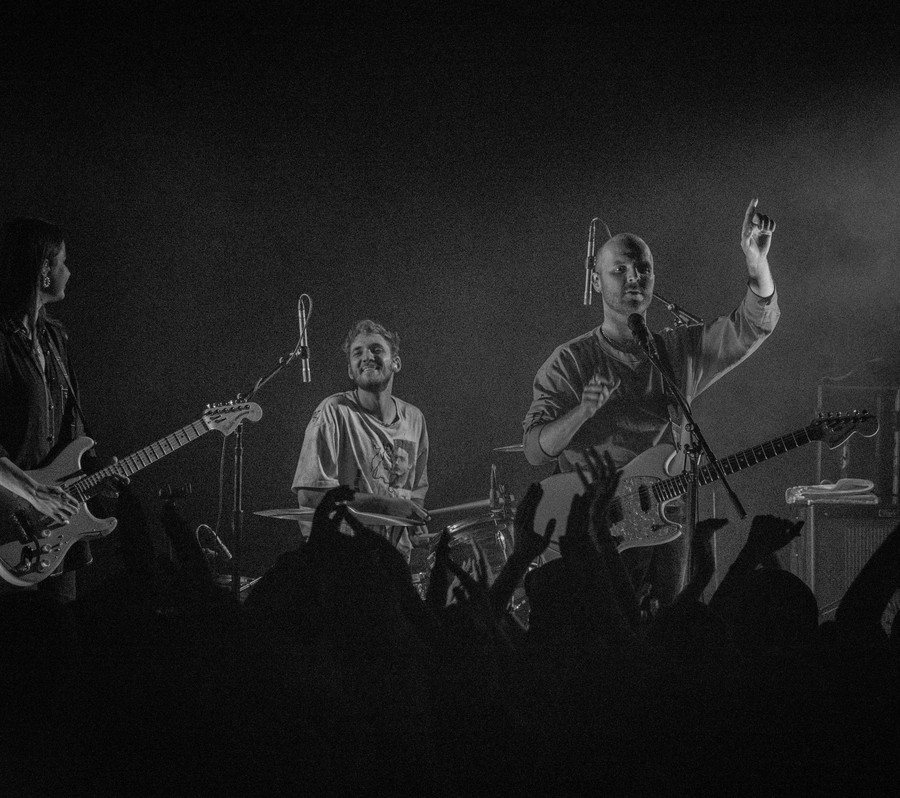 Purple lights reflecting off smoke as a guitar medley echoed around the room; that’s how The Jungle Giants opened their show at Lincoln Hall on February 13. The show itself was like that of any other indie pop rock band, with colorful lights and fog machines galore. In its normalcy, however, lies an unbeknownst fact: this band knows how to put on a show. They didn’t need pyrotechnics and crazy visuals to keep the crowd alive—their presence sufficed. Their combination of edgy guitar riffs, dreamy vocals, and undeniable chemistry work together to create the ultimate 21st-century indie pop rock machine.

I arrived at the venue about 20 minutes after the doors opened, nervous I would be buried behind the sea of screaming fans. I was instead surprised to find the space still relatively empty, with only about 15 or so people littered around the room, making small talk with the people around them. The venue itself was small, and I had my fears that it might not fill up by the time the show rolled around, or that having so few people might hinder the band’s ability to put on a good show. However, it’s clear that they hold an innate ability to captivate any crowd they perform to. Any newcomer who had not previously attended a show of theirs was instantly transformed into a fan, eager to see the band again after the show had ended. 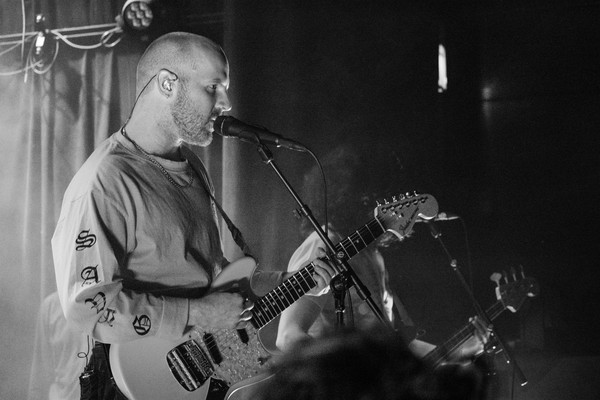 The band has been together for nearly a decade, releasing their first EP in March 2011. However, their personal friendships go back almost all the way to grade school, Andrew Dooris (bass) and Keelan Bijker (drums) having met in grade one. The rest of the band met in high school. According to front man Sam Hales, their music is a combination of influences from artists as various as LCD Soundsystem and Hot Chip. Their latest album, Quiet Ferocity (2017), created a number of popular singles, including “Feel the Way I Do” and “Used to Be in Love”; the album itself reached 11 on the ARIA Top 100 Albums chart. Their upcoming album, scheduled for release sometime later this year, contains the single “Heavy Hearted,” their first to chart within the ARIA Top 100. “Sending Me Ur Loving,” their most recent release, will also be featured on the album.

Before the show, I sat down with the band on their tour bus to chat. As soon as I stepped on the bus, I was met with a hug from each of the members, all of them eager to introduce themselves. After spending only a few moments with the group, I felt right at home, almost like I should pick up an instrument and hit the road with them—who needs finals, anyway? Their eagerness to perform shows, meet fans, and explore the world accurately depicts their love for the industry; and it’s blatantly obvious that they have a true passion for what they do.

The interview has been edited for publication purposes.

Chicago Maroon: How has the tour been so far?

Keelan Bijker: Pretty full-on, like back to back [shows], fast-paced, but it’s been great.

CM: Has anything crazy happened to you since you’ve been on the road?

Andrew Dooris: Yeah, there have been two crazy bus incidents because we did also break down, literally on the border of Canada and America; we couldn’t have been more halfway.

Sam Hales: Yeah, at the bit where it's arguable which part of which country you’re in. We also got woken up one night, where police were knocking all over the bus. It was like six in the morning and we could just hear this knocking; I thought it was in my dream. I looked out the window and it was just a bunch of cops with their lights on and I was like, “Oh my god, [Andrew] Dooris what have you done…”. Then we opened the door and I heard the cop say to Anthony [tour manager] “Excuse me, sir, your bus is on fire, sir.”

CM: I’m sure when you’re woken up like that it's got to be pretty scary…

SH: Yeah, we just all piled out. But, other than that, we’ve just been meeting a lot of people and enjoying Flaming Hot Cheetos. We’ve been eating every kind of food that each city is famous for.

CM: Have you tried deep dish?

SH: I personally haven’t yet, and that is something that I’ve got to do. You just have to tactfully eat that because there’s a lot of cheese. It sounds kind of terrifying, plus we always have a show impending in the back of our mind so it’s like… should I eat the entire block of cheese?

CM: What’s been your favorite venue or show that you’ve played, whether it was on this tour or not?

KB: I liked the Fortitude Music Hall. That was a fresh one; that was a new venue.

AD: There’s a whole bunch of chandeliers; they’ve just built it purposefully, it’s really perfect. It was one of our biggest shows ever because we had two sold-out nights, so that was really cool. I don’t know though, playing New York at Bowery Ballroom, that was so nice. It was really kind of defining.

SH: I really liked the look of Johnny Brenda’s in Philadelphia. That was a small room but it looked amazing, it looked kind of Gothic—like if the Addams family had a tiny venue in the back of their mansion. It was really dark and everything was dimly red-lit. But, there was weird stuff like the mantle of the staircase: it was a bowling ball with a glove cemented inside it; there were lampshades with faces in them... It was spooky.

CM: What is your favorite song to perform?

CM: What is your favorite album or song at the moment?

CA: Mine is Clairo at the moment.

AD: If you ever interview [Clairo], can you let us know?

SH: I go through cycles where I listen to heaps and heaps of music, and then I listen to nothing except my own stuff.

KB: I like to try and go back to what was released this month a couple of years ago, like three or four years ago, and try and relive to see if the record holds up.

SH: I’ve been listening to this album that a friend showed me, by Angélique Kidjo. It’s a 90s record, but it’s really thumpy stuff that you could put on at either midday or 4 a.m. and it would still be really good.

AD: I listened to the new Khruangbin album with Leon Bridges, and that was really nice. It’s only an EP, but I really liked it. It was really moody and nice. Leon Bridges is kinda sexy and he has a beautiful voice, so with Khruangbin, it was so good

SH: I saw them live once; they were the best. They jam for so long; usually, it’s like okay they’ve been jamming for eight minutes now, but with them, it’s really cool.

CM: Who is your biggest musical influence?

SH: For me at the moment, for the Jungle stuff, it is probably between three: Hot Chip, Metronomy, or LCD Soundsystem. It’s a three-way tie. It might be Hot Chip [coming out on top] because it’s getting a bit house-y now.

CM: What is the biggest difference between your first album and the music you’re releasing at the moment?

SH: A whole spectrum of things; life, for one. We were little babies when the first album came out. We were 17 or 18, and since then I’ve gone through a big process of learning how to write music better and actually demo my own music and listen back to what I’m recording. That was a big change, because it used to be like “Here’s a guitar part, can you record it, sir?” Now I’m able to sit by myself in a studio and write and record and play with ideas. That’s probably been the biggest change, because I can actually develop an idea before I bring it to other people.

CM: Speaking of developing new music, how is the next album coming along?

CM: Where are you at in the process?

SH: So we’ve got two songs released already, and I’m getting pretty close [to finishing the record]. I’ve got mixing booked in March and that will pretty much be the end of the record. I feel really confident, and it’s a lot of working on it on the fly, but ya know, it's been like that for the past six months, so I’m getting pretty used to it by now.

CM: Is it difficult to make music while you guys are on tour?

SH: I never really make music when I’m touring, but I’ve got a little setup on the bus where I’m just editing and doing housekeeping; deleting and re-recording stuff that sounds bad. As opposed to writing music… I’ve never really been good at writing stuff while I’m touring unless it’s just recording ideas on my phone; that’s really fun [to do] when you’re walking down the street.