On First Day of Final Push, UChicago for Bernie Reflects on Months of Buildup 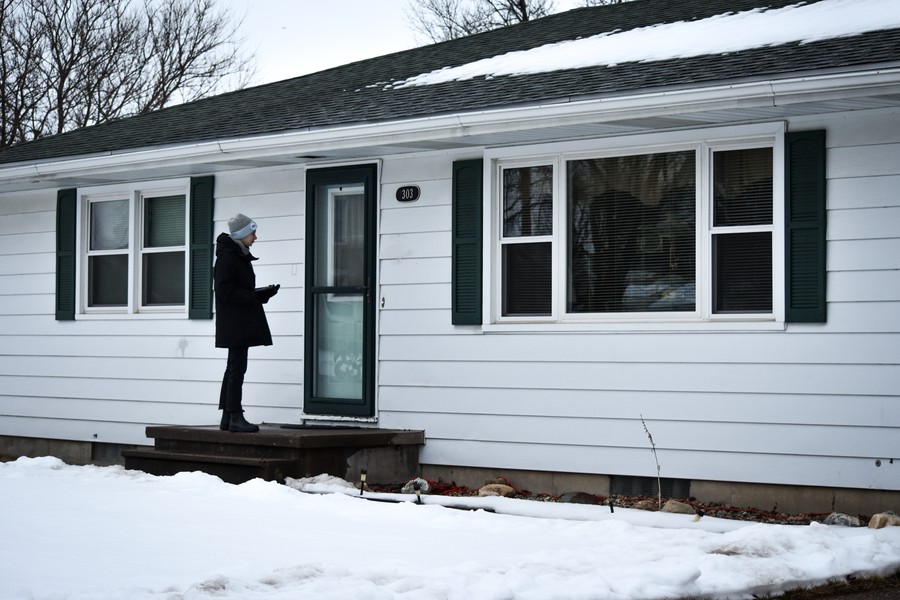 A UChicago for Bernie volunteer knocks a door in Iowa City.

IOWA CITY, Iowa: A little after noon on February 1, the car carrying canvassers with UChicago for Bernie takes a wrong turn on an unpaved road somewhere near Iowa City, Iowa. The canvassers are searching for a house belonging to the Sanders campaign’s regional field director, where several UChicago for Bernie organizers are staying.

Over the course of multiple trips to Iowa, the group’s volunteer base has developed close relationships with campaign staff—so close that UChicago students this weekend will camp out not only in regional field director Jodi Clemens’s house, but in the homes of her mother, mother-in-law, and aunt scattered around Iowa City.

This is UChicago for Bernie’s sixth trip to Iowa since November to canvass before the Democratic caucus on Monday. They’ve brought close to 130 people on this trip from Chicago to Davenport, Waterloo, and Iowa City.

Most of the canvassers are UChicago students, but UChicago for Bernie has become a rallying point among students supporting Sanders from the broader Chicago area as well. The group also plans to send members to other schools in Illinois ahead of the Illinois primary in order to support the leaders of other Students for Bernie chapters.

“I’m so proud UChicago has such a strong Bernie chapter,” said Kit Ginzky, lead organizer and a Ph.D. student in the School of Social Service Administration. “There are so many schools with huge numbers of working students for whom getting involved in this work could be really effective and meaningful and a good experience but they’re working students so they might not have [the infrastructure] set up.”

According to Ginzky, the group began as a meeting of a few Sanders supporters and gradually grew into a more robust organization that has held rallies on campus and hosted weekly phone banks. Ginzky recruited students she saw posting pro-Sanders content on Facebook, offering them the chance to advocate for their candidate offline as well.

Ginzky estimated the volume of work UChicago volunteers have contributed to be equal to multiple full-time staffers.

“Among our core organizers, we’ve probably put in the equivalent of three full-time workers for the campaign,” Ginzky said.

Most Sanders canvassers have what they call a “Bernie story”: a personal narrative illustrating their connection to Sanders’s platform or the power of his ideas.

Ginzky’s grandfather, an Army veteran and farmer in southern Illinois who voted Republican most of his life, heard Sanders speak on television and was won over. For the holidays that year, Ginzky gave her grandparents Sanders merchandise. Ginzky’s grandparents became such committed Sanders fans that when her grandmother passed away suddenly a little over a year ago, Sanders wrote her grandfather a condolence letter. Ginzky cited her grandfather’s support as an example of Sanders’s cross-generational appeal.

“Seniors and millennials share this need for a stable public social system,” Ginzky said, explaining that programs like Medicare for All respond to concerns held by both demographics.

When Ginzky and her colleagues were initially forming UChicago for Bernie, she said they wanted to make sure that Sanders’s alma mater represented him in a way characteristic of the University’s distinctive identity.

Ginzky described one of the peculiarly UChicago moments from a past Iowa trip that she felt characterized UChicago for Bernie. On the drive back to Chicago after a canvassing weekend, both Kit and her husband Ben Ginzky shared a car with first year mathematics Ph.D. student Chris Wilson. After hearing the Ginzkys talk about wishing they’d taken more math courses as undergraduates, Wilson invited them to audit his calculus class and launched into an explanation of several proofs in analysis and set theory that filled the long hours on the road.

“That really guides us,” Ginzky said, “the life of the mind and the practice of solidarity among workers.”