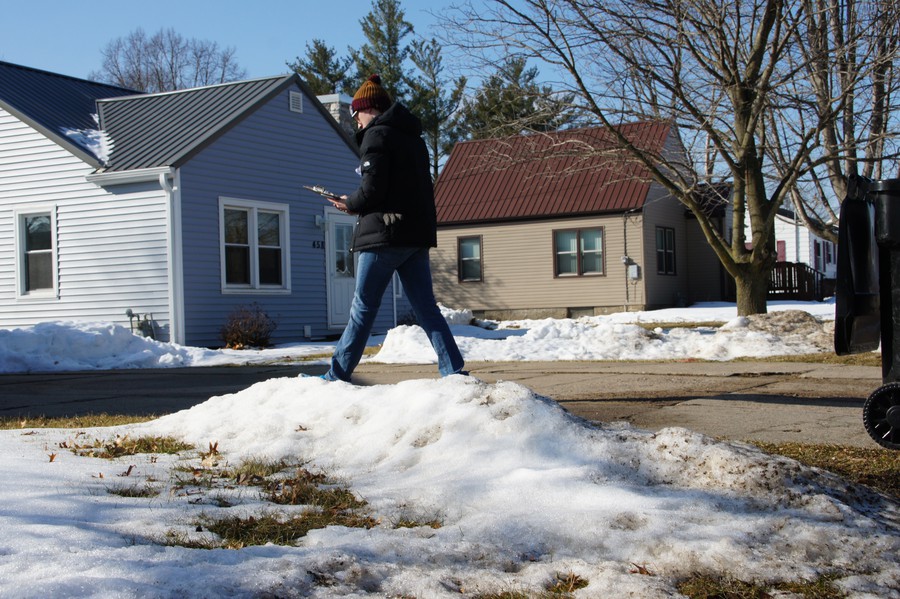 UChicago for Pete organizer Jacob Sher canvasses on behalf of Pete on the last day before the Iowa Caucuses.

NEWTON, Iowa: UChicago for Pete took the message of the former South Bend, Indiana, mayor Pete Buttigieg to Marion, Iowa, a suburb of roughly 40,000 people, on Sunday. The student organization spent Saturday canvassing in the city of Newton, home to around 15,000 people, where they were being housed by local campaign volunteers.

After the volunteers received turf assignments from Buttigieg’s Marion office, they split up to individually knock doors in the city’s residential areas.

Many of the doors UChicago for Pete volunteers knocked on were already draped with materials from other campaigns.

The volunteers found that many Iowa caucus-goers remained undecided and wouldn’t decide who to support in the caucus before hearing speeches at the event itself.

Michael Hora, a Marion resident and precinct captain for the Buttigieg campaign, was counting on Buttigieg’s personality to win over voters on Monday.

“I think it’s authenticity, and just realizing that someone like Pete has very similar values to all the people that really live in this neighborhood,” he told The Maroon.

Marion resident and Buttigieg supporter Alex Lewis is attracted to the candidate’s moderate policy stances, which she thinks make him electable.

“I think some of the other candidates are too liberal and won’t appeal to a majority of people who maybe were Trump supporters before and don’t want to vote for him again,” she said.

Second-year Zander Arnao, UChicago For Pete’s membership and recruitment coordinator, told The Maroon that his conversations with voters have been comparatively light on policy and heavy on electability.

Many residents told the canvassers that they would not be able to make it to the Iowa caucuses, which started at 7:00 p.m. on Monday and can last several hours, citing various reasons.

The first voter to answer the door for first-year graduate student Grace Wright, who serves as UChicago for Pete’s communications coordinator, was one such case. He told her he would not be able to make it to the caucus because he has to work until 8:00 p.m. tomorrow.

“I have heard that [response] from various people for various reasons,” Wright told The Maroon, adding that health concerns and childcare responsibilities are two other frequent causes given for skipping the caucuses.

Hora, for his part, is doing his best to balance childcare and his political responsibilities.

“Our kids all have sports practices,” Hora said. “We’re skipping a couple. One is going to practice while the caucus is going on and then the other two are going with us to the caucus.”

Arnao said that the logistical barriers facing Iowa voters make the role of campaign volunteers more important. The Buttigieg campaign, he said, is trying when possible to offer accommodations to voters who might not otherwise make it to the polls.