The community open house, held Thursday night after the release of the development proposal, left residents with more questions about the future of Woodlawn’s development. 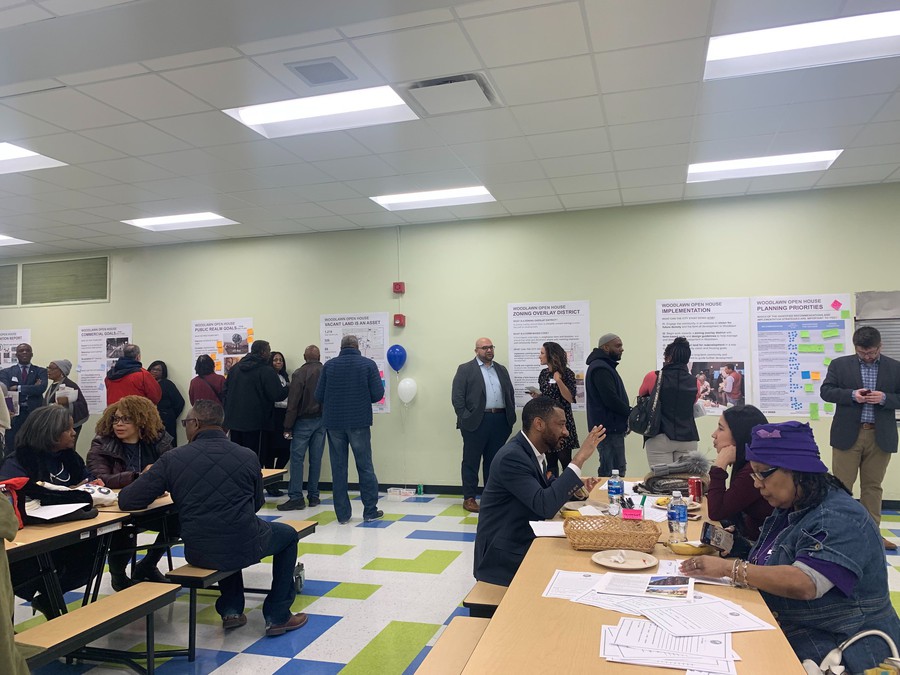 Woodlawn residents gather for a town hall with City officials.

At the Woodlawn Community Open House, an event hosted by the Mayor’s Office, Department of Housing (DOH) and Department of Planning and Development (DPD) officials took feedback from residents on a draft ordinance for neighborhood development.

At the Thursday event, officials from DOH and DPD lined the walls of the Hyde Park Academy High School’s cafeteria with large posters detailing the findings of the Woodlawn Plan Consolidation Report. Representatives from the departments gave interactive presentations explaining the details of the Woodlawn Affordable Housing Preservation Ordinance where residents could give feedback on the city’s proposal; the Mayor’s Office hopes to introduce the ordinance in February ahead of the building of the Obama Presidential Center in Jackson Park. These stations also included demonstrations where residents gave feedback on issues including the Chicago Community Land Trust and plans for City-owned land in Woodlawn.

According to Don Terry, Director of Communications at the DOH, the DOH and DPD collectively decided to organize the event with various presentation stations available to residents so officials could directly engage and answer questions.

Devondrick Jeffers, housing organizer for Southside Together Organizing for Power (STOP), personally, did not find the format of the open house to be productive, saying the stations took away the opportunity for community members to ask collective questions about the Mayor’s proposal.

“Frankly…it feels like divide and conquer. You got folks all over the room asking questions, the questions might be the same, you wouldn’t know because they are separate questions,” Jeffers said.

The department officials, including DOH Commissioner Marisa Novara and DPD Commissioner Maurice Cox, took questions from residents and encouraged those in attendance to fill out feedback forms concerning the development proposals. Officials told residents the forms would be a part of efforts to incorporate community input in the final draft of the ordinance before introduction to City Hall.

Sharon Payne, a Woodlawn resident since the 1980s who attended the Forum on Displacement hosted by the Obama Center Community Benefits Agreement Coalition on Tuesday, felt cautiously optimistic that the City would consider feedback from residents, saying, “I think the City hears us, but is not necessarily listening.”

Another Woodlawn resident, Venus, who has lived in the neighborhood throughout her life, wants to see greater collaboration with all groups involved in Woodlawn’s future development.

Venus said she would have liked to see a clearer, centralized presentation of information in the Mayor’s proposal, but ultimately is willing to give the Mayor’s Office a chance in crafting a development plan that includes affordable housing for current residents to stay in the neighborhood.

“I have to be optimistic. I have to maintain hope,” Venus said.