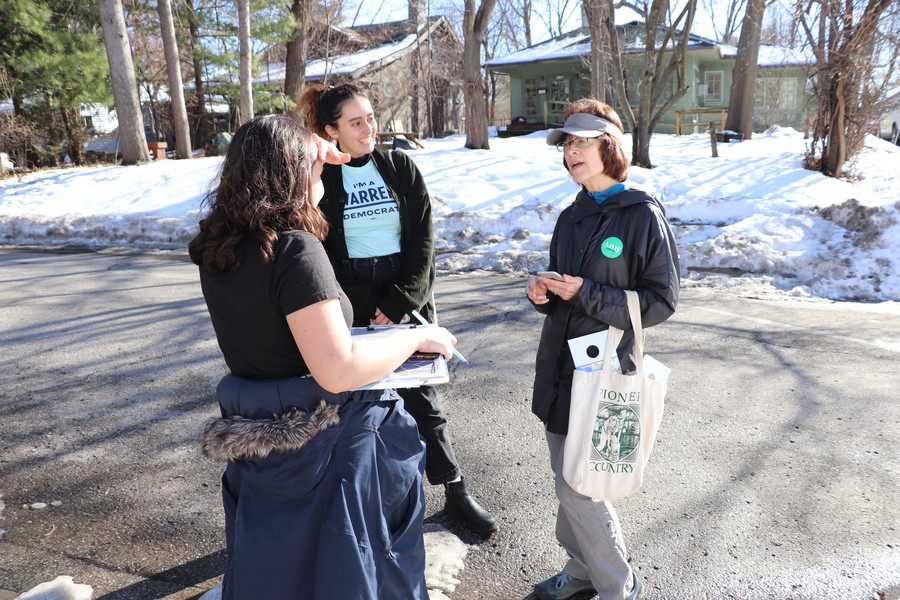 UChicago for Warren volunteers run into a volunteer for Amy Klobuchar out canvassing in Des Moines.

DES MOINES, Iowa: As 7 p.m. on Monday, February 3, the start time of the Iowa caucuses, approached, students volunteering with UChicago for Warren experienced a mix of excitement, anxiety, and suspense.

Third-year and co-chair of the group Celia Hoffman likened the feeling to the anticipation she felt before crew regattas in high school.

“I kind of felt like I was waking up for a race. You get up early, you pull yourself together, you’ve been training, and it is what it is. You give it your all, and we’ll see what happens,”Hoffman said.

But the caucuses had higher stakes than an ordinary race to Hoffman.

“This does feel like the championship, even though it’s the beginning of the season,” she said, referring to the fact that Iowa is only the first state in which parties choose a presidential nominee for the general election in November. The party’s choice of nominee will not be final until this summer.

The caucuses were the end of a long road for Hoffman, who worked on the Warren campaign over the past summer through the Institute of Politics’s Iowa Project along with third-year Sofia Cabrera.

“It’s a long time coming. It’s a big culmination. Sofia and I have put in a lot of hours, and it’s finally here,” Hoffman said. “I’m excited to see Elizabeth Warren win tonight.”

Asked how she was feeling after an early morning of caucus-day canvassing, Cabrera responded with one word: “Caffeinated.”

Second-year and co-chair of UChicago for Warren Michael Ryter said that he was having trouble letting the chips fall where they may.

“It’s a tough feeling knowing that you’ve done all you could do for the last eight months, and we’re four hours away,” Ryter said. “There’s not much you can still do.”

Ryter felt his anxiety building as the caucuses approached, but he remained focused on the group’s main goal: to best serve the Warren campaign.“You get a lot more nervous when there’s not much you can do to pass the time,”Ryter said. “Now, we’re just waiting, and getting to our precincts early, and doing the best job we can on site tonight.”

Ryter knew that he wasn’t the only person feeling the suspense, and that the eyes of the political world would be watching Iowa the night of February 3.

“It’s a really exciting and nervous moment: for us personally, and also for the country.”