10 Days Before Illinois Face-Off With Biden, Sanders and Surrogates Rally in Grant Park 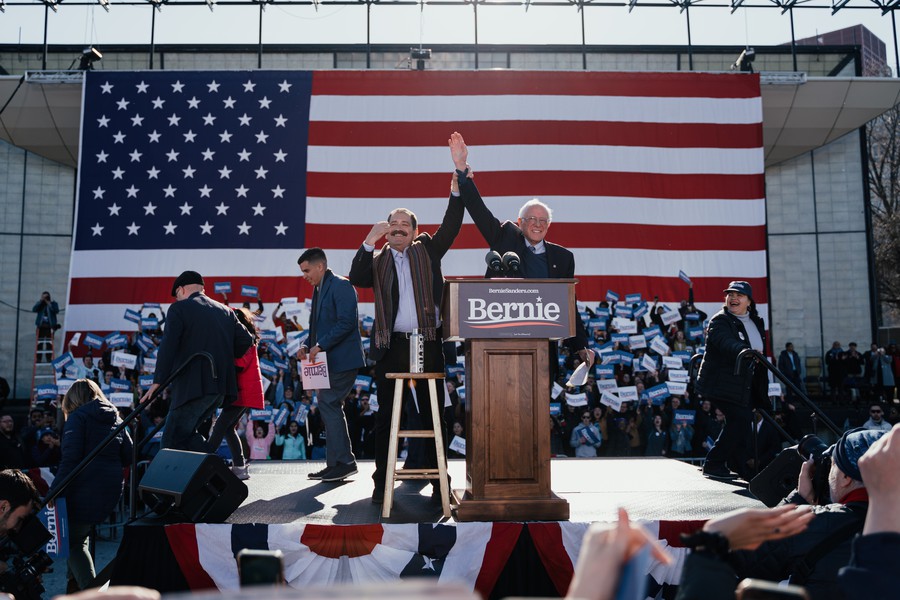 By Alexis Florence   and Caroline Kubzansky

About 10,000 Chicagoans turned out to see Vermont Senator Bernie Sanders (A.B. ’64) speak at a rally in Grant Park on Saturday afternoon. The event took place just 10 days ahead of his face-off with former Vice President Joe Biden for the Democratic presidential nomination in Illinois.

Sanders and Biden are the last two candidates with a viable path to the Democratic nomination. Hawaii congresswoman Tulsi Gabbard has not formally dropped out, but has garnered less than two percent of support.

Sanders spent the first part of his stump speech drawing a contrast between himself and Biden. Sanders supporters frequently cite his consistency on issues throughout his career as a main reason for backing him, and Sanders hearkened back to his history in making a case to Chicagoans.

“I think now that the primary nomination process is coming down to two people, it is important for the people of Illinois to understand the differences between us in terms of our records,” Sanders said.

He specifically stressed his and Biden’s divergences on foreign policy and Wall Street.

Sanders also called the free trade agreements of the 1990s “a disaster.”

“It was unfair to ask the working people of this country to compete against countries whose workers are making starvation wages. Joe was wrong; I was right,” he said.

However, he added, Democrats need to unite behind whoever the nominee is in November.

“Out of all 18 candidates, we all understand we are going to get behind the winner because together we know that our differences are far, far less than our differences with this dangerous president.”

Sanders invited local politicians and organizers to speak on his behalf at the rally. District 13 State Senator Robert Peters, who endorsed Sanders this past summer, proclaimed that Democrats need to dream of big policy changes when casting their ballots in March and November to beat Donald Trump, not default to moderation for the sake of electability.

“This is not a time for us to think small,” Peters said. “We must think big, because when we think small, Donald Trump wins. We must be tough, and follow our dreams.”

Sanders appealed to Chicago’s strong history of unionization and invited union representatives from National Nurses United and United Electrical, Radio and Machine Workers of America to the podium. Stacy Davis Gates, vice president of the Chicago Teachers Union (CTU) spoke to the crowd, advocating against choosing a more moderate candidate. She and Jesse Sharkey, president of CTU, announced personal endorsements of Sanders this past Wednesday.

“See, moderation is a dream killer,” Davis Gates said. “This movement is about making America a place for everyone who needs healthcare, who needs education, who needs a safety net.”

Laura Colaneri, a member of the UChicago Graduate Students Union (GSU) attended the rally and said her personal support of Sanders was strengthened by her organizing on campus and Sanders expressing his support for GSU in 2017.

“I still supported Bernie in 2016 but this [working in GSU] has really strengthened my support for him a lot,'' Colaneri told The Maroon. “There’s support for grassroots organizing, for workers on a day-to-day level.”

First-years Selma Chab, James Soh, and Carissa Greene were asked to stand onstage behind Sanders for his speech.

Carissa Greene attended the rally in her UChicago shirt, and said that she was excited to represent the University onstage, especially because she sees a connection between her path to UChicago and the policies that Sanders would enact as president.

“I want people at this University to see that we showed up.... I’m proud to represent our school and students who are struggling and fighting, as a low-income student,” Greene said. “As someone who has fought a lot of adversity getting here, someone from the deep south, a queer black woman, it means a lot to be here and represent my school at the stage.”

Greene also cited the University’s commitment to free speech as a reason why she felt it was important to represent the University onstage.

“UChicago says it stands for freedom of expression and free speech, and this is as good a place as ever to do it, supporting the best presidential candidate we’ve seen in a while,” Greene said.