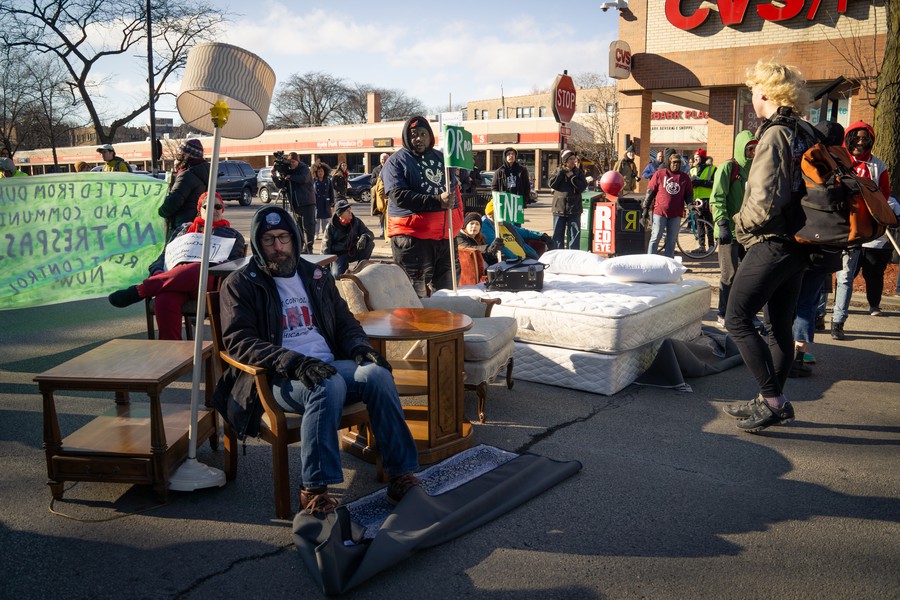 On Friday, protestors with the Lift the Ban Coalition unloaded a mattress, chairs, rugs and a lamp from a U-Haul truck in front of Illinois 25th District State Representative Curtis Tarver’s Hyde Park office. They blocked traffic on 53rd Street for over two hours in protest of Tarver’s perceived change in stance on HB 255 and the overall issue of rent control in Illinois.

HB 255 was introduced in Springfield at the start of last year by 39th District State Representative Will Guzzardi. If passed, HB 255 would repeal the 1997 Rent Control Preemption Act, which prohibits local governments from controlling rent prices. The bill hit a roadblock when it was voted down by the Commercial Law Subcommittee in March of last year. Tarver, a member of the subcommittee, voted against advancing the bill in the legislature.

The Lift the Ban Coalition includes groups who advocate for affordable housing across the city. Helena Duncan, a 25th district constituent and member of the Coalition, explained her disappointment with Tarver and believes that voting against HB 255 is in direct conflict with the desires of his constituency.

In the 2018 primary elections, members of Tarver’s state district in the Fourth and Fifth Wards of Chicago overwhelmingly supported lifting the ban on rent control.

“We’re just asking him to actually represent the will of the people in his district who are suffering from really high rates of eviction and rent burden and to do this very simple step of repealing this law that should have never been passed in the first place,” Duncan said.

Bobby Brown, a member of the Lift the Ban Coalition who is also a member of the Kenwood Oakland Community Organization (KOCO), has been a resident of Englewood for 30 years. She feels that Tarver has “sold out” his constituents on the issue of rent control. Brown referred to a 2018 town hall during Tarver’s initial election to Springfield in which Tarver was reported supporting rent control measures. “He was wishy-washy all the time so we really see him for who he really is,” Brown said.

Tarver was not in his office during the protest and did not immediately respond to The Maroon’s request for comment. Last year, Tarver was quoted saying, “I don’t want to support something that’s ultimately not sustainable. [Rent control] might be marginally helpful in the short-term but ultimately causes more damage than it does good.”

Other groups, such as the Chicagoland Apartment Association (CAA), are working to oppose HB 255 with their SHAPE (Support Housing Affordability, Progress and Equality) Illinois campaign, which they say “take[s] a stand against harmful legislation that would enact devastating rent control measures now working their way through the General Assembly.”

Representatives with the UChicago Graduate Student Union (GSU) and the UChicago Chapter of Common Cause Illinois participated in the protest.

Laura Colaneri of GSU spoke to the audience of the protest about what she feels is “UChicago’s complicity in raising rents in Hyde Park,” through decreasing subsidize housing units for graduate students.

Colaneri proclaimed solidarity with the Lift the Ban Coalition and condemned the University for decreasing the amount of subsidized housing for students, pointing to rent costs as a major concern for GSU members according to their 2018 bargaining survey results.

AK Alilonu, a fourth-year with the UChicago Chapter of Common Cause Illinois, spoke to The Maroon about the need for UChicago students to pay attention to rent control legislation and act in support of the Lift the Ban Coalition.

“Our being here has a very real effect on the community surrounding us,” Alilonu told The Maroon. “From people you see in the dining halls to people who own the businesses where you get lunch, our being here every day makes it more and more difficult for people who are not affiliated with this university and who live in the neighborhood to survive.”