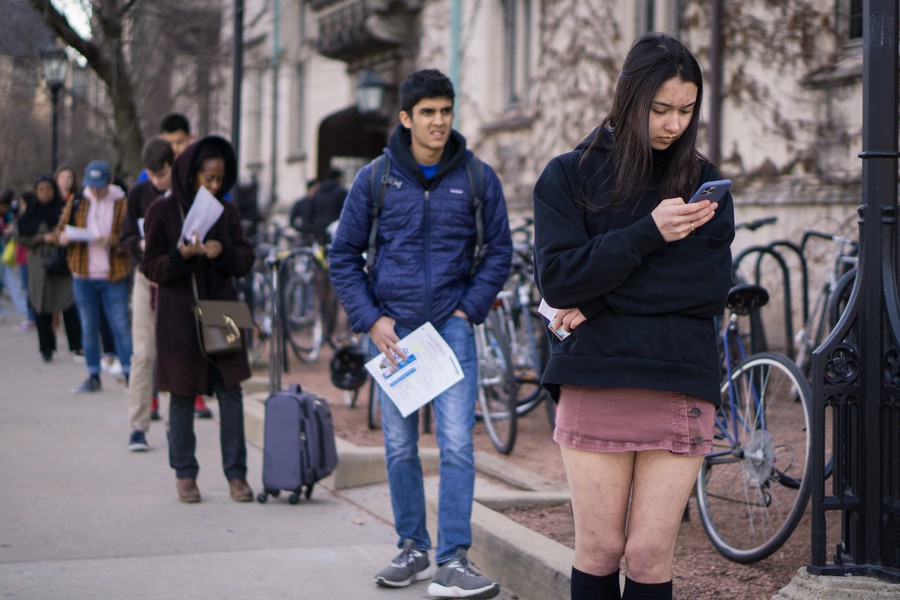 Voters social distancing while waiting in line to vote.

UChiVotes, a student-led initiative of the Institute of Politics, organized an early-voting site in Reynolds Club between March 11 and 13. Though voting procedures were changed in response to growing concerns about the novel coronavirus, students were still able to cast their ballots. 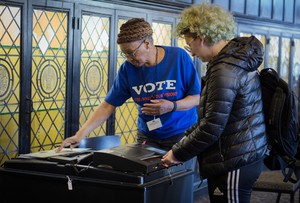 Voters were told to stand six feet apart from each other in order to abide by the social distancing measures recommended by the Centers for Disease Control and Prevention (CDC). The UChiVotes team had marked this distance in blue chalk and tape, and regularly reminded those in line to maintain the distance. UChiVotes also provided hand sanitizer and regularly disinfected the voting machines.

UChiVotes co-director fourth-year Kate Clement said that the organization started planning over the summer, knowing voting would take place during finals week. After coordinating with the Chicago Board of Elections, Reynolds Club was approved as an early voting location in October. 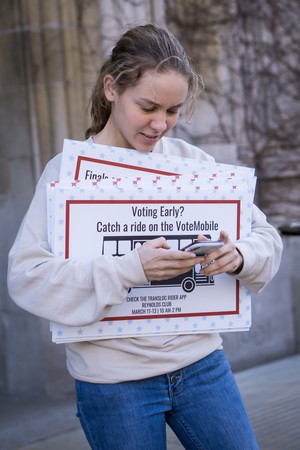 After the University announced sweeping changes to spring quarter in response to the coronavirus, UChiVotes acted quickly to ensure voting could proceed, said second-year Julianna Rossi, communications director of UChiVotes.

“We wanted to come up with a method so that people wouldn’t be afraid to come out and vote, and so we followed the CDC’s recommendation to practice social distancing, all that stuff,” Rossi said.

Much of the plan was unchanged: Voting still took place in Reynolds Club, and there was a bus available to bring voters to the site.

“What did change was that we had to put out a message about safety and public health, we had to stock up on hand sanitizer and all that. It was really a lot of work just to show people that they really are safe when they’re voting,” Rossi said. 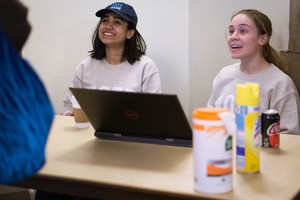 Clement told The Maroon that more than 300 people voted at Reynolds on Friday, more than any of the other days the site was open.

While the voting site was organized by UChiVotes, many of those working at the site were not University students.

“I would love to see more student poll workers. We have all these sweet old ladies who are currently our poll workers, and I’m running around hand sanitizing the doors because a quarter of poll workers are senior citizens in this state,” Clement said.

On Friday, a voter at Reynolds Club said the public health measures UChiVotes implemented were a good idea.

“Ideally we don’t want to be out of the house because of coronavirus, I knew they were going to do social distancing, and there’s going to be a lot more cases by the time normal voting comes around. I tried to get a mail-in, but the system wasn’t working, so I wasn’t able to get a mail-in ballot,” he said. 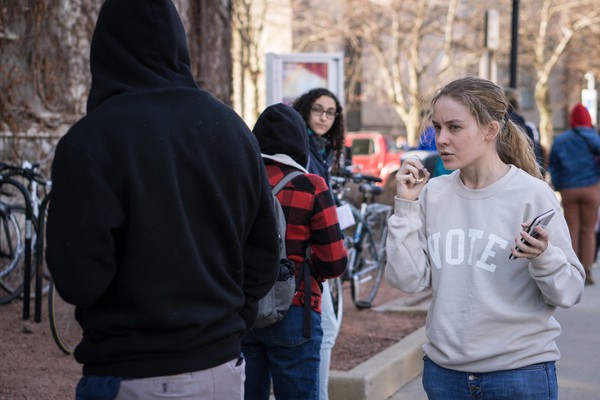 Asked about the effect the coronavirus had on early voting, another voter said, “I think that it’s definitely on everyone’s mind.”

“My panic over coronavirus did not penetrate the mind-numbing boredom that the process of voting creates,” she said.

Several states have postponed primary elections in response to the coronavirus, including Georgia, Kentucky, Louisiana, Maryland, and Ohio, against the Democratic National Committee’s request for states to continue with primaries as scheduled. The UChiVotes website has updates on the latest changes to state primaries. 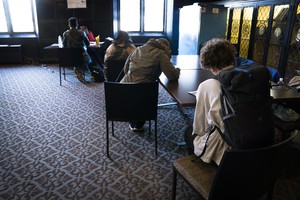 Voters filling out documents to register to vote.

Illinois Governor J. B. Pritzker, who endorsed Joe Biden on Monday, said he believed it was safe to go on with the Tuesday primary election. WGN9 reported that on Illinois primary day, “At least 50 polling sites opened late, and hundreds of poll workers backed out last minute over fears of the virus. Chicago Board of Elections officials moved more than 200 polling sites this primary.” Biden was declared the winner of the Illinois Democratic primary.