Take a Break from the Theory, and Practice

UChicago’s emphasis on theory over practice, especially when it comes to the arts, deprives many students of a crucial creative outlet. 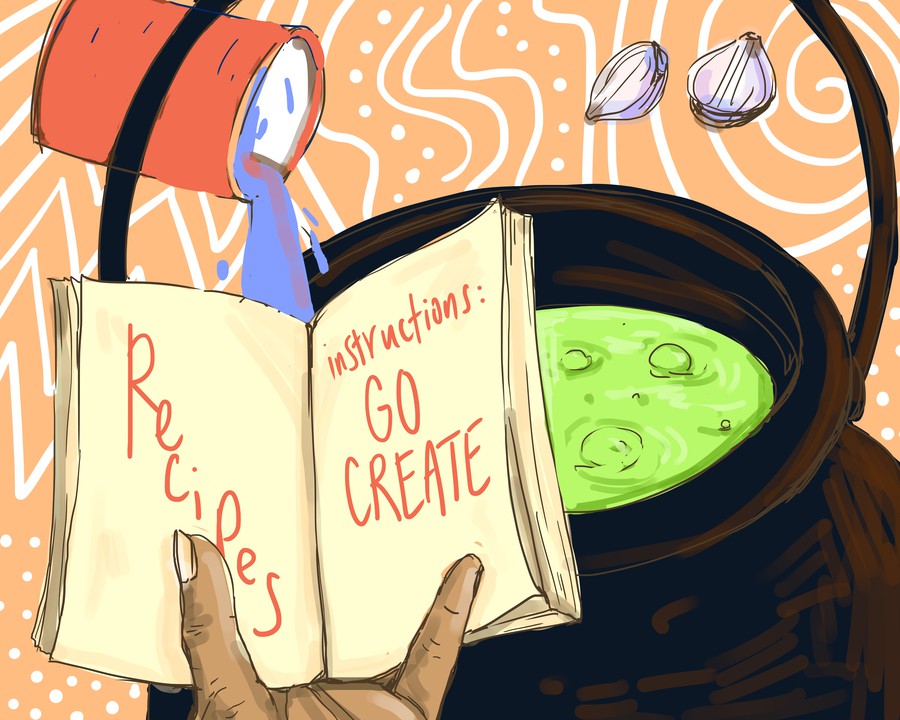 When was the last time you made something? Something physical, something real? Probably not in class: UChicago’s focus on theory relegates the practice of making to RSOs and arts majors, forcing most of us to go outside of school to make things. I made dinner last night. And the night before. But I don’t feel like that counts. I didn’t choose to make dinner; I needed to. While I was chopping onions and waiting for my rice to cook, I wasn’t thinking that I was in the process of creating something. I was executing a task. I chose to make a stir fry and so there I was, pushing vegetables around a frying pan, listening to a podcast. I was on autopilot, concentrating neither on my stir fry nor on the disembodied voice talking about basketball. So maybe I asked the wrong question. When was the last time you created something?

Creation requires imagination. You make dinner; you create a new recipe. Creation is personal. Both you and I can make the same piece of Ikea furniture, but we can’t create the same sculpture. Creation is often outsourced: to recipe books, to wikis and online tutorials, to Ikea catalogs, leaving us as biological bots, going through somebody else’s motions. Chop three onions, put a redstone torch here, drop stitch then purl, and remember not to put the shelves in backwards. Voila! You’ve made Emma’s best chilli, supergamerman77’s piston door, Oliver’s neon earflap hat, and Ikea’s best-selling shelving unit Billy. I’ve made the same thing too: My secret Minecraft base opens the same way and my SOSC books are on the same shelves. Maybe your chilli has more jalapeños and your hat is red, but in the end, we made someone else’s creation, followed the steps of someone else’s plan.

When we create, we manifest ourselves. That clay sculpture of a sea monster on my dresser at home: that’s me or at least a part of me. But more of me is in the painting I spent weeks on in a middle school art class and even more of me is in that angsty poem I labored over in high school. This process is, I think, fundamentally enjoyable. The more intent, the more imagination, embedded in our creations, the more of us is in them and the harder they are to create. Making great art is a taxing, laborious process, a struggle to create magic, a struggle for perfection, and often we judge all art against the standards of great art, even art that has no pretensions to being great. The fear of being judged in this way, by ourselves or others, can stop us from creating, but I don’t think it should. Just as we understand that the pancakes we make with our friends aren’t going to be restaurant standard, we should understand that the album our friend made or the poem we wrote were created in the spirit of fun. We need to overcome our own biases about art. We need to practice making art for fun.

This school teaches us that artistic expression is childish or that it’s a job. Classes are dominated by analysis; creation is relegated to the arts core or sequestered far away from the quad in Logan. The University’s emphasis on theory over practice contributes to this. Arts core classes are considered easy; many of them don’t even require you to create, just to write more essays or memorize snippets of Beethoven and facts about Degas. There’s a professional theater on campus, but how many people go to the plays or even know what’s playing? How many of the interminable emails from the University mention student art? The University just doesn’t seem to care, unless you are a major in a creative field, in which case you are looking for a job and will be bombarded with emails accordingly. You can devote your life to art, but if you don’t you should still create; it’s not just something for children or professionals. The problem is, we’ve all been persuaded that it is—that if you’re an adult, and your art isn’t beautiful, you simply shouldn’t bother.

We need to force ourselves to create, to allow our imagination to work its magic. Because our curricula are already so theoretical, I would encourage a more balanced diet of critical consumption and creation. Don’t only take those theoretical arts classes; try taking ones with creative assignments like On Images or Intro to Genres. The University should offer more arts core classes with creative assignments. Students should be more encouraged to paint, write, make plays, make music. I believe there should be classes that fulfil the arts requirement where students learn an instrument and the basics of song writing. The University could also offer free music lessons, as money is no object. Taking classes like these is a way to force ourselves to create, by providing incentives which we respond to: grades. It seems like this should suck the fun out of art, should turn a joyful activity into yet another thing you get through on Sunday evening. But by being more encouraged to create, we might make it a habit and even enjoy it.

Just as the University should force us to create, we should also force ourselves to create. Write poems, draw pictures, sing songs and all that. Create new recipes, try things out. Maybe that combination of chili powder and cinnamon doesn’t quite work, but you’ll certainly remember it. When you build snowmen, don’t stack three spheres, create something new. Despite all we are told, we can do magic and we should.

Andrew Farry is a second-year in the College.