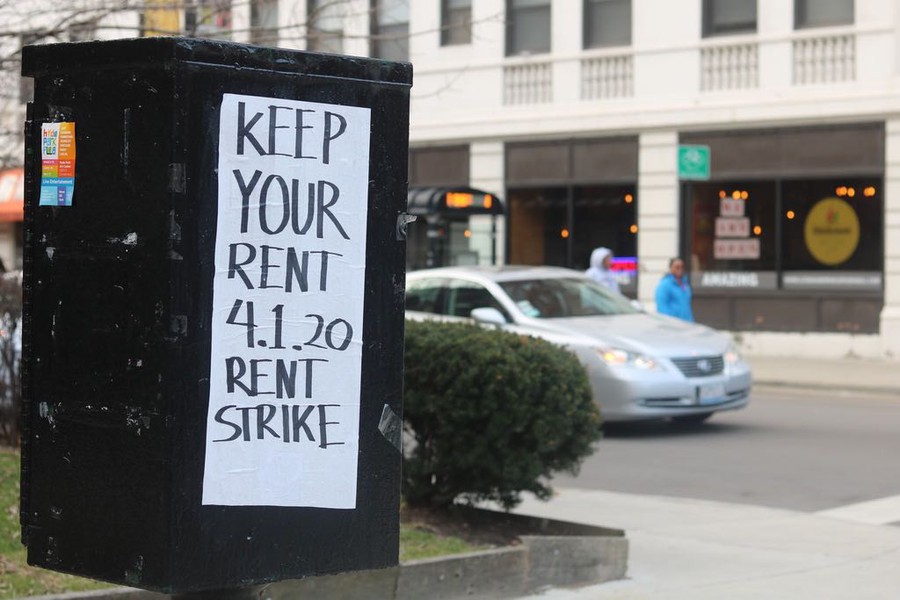 Poster advocating for a rent strike in Hyde Park.

Hyde Park residents—UChicago students among them—begin a rent strike April 1 in response to the economic difficulties imposed by the COVID-19 pandemic. According to the Hyde Park Herald, 32 tenants have pledged to go on strike.

The call for a rent strike is part of multiple movements across the country calling on governments to freeze rent payments amid job losses and other economic pressures caused by the COVID-19 crisis.

In a letter posted on Facebook, the newly-formed Mac Tenants United laid out their demands for action from Mac Properties, one of the largest property management groups in Hyde Park, in response to the financial pressures caused by the COVID-19 pandemic.

“We will be on rent strike starting April 1st, and will remain on strike until our demands are met,” the letter states. “We are coming together to fight for our common human right to dignified shelter and community; a human right which MAC treats as a commodity to be bought and sold at whim.”

The organizers are calling for Mac Properties to agree to halting evictions and canceling rent for the duration of the COVID-19 crisis as tenants have lost work due to Governor J. B. Pritzker’s stay-at-home order, now extended to the end of April. The group also demands that Mac Properties not retaliate against organizing tenants nor attempt to collect any unpaid rent before the resolution of the COVID-19 crisis. Tenants are further demanding a halt to annual rent increases beyond the local cost of living index.

Lauren Torian, a fourth-year in the College, is an organizer with Mac Tenants United. Torian, an Odyssey scholar, said that while she feels fortunate to have financial support from UChicago, she still encourages participating in the rent strike to stand in solidarity with people unable to pay rent for the foreseeable future due to a loss of income.

“It’s less about my personal finances and more about protecting the people I know will be seriously affected by this…. The reason I want to do a rent strike is not because I, physically, cannot pay rent, but because I know that there are people who are being unfairly charged money when they are physically unable to work due to something that is not their fault,” Torian said.

In response to the growing calls for a rent strike on various social media platforms, Mac Properties sent out an email to residents urging them to pay their rent while stating they will work directly with individual tenants if paying rent poses a financial problem.

Peter Cassel, director of community development for Mac Properties, later told The Maroon that the apartment management group will not negotiate with any collective tenant organizations and will only work with renters on a case-by-case basis following regulations set by the state and local governments.

However, some residents are wary of the individual approach Mac Properties is taking to this situation, calling it “unaccountable.” One fourth-year student in the College organizing with Mac Tenants United, who wishes to remain anonymous, said she wants to see more collective action to hold Mac Properties accountable.

“We don’t want the individual treatment that is completely private and unaccountable. I don’t believe that I have to divulge that I am disabled in order for them to not kick me out,” the student said.

Jonathan Friedman, a fourth-year in the College, wishes to see more communication about the risks and potential consequences of the rent strike. He feels tenants’ organizations have not provided educational resources directed at students who are at risk of putting their credit, and that of their lease co-signers, at jeopardy if they are served with an eviction notice.

Torian acknowledges the risks but still feels that with increased numbers of rent strike participants those risks can be mitigated.

“Of course there are inherent risks to a strike like this, but they are minimized the more people who are involved…. For me those are risks that are worth being taken, particularly if we succeed. If we succeed in getting a full rent freeze, then whatever risk I could have taken would have been worth it for helping people who needed me to help them,” Torian said.

Aaron Krolik, a lawyer who has represented landlords and tenants throughout his 16-year practice, told The Maroonthat eviction is a very real possibility for participants of the rent strike.

“It doesn’t work because the landlord has a right to rent while you live there under the Chicago RLTO [Residential Landlord and Tenant Ordinance], and nobody doesn’t pay rent while you’re living there, absent a court order. Period.” Krolik said.

Krolik also warned that landlords can take legal action for back rent not paid during the strike. “I don’t want people to think that it’s free. This rent strike is not a rent moratorium,” he said.

Cassel did not directly say if Mac Properties will pursue legal action against tenants participating in the rent strike but instead said they encourage tenants to work individually with their employees on a solution to rent troubles.

“We will continue to not file for eviction against residents who are working with us to solve whatever the problems may be. Filing for eviction represents a breakdown in the communication where we’re forced to go to a third party to solve this,” Cassel said.

In any case, evictions will not be processed in Cook County until at least May 18. According to an announcementTimothy C. Evans, Chief Judge of the Circuit Court of Cook County, extended the postponement of many non-immediate cases, thus suspending evictions and foreclosures until May.