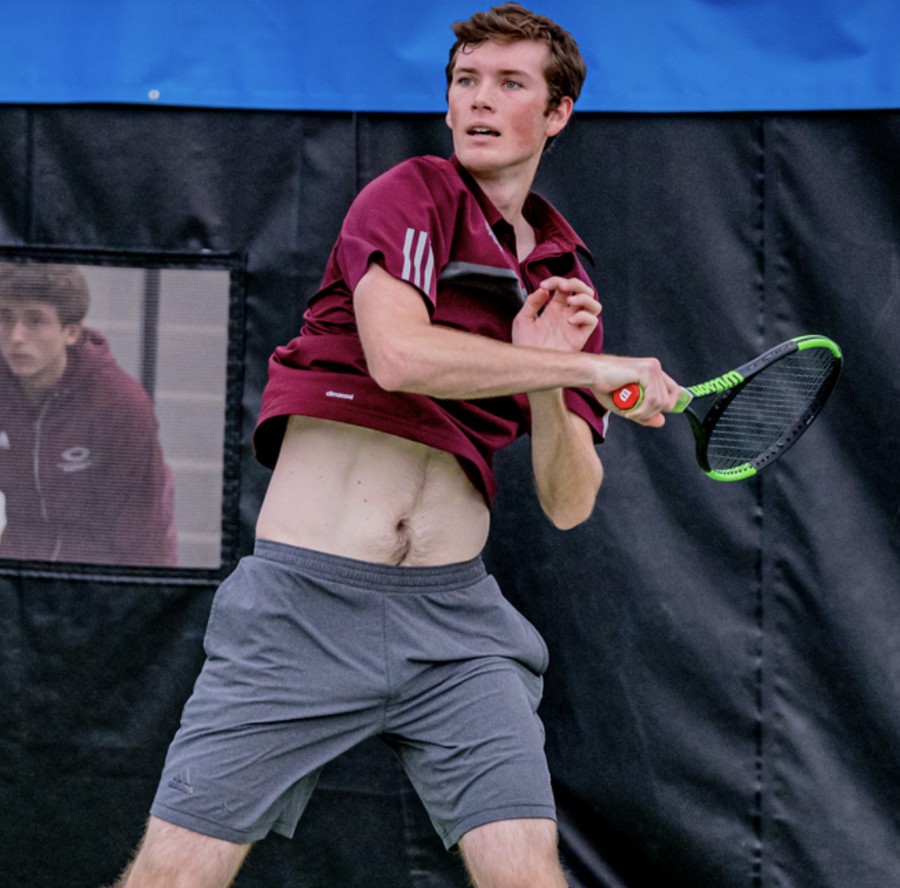 Erik Kerrigan admires his volley during an indoor match earlier this year.

Fourth-year Erik Kerrigan has spent a lifetime on the tennis court. While Kerrigan is an accomplished athlete, cinching records, playing in national tournaments, and dominating in intramural sports on behalf of his house, he has a unique zeal for the community of tennis. Kerrigan is quick to praise his teammates before himself.

Kerrigan was born into tennis. His mother is a tennis coach, and he picked up his first racket around the age of four. Throughout his youth, he played tennis on a daily basis year-round, developing a passion for the sport. After playing for his public high school’s team freshman year, Kerrigan decided to transfer to Austin Tennis Academy College Preparatory. This move encouraged a dynamic routine for intensive tennis in a small student body. In this environment, he thrived both on and off the court. After spending extensive time honing his skills, he climbed the junior ranks, competing in states and national tournaments in his junior and senior years. He completed his high school career by winning doubles at the Texas Grand Slam tournament.

Seeking a school with versatility between student academics and athlete lifestyle, Kerrigan gravitated toward the DIII model. He visited a series of small liberal arts colleges and universities before settling on UChicago. “It was a no brainer for me; a lot of little things added up,” he explained. “I enjoyed being around the people on the team and liked that it was a strong academic school in a big city.”

Kerrigan described his first college season as a “wake- up call.” After competing and practicing in an extreme local model, he was new to a team of stellar players from around the country. After starting his freshman season, Kerrigan was determined to train hard, putting the time in to rise in the ranks. He started at line six of singles and line three of doubles, working his way through the season. After finding his footing at UChicago, he began to play at lines two and three of singles and line one of doubles. He concluded his first season with a bid to the national tournament for doubles with current fourth-year Ninan Kumar.

Kerrigan’s tennis career is seemingly defined by an individual drive to excel and dominate. His progression following his first-year saw him at line one of singles and doubles, returning to nationals, and playing on a nationally-winning indoor team in the winter of 2019. However, Kerrigan’s most impressive trait is not his success. His attentiveness to his team and tennis community makes Kerrigan an exemplary athlete. His victories are based on accomplishments for his team and his let downs are when he feels he’s failed his team.

College tennis is a loud, celebratory sport, and Kerrigan is among his team’s’ loudest. His team notes that he is always eager to cheer on teammates and celebrate their successes. He champions a style of tennis that catalyzes a community and collective goals. “Everybody supports each other. If you’re struggling, the other guys are there to help and pick you up,” he noted. “I am proud that I was part of a team that has made a lasting impact on the program by creating a team culture.”

“Erik was an amazing teammate and doubles partner. As a teammate, he always kept you accountable and made sure you were always on the right track. As a doubles parter, he was like a player and coach bundled together; he always knew what the right strategy was and showed you how to execute by example,” said doubles partner and fellow fourth-year Jeremy Yuan.

Kerrigan’s college tennis career was cut short when the NCAA ended all varsity athletics due to the growing COVID-19 pandemic. His team was preparing to play its toughest competition of the season and gaining its footing and form. “It was unfortunate to hear that I wasn’t going to be able to finish my senior season. I thought the team was doing better and on track for something great,” Kerrigan reflected. “I’ve come to think it’s okay—at the end of it all, I kept playing to be there with the guys on the team.”

Kerrigan, a psychology major, hopes to pursue psychology research work following  graduation. He’s interested in getting a research lab position to confirm his intellectual passion for the subject before pursuing a Ph.D. For now, Kerrigan has some interest in staying at UChicago through the Master of Arts Program in the Humanities. Considering continuing his tennis career, Kerrigan explained, “I’m happy to hang up the rackets for now; any tennis I play will be going out with a friend or two and messing around. If I have time, I plan to keep teaching tennis. I can keep that connection to tennis and engage with kids who want to learn it.”