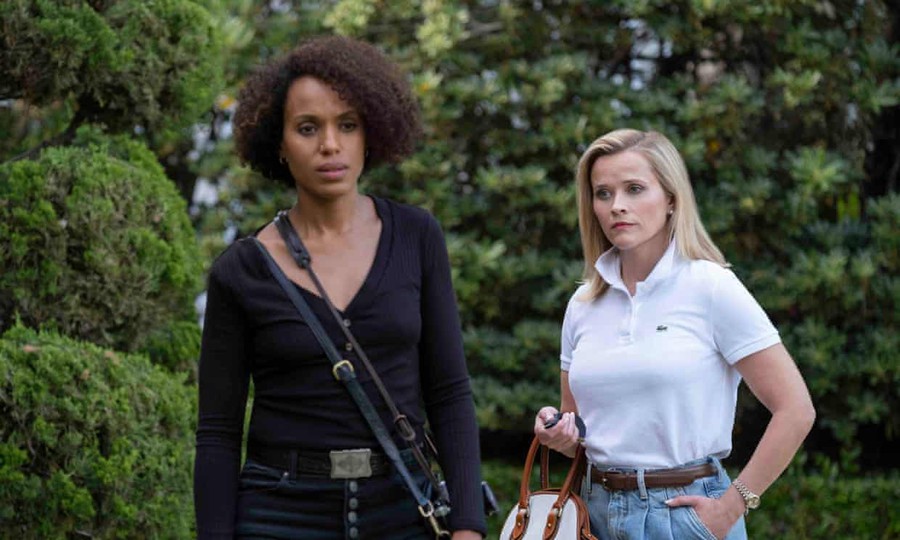 Reese Witherspoon is a woman with the self-appointed mission to ‘fix’—a mission that is occasionally well-intentioned, occasionally self-serving, and difficult to discern when the two diverge. At least, this is the persona Witherspoon has cultivated on screen.

Ever since she portrayed aspiring student body president Tracy Flick in Election (1999), Witherspoon has embraced the role of problem solver: characters with defined goals and an even greater commitment to achieve said goals. She specializes in women whose unbridled ambition elicits pity and disgust, support and unease. In Hulu’s new limited series, Little Fires Everywhere, adapted from Celeste Ng’s book of the same name, Witherspoon once again returns to this fertile ground as Elena Richardson.

Elena is the queen bee of Shaker Heights: the woman who ensures the neighbor’s grass prescribes to regulations, and the mother who organizes her children’s schedules in a color-coded calendar. She prides herself on tolerance, both her suburb’s and her own—as she takes pains to point out, her eldest daughter has an African-American boyfriend. With seeming happiness, Elena shuffles between book clubs, PTA events, and her job as a part-time journalist.

Yet the arrival of Mia (Kerry Washington), an artist and the black single mother of Pearl (Lexi Underwood), threatens to upend the facade of perfection Elena projects. Mia settles down in a rental duplex blocks away from the Richardsons’ palatial home, and, predictably, the two mothers find themselves on a collision course. The alluring bohemianism and fierce independence of Mia resonates with Elena. Driven by liberal guilt, Elena soon invites Mia to serve as her “house-manager.”

Behind this family melodrama lies a central mystery. The opening scenes reveal that the Richardsons’ house was set on fire, with Elena still inside. The mystery relies on the unknown perpetrator, although the suspects are quickly narrowed to Mia and Izzy, Elena’s deeply unhappy youngest daughter. The rest of the limited series then unravels the mystery in flashback, showcasing how Pearl and Izzy gradually replicate the dynamics between their mothers.

The pairing of Witherspoon as overbearing, self-fashioned savior Elena and Washington as secretive, indignant Mia proves plenty of combustible fodder for the show to live up to its title. The actresses make for exceptional sparring partners, each suppressing flickers of pain beneath their commitment to poise, and the series provides much material—some convincing, others less so—to force the women into opposition.

Washington imbues Mia’s guarded nature with a real warmth, adding an interesting variation to the actress’s well-known strengths. Conversely, Elena can often feel like a reprise of Witherspoon’s other roles, Tracy Flick or, more recently, Big Little Lies’s Monterey-mommy ringleader Madeline. The plot, though, certainly carves out moments for Witherspoon to showcase her acting chops. (Witherspoon and Washington both served as producers on the show, so the splashy acting moments are par for the course). The storytelling is widely imbalanced, aligning far more closely with Mia’s victimhood, but the high point of the series occurs in a scene near the end of the second episode, when Mia and Elena broker an uncertain peace that allows them both to profess their desires.

At its best when it examines motherhood and the privilege of choice, the show finds itself unnecessarily distracted by side plots that stretch the viewers’ disbelief and weigh down character dynamics with hefty themes. Most glaring is an adoption case involving Mia’s coworker and Elena’s friend. In this face-off, Mia and Elena’s respective decisions strike the viewer as inconsistent at best and illogical at worst. Throughout its slow burn, the show continually pushes Elena towards a more obvious villainy. The idea of examining motherhood through the lens of racial appropriation and suburban conformity is an intriguing one, yet the show often treats these as disparate elements.

For all of you hoping that this is a reprise of Big Little Lies (the first season, of course), I hate to disappoint you—Little Fires Everywhere suffers from that inevitable comparison. It fails to reach the same magnificent heights as its HBO predecessor, often buckling under its own weight. Although it still manages to tell a compelling story, the show suffers from a tonal seriousness and misuse of Witherspoon’s acting abilities.

The ensemble proves more than capable of supporting various storylines, with particularly noteworthy work from Rosemarie Dewitt starring as Elena’s friend Linda. While it remains to be seen whether the show can wrangle all of its storylines—ones surrounding race, socioeconomic status, sexuality, and immigration—into a satisfying conclusion, it has already displayed a commendable ability to explore varying facets of motherhood. Far from achieving the transcendence of its thematic predecessor, Little Fires Everywhere is an absorbing, well-acted melodrama in its own right.