A Ringing Endorsement of "Ripple Effects" 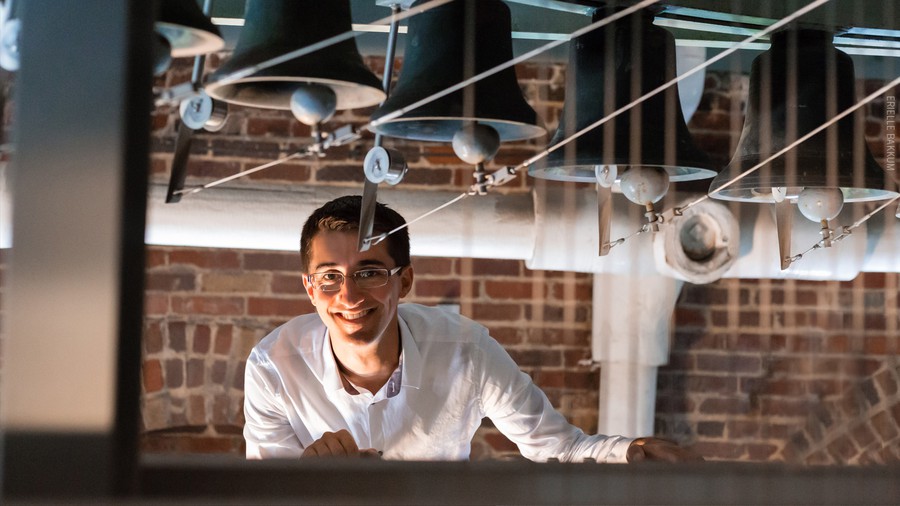 You might have heard the hourly chimes on campus, but the bells in Rockefeller Memorial Chapel play more than just the time. Ripple Effects is a collection of 17 tracks performed on the University’s carillon. Five of the tracks were recorded live at the Rockefeller Carillon New Music Festival in May 2018, and after two years of work with five different composers, a cellist, trombonist, and at least 18 carillonneurs, the album is a staple of the modern potential this medieval instrument has to offer.

Ripple Effects was released by Joey Brink, the sixth University of Chicago Carillonneur, in collaboration with several composers, including Grammy winner Augusta Read Thomas. “This CD really represented a lot of ways to collaborate with other people,” Brink told The Maroon.

The album was put together in commemoration of the former Dean of the Chapel, Elizabeth Davenport. The composer of the titular piece, professor Augusta Read Thomas, remarks in the album booklet: “The title Ripple Effects hopefully captures the potency and influence of Elizabeth’s magnificent life-force, efforts, leadership, and positive energy.” Davenport was celebrated for expanding the reach of Rockefeller beyond a purely religious embrace, pushing the boundaries of spirituality and engagement at the University of Chicago.

Like Davenport’s impact on Rockefeller, Ripple Effects pushes the bounds of what people view the carillon to be capable of. Brink hopes for “the album to reach a non-UChicago audience,” and the carefully arranged pieces might just ring a bell for people of all music tastes.

Something that makes Ripple Effects so unique is that it is performed on the Rockefeller Carillon, the second largest carillon instrument in the world. “My favorite thing about our instrument…is that the lowest, say, 20 bells—are so rich and so resonant and so powerful,” Brink described. “A lot of pieces on the CD have low note clusters on them…. They sound really good on our carillon, there is so much color, and I like them.”

Brink explained that when designing the album, he wanted to “[collaborate] with more people and [get] as much variety as [he] could, not just with the type of music…but also the variety of performers in age and gender and life path.” The tracks tell stories about everything from the birth of Brink’s daughter to the birth of the atomic bomb. The pieces take inspiration from a series of French paintings, the destruction of Rockefeller tower, and a song from an undergraduate carillonneur to her friend.

The album was recorded over several months after the festival. Four microphones were placed inside the tower to capture the detailed and nuanced notes of the smaller bells, and two microphones were placed outside of the tower to simulate the listener’s experience. “90 percent of the takes that we do are going to be interrupted by a bus or a siren,” Brink said. “It takes about an hour to record five minutes of music…. It’s really challenging.” But sometimes the sounds of the campus worked to the advantage of the album. “I really like having birds in the recordings.”

The titular piece emulates the motion of a ripple, as a simple duet grows with the addition of more players. The final massive cluster chord brings together 18 musicians into a final and triumphant ring of all 72 bells in the Laura Spelman Rockefeller Carillon. The largest of the bells, Big Laura, weighs 18.5 tons and can vibrate for up to 30 seconds; her ring can be heard from over a mile away, demonstrating that the carillon’s music resonates across the entire community surrounding the tower.

“A real goal of mine in making the CD and getting it out there is to show that the carillon is a contemporary instrument…that is capable of playing all sorts of genres as a solo instrument, as a duet, or with 18 players,” Brink said. The CD includes three tracks layered with electro-acoustic sounds as well as synthetic instrumental tracks, all of which were projected from the Rockefeller tower, bringing a modern touch to a traditional instrument.

The carillon is not only an instrument, but it is also a home to many musicians, including UChicago students. Brink explained: “Teaching the students and leading the guild is really the highlight of my experience as the University of Chicago Carillonneur…that’s what I love most about my job.” Something designed as a solo instrument has become a beacon to students on campus and listeners in the Hyde Park area.

As we’re away from campus, Rockefeller stays with us in the form of Ripple Effects. “Something nice about the album is that when you’re listening to it and you’re hearing the carillon and you’re hearing the outdoor noises of the birds and the wind and insects and sometimes cars or honks…you’re hearing the soundscape of the campus, and it’s actually a nice thing,” Brink said. “It feels like you’re back on campus…and that’s my hope right now…that people can listen to it and feel like they’re still part of the UChicago community.”

Ripple Effects is available for streaming on Apple Music, Amazon Music, and Spotify.