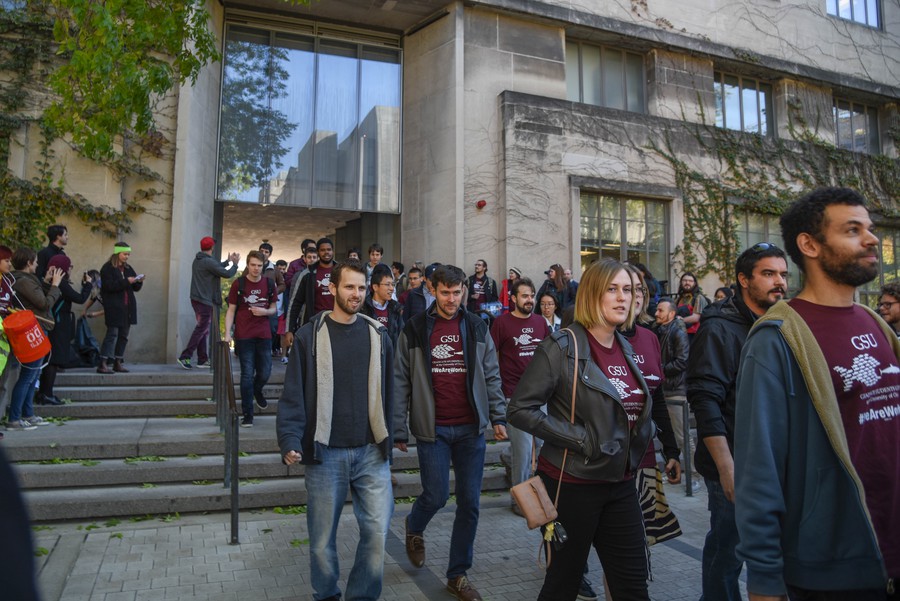 On April 17, Graduate Students United (GSU) released a petition demanding relief measures for graduate students, prompted by the challenges COVID-19 poses to graduate research and teaching. The union demands a one-year extension of time-to-degree that includes all program deadlines and increased funding for Ph.D. candidates. GSU is also demanding protection and relief measures, such as extended health insurance, a $4,000 relief grant for all graduate students, and visa protections for international students. As of April 21, the petition had garnered 181 signatures on the online document.

The Maroon spoke to Claudio Gonzáles, a Ph.D. student in mathematics, and Uday Jain, a Ph.D. candidate for the Committee on Social Thought. According to Jain, who represents the Social Sciences Division for GSU, extensions are necessary to account for halts in research.

“Nothing is moving right now because of these lockdowns and quarantine imposed by corona. Labs are closed, archives are closed, libraries are closed… There’s basically no conditions for research at all,” Jain said.

Many of the protections demanded in GSU’s petition are similar to the workers’ rights GSU has demanded for the past three years. “The demands that we’re making in the petition are quite minimal and they’re part of a national demand that many faculty organizations and academic associations have called for,” Jain said.

In an email to The Maroon, University spokesperson Gerald McSwiggan said, “As a result of the profound economic impact of COVID-19, the University has asked every academic and administrative unit to make significant adjustments in expenditures. These significant steps will help ensure that resources for graduate education remain in place.”

As for degree extensions, “Individual programs are free, under the guidance of their Deans, to adjust internal deadlines, such as qualifying papers and exams, as appropriate,” McSwiggan said.

GSU also sought a guarantee from the University that no graduate student would be forced to drop out of their degree program during the coronavirus crisis. This demand was included in response to the University’s 2019 funding overhaul in the Social Sciences and Humanities Divisions, the School of Social Service Administration, and the Divinity School.

Regarding the overhaul, the University wrote to The Maroon, “UChicago’s new doctoral funding model will fund eligible students for the duration of their programs, providing additional flexibility for programs to address individual students’ situations.”

However, according to Jain, the overhaul included enrollment caps, which pushed many Ph.D. candidates to defend early or, if unable to do so, drop out. Jain worries the limitations of quarantine could exacerbate this challenge.

“Corona couldn’t come at a worse time,” Jain said. “Because of this funding overhaul, a lot of advanced-year graduate students who have put in hours and years of their own work to the University are in a very precarious place.”

Jain and Gonzáles characterized the near future for graduate students as “uncertain.” In an interview with the Maroon on the 21st, Jain and Gonzalez also said that that graduate students have received no policy response or guidance regarding summer jobs and funding, other than university-wide emails.

However, University spokesperson Gerald McSwiggan wrote that all funds will be maintained. “As Provost Ka Yee C. Lee stated in an April 21 email, ‘we will honor our commitments of financial support for students.’ Graduate students who were eligible for funds prior to COVID-19, and who satisfy their program’s requirements for summer funding, will continue to receive that funding."

Gonzáles, who organizes for GSU, used this uncertainty to highlight the need for the University's recognition of GSU. “Instead of trying to read between the lines of these [university-wide] emails…we need to recognize union people, we need to sit at the table and hammer it out.”

“I think there’s a big opportunity here to really push for democratic governance of the university,” Jain said. He believes that any progress on GSU’s most recent petition, as well as their demands at large for rights and recognition, “depends very heavily on the organizing that we do right now.”

“In 2017 we started the union drive because, fundamentally, graduate workers do the work at the University of Chicago. We’re the backbone of the institution, it does not run without us,” Gonzáles said.

“We deserve a seat at the table when decisions are made that impact our lives.... It's even more true right now, in this time of crisis,” Jain said.

Article has been corrected to reflect that University administration provided an update on the status of graduate funding on April 21st.