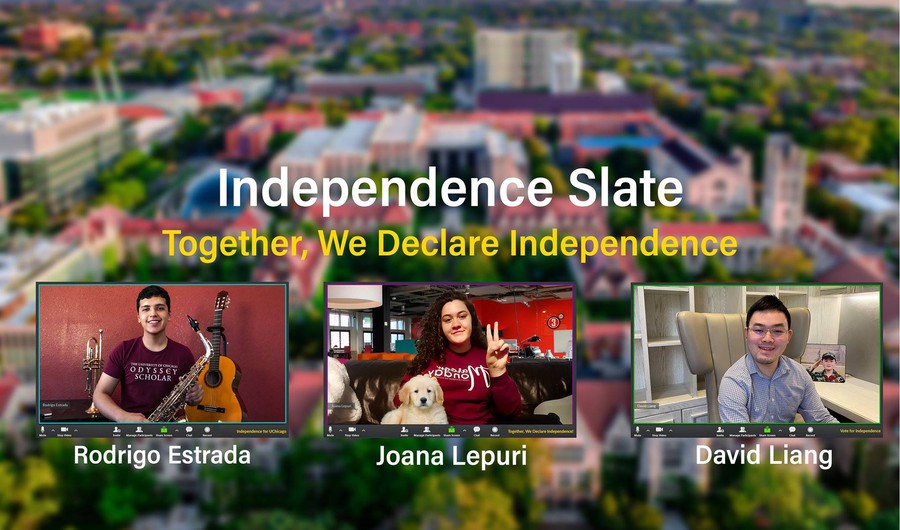 The three candidates will run as a group, per Student Government protocol for executive slates.

The flagship policy for the Independence Slate is an independent Student Government, which they say would be achieved by establishing a 501(c)(3) nonprofit and then negotiating a Memorandum of Understanding, a formal agreement between organizations to establish official partnerships, with the administration.

“One thing you’ll notice about our positions is that each of them are intertwined with the concept of independence and the very premise of each of these issues is that with independence we can, in almost every case, achieve more than the current status quo,” Lepuri told The Maroon.

“We figured that there is one way to make our system more efficient and much more representative of student voices, and that is through independence,” Liang said.

To achieve this independence, Liang told The Maroon that there will be consultations with the student body and its organizations.

“We’ll then create a very detailed and comprehensive plan that will be put to a vote, hopefully in the winter quarter, as a referendum for the student body,” he said.

Currently, the University collects the student life fee, which goes toward funding RSOs and other student-led initiatives. With an independent Student Government, “[the University] will transfer that money one-off to the designated bank account of the student government,” Liang told The Maroon. This is subject to the Memorandum of Understanding.

On the COVID-19 Pandemic

The Independence Slate wants to use the remaining student life fees, a third of the roughly $2.4 million pool of money, to help students hit the hardest by the pandemic. However, accessing this money is premised on achieving independence, which wouldn’t happen until a referendum during winter quarter next year.

Liang told The Maroon that to get the money to the right people, “the most sensible way is to listen to the students and the student organizations that are advocating for students who need financial assistance. We’d listen to them and identify the most vulnerable group of students and directly help them.”

“Right now it’s our money but we can’t access that because we lack legal, operational, and financial independence from the University,” Liang said.

The slate is in favor of expanding mental health resources and funding on campus. Their main initiative is a Centralized Academic Planning Office.

“It is an office that would be staffed not with academic faculty, but with mental health wellness professionals whose whole job is to provide a very quick evaluation of a student’s mental health needs,” Liang explained. “They will give you accommodations that are academically binding to the University. For example, for extensions and moving exams, the faculty will have to be bound to that decision.”

The slate also supported a “Life for the Mind” fund, which the administration has said it will pilot in the coming fall quarter.

“We are the students affected by mental health problems, so we are the ones who can most quickly identify what kind of solutions are most urgently needed,” said Liang. “We want the University to tap into that creativity of the student body in order to build a solution that is inclusive of everybody.”

On the University of Chicago Police Department (UCPD)

The cornerstone of the Independence Slate’s policy on UCPD is budgetary transparency and greater funding for mental health resources.

“Far too often, police officers are called to act as mental health officers as well in dire situations and that is completely egregious because it should actually be mental health professionals who are diffusing and intervening in these very sensitive situations,” Estrada said.

“I think a big part of UCPD, about mental health, about the University in general, is a lack of budgetary transparency, Liang said. “We want to know how much money the University spends on UCPD.”

“We support survivors, and we want to support them in any way, shape, or form, whether that be to help let the University community be aware of the issues that are hurting survivors most,” Lepuri told The Maroon. “That includes publishing, hopefully yearly, data using independent research groups “

In addition to publishing more data, the slate wants to ensure increased accessibility of Title IX offices and continued funding for organizations like the Phoenix Survivors Alliance, Resources for Sexual Violence Prevention, and the Sexual Assault Awareness and Prevention Committee.

The slate also wants to institute a student advocate office, modeled on the one at UC Berkeley, to provide support for sexual assault survivors.

“This is a general office position that has to do with any aid—legal or just seeking information—for a student that has any kind of grievance or dispute with the University. This includes, in particular, aid for sexual assault survivors after they have been assaulted and help them get access to legal aid,” Lepuri explained.

Supporting graduate student unionization is a consensus among all the slates. With their independent status, the Independence Slate wants to vocalize that support and also provide financial assistance.

“Our position is to mobilize and help them with their interest to the best of our abilities—in particular, helping to reiterate that their financial wellbeing is really linked to the quality of the education that college students receive,” Lepuri said.

“With an independent 501(c)(3) nonprofit, we can use our money to show support and solidarity with our graduate workers in their fight for graduate unionization,” Liang said.

“We want to make sure, in alignment with our goal of independence, that long-term efforts that the University attempts are more ambitious,” Lepuri said.

“We’re here to establish an institutional check on the administration that will constantly bring up those pertinent ideas and longtime struggles from GSU to the commitment to sustainability by 2030. These long term goals have to be overseen by a long term body like an independent Student Government,” Liang added.

The Independence Slate believes that recognition of Greek life by the administration is inevitable. The extent of the regulation that follows, however, would be dependent on the findings of research they will conduct.

“It’s a very complicated matter. It’s very nuanced, and requires studying. I promise you that we will have that study published by the end of this quarter where we’re going to review all of the models around the country and see to what extent that kind of regulation should be,” Liang explained.

On Community and Inclusivity

The slate told The Maroon it fully commits to supporting student-led initiatives that build community both on campus and in the surrounding neighborhoods.

“For many students, meaningful connections are made serving the community and trying to build and repair that trust that the University hasn’t done historically with our neighbors,” Estrada said.

Independence also wants to establish a diversity and inclusion board for their slate. “We believe that student leadership should actually look like the students that we serve and we’re very much committed to diversity and we want to hear from groups on campus that are already doing amazing work,” Estrada said.