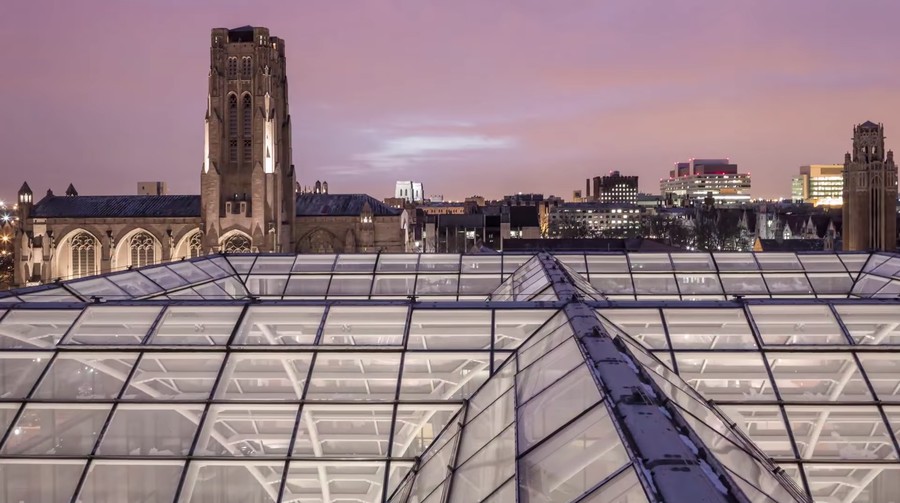 The roof of the Harper Center, which houses the Booth School of Business

App ambassadors have become commonplace in recent years on college campuses nationwide; according to short-form video-sharing app TikTok’s website, the company employs “student reps” at 100 colleges in the United States. UChicago’s campus is home to ambassadors from TikTok, the dating and social networking app Bumble, and the rental car app Zipcar.

In recent months, TikTok ambassadors have hosted dance workshops, given away merchandise, and even bought coffee for 40 customers at Harper Cafe on behalf of the app. Bumble ambassadors also relied on in-person marketing strategies: hanging up promotional posters across campus, handing out Valentine’s Day cards and flowers, and handing out free donuts sponsored by Bumble.

But after UChicago’s shift to remote learning, second-year and Bumble ambassador Lynnette Jiang’s ambassadorship became exclusively digital. Her tasks for the month of April include posting promotional memes about Bumble on her social media profiles, filling out a questionnaire template about online dating on her Instagram story, and making TikTok videos about the dating app.

Jiang told The Maroon that although disseminating messages through online platforms has its perks, such as reaching a larger audience, she has found it difficult to amplify her message beyond her own circle of online followers.

“I can reach more people online in a few minutes with a post than I would in a day on campus. But, at the same time, I’m not reaching anyone new—only people that I already am friends with,” she said.

Remote communication has also limited Jiang’s ability to convey Bumble’s community-oriented dimensions, one of her primary goals as an ambassador.

“It was a lot easier to bring our community together when we were all there physically,” Jiang said. “[Having student ambassadors] is Bumble’s way of being like, ‘we’re not just an app, we’re also a culture and a community’…You need boots on the ground to do that.”

Jiang’s goal of community-building around the app is not unique to Bumble; a similar sentiment can be found in TikTok’s ambassador job posting from May 2019.

“We are NOT looking for someone to hand out flyers or swag at college events,” the posting reads. “We want a leader, entrepreneur and out-of-the-box thinker to help build a community of on-campus creators who will use the TikTok platform to express their passion and craft.” (UChicago TikTok ambassadors declined to comment for this article, as the company does not allow them to speak directly to the press.)

Booth School of Business Professor Pradeep Chintagunta explained the apps’ community-oriented strategy in an interview with The Maroon. App ambassadors, he said, do not simply serve to advertise the material quality, or “hard attributes,” of their products. Rather, he said, they were conveying their “soft attributes,” or the narrative crafted by a company to promote its product.

To a greater extent than past generations, young people’s consumption is influenced by the “story behind the brand,” Chintagunta said, and app ambassadors can convey these soft attributes more effectively than mass media advertising.

“In order to differentiate yourself in the marketplace, ultimately…the hard attributes are easy to imitate [by other companies]. It’s the softer attributes that are harder for companies to try and emulate other brands,” Chintagunta said. “Hearing it [a company’s message] from your own peers is maybe an easier way to be convinced about those attributes than hearing it from the company on television.

To Chintagunta, these companies’ use of student ambassadors is also a response to shifting patterns in media consumption, especially among the apps’ young target demographics.

“You now have a customer group which really is not paying that much attention to television,” he said. “There is a need, I think, to try and reach them through other means.”

When asked about the effect of COVID-19 on marketing strategies, Chintagunta said that the new social patterns caused by the virus may prompt companies to venture into alternative forms of advertising.

This may offer both challenges and opportunities for businesses. Prior to the outbreak, “a lot of brands were very reluctant to try some of the new media, largely because they were still so used to using the traditional media,” he said. “This gives them now a little bit of an opportunity to experiment.”