Purple Corporation’s debut EP is a tribute to their psychedelic rock roots, with an added undertone of electronica, or as they describe it, “psychedelectric.” 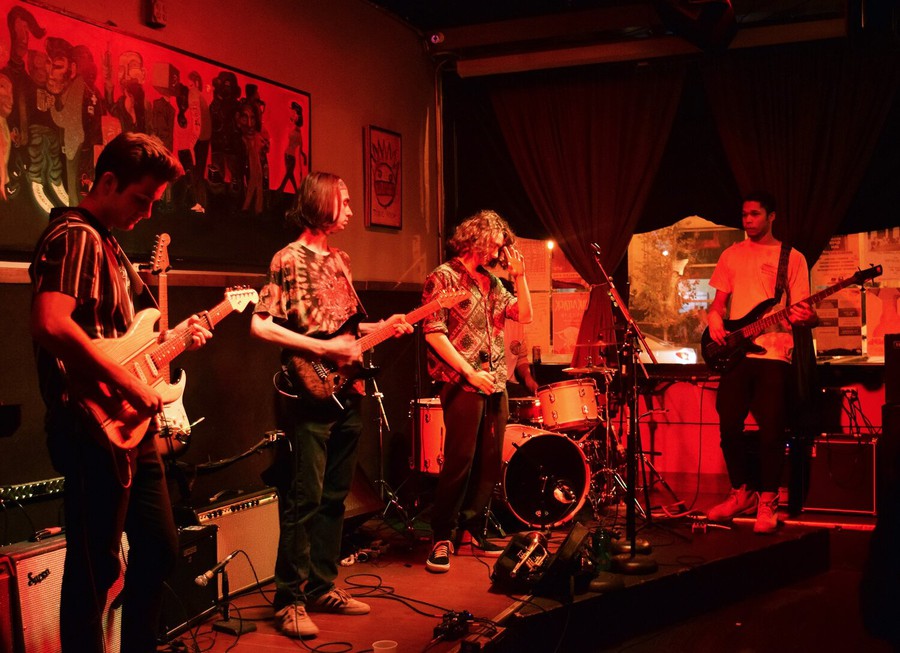 Listen to Purple Corporation's maiden EP - it's worth the "psychedelectric' ride.

With global lockdowns forcing me to stay inside and learn how to make stronger margaritas, it has only become more difficult to keep track of the current date and remember how I’ve spent the previous five weeks. But in an effort to get into the spirit of things, I recently listened through Purple Corporation’s newest project, the aptly titled Gaps in Time EP. In case you’re too young to remember Purple Corporation from the days Bar Night was sacrificed on the altar of Alpha Delt, the group began in 2018 as a musical duo between fourth-years Miles Donnelly and Matt Williams performing original songs at UChicago parties and Hyde Park venues. Now with two more members, drummer Sam Jacobson (A.B. ’21) and guitarist Nick Olosky (B.S. ’22), and a wider range of instruments, the group’s debut EP is a tribute to its psychedelic rock roots, with an added undertone of electronica, or as they describe it, “psychedelectric.”

One of Purple Corporation’s strengths has always been their level of energy when performing in front of a live audience, which they have certainly attempted to replicate in the EP. As Olosky remarked to The Maroon, “Gaps in Time is probably our best attempt at a live album, since it was recorded entirely within a single day.” This may be true to the band’s roots, but is somewhat of a double-edged sword—even with the “increased freedom provided by a studio,” as Jacobson said, it’s generally impossible for a studio recording to inspire the same emotion as that of a concert. Gaps in Time is no exception, especially on tracks such as “We Can No Longer Take It” and fan-favorite “Fish Out of Water.” The songs demand a bombed-out audience to wave lighters like signal flares, but the dramatic choruses tend to aim for a climax that doesn’t always feel earned. This may be partially due to the singing style changing as often as I go to the gym, which makes the EP feel a bit more one-note than was probably intended. Having unique vocal style is important, but without pushing for a range of emotional peaks, it turns the laid-back, wistful style into a trope.

While tropes can be useful for establishing consistency, the worst offense in Gaps in Time is the way in which the unchanging tone makes the lyrics even more reminiscent of Rupi Kaur poetry. The group purports to touch on subjects such as love, climate change, and the story of how we found our sound,” and may genuinely have done so. But because the lyrics are mainly bits of imagery and “sadboi” posturing, they’re difficult to relate to. It’s like if Herman Melville just wrote vague philosophical descriptions of humanity and nature in Moby Dick, rather than a jaunty tale about a whale and a sailor with a grudge. The complexity within lyrical work comes from the layers of theme and wordplay that engage the listener both on a surface level and in deeper considerations. If the majority of the writing is the deeper thoughts, it’s like serving us a layer cake but forgetting to add more than rich chocolate and a spoonful of frosting—definitely satisfying, but a bit too much to get through all at once.

Not that I want to sound down on Purple Corporation, though—going back to their strength in performance, the band’s soundscape and instrumentation very much comes alive on Gaps in Time. The band emphasizes that “the sound of each song on the EP is designed to carry a unique feeling,” which infuses the tracks with a range of sensory experiences. By and large, each song revolves around the lead guitar line and vocals, but the magic builds from these core elements with riffs and instrumental improvisation. The finale song, “Electrical Connection,” is perhaps the best example of this, and is certainly the song where every element clicked. There’s a sense of joyfulness running through the track’s vocals, and the solos provide an enjoyable musical exploration during the midpoint and denouement of the song which complements the vocals without feeling overwhelming.

Ultimately, the Gaps in Time EP is a short but sweet experience. With only six songs and 25 minutes of runtime, it throws both the highlights and the strains of Purple Corporation into sharper relief. If you’re a fan of the influences that the band draws upon, Gaps in Time will feel like slipping into a familiar sweater smelling of philosophy and Woodstock. Even if you’re not, Purple Corporation is worth checking out if you want a decent example of an indie college band beginning to shake off the trappings of its origins. Personally, after our interview, I’ll be interested to see their next project, which is set for a “tentative release in 2020” and an intent to “pulling on new sounds from house, hip-hop, and club while refining the lyrics.” I’m hopeful that Purple Corporation will sharpen its skills with time, or rather gaps in time (yes, I do think I’m hilarious).

Gaps in Time is available now on Spotify, Apple Music, and Bandcamp.