Our Student Government System Has Wilted

It’s time for an overhaul of elections at UChicago, and we must consider houses as a viable electoral unit. 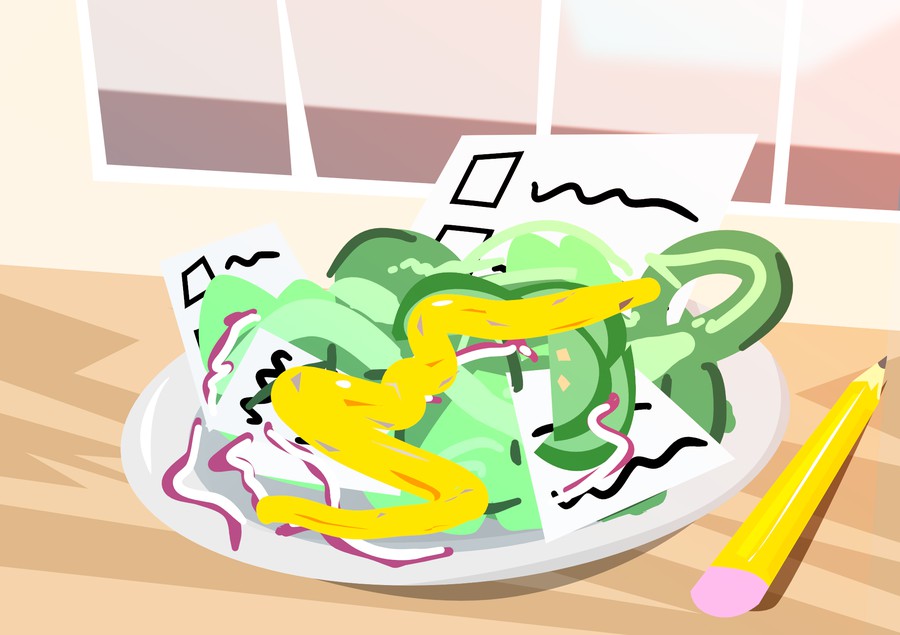 After three long years at the University of Chicago, I’ve finally come to the most important conclusion of my student career: Elections at the University of Chicago and the house salad at Shinju on 53rd are one and the same. In other words, you forget from the other times you’ve had it that, instead of being delicious and exciting, it’s always utterly disappointing and an absolute disgrace to house salads and elections everywhere.

What comes to mind when you think of a house salad on the menu of an establishment described on Google as a “casual spot for raw & cooked Japanese fare”? I, for one, immediately think of a lovely little bowl of salad greens, smothered in a generous helping of that oh-so-delicious orange ginger dressing. At the very least, I would accept anything remotely resembling “salad greens” and “dressing.” Shinju, however, has chosen to abuse my generosity and the culinary conscience of billions—their “house salad” is a bowl of shredded cabbage topped with spicy mayonnaise, and I eat it anyway like the filthy animal I am.

Now, what comes to mind when you think of an election at an academic institution described on Google as a school that “ranks among the world’s top ten universities”? I, for one, immediately think of a reasoned, intellectual debate on policy issues that matter to the student body. At the very least, I would accept anything remotely resembling “coherent thought” and “decorum.” The University of Chicago, however, has chosen to abuse my generosity and the political conscience of thousands of students—its “elections” are hollow excuses to make fun of and attack classmates, and I vote anyways like the filthy animal I am.

Unlike at Shinju though, where failing to finish your food is punishable by additional fees, our Student Government situation isn’t one without alternatives. Simply put, we don’t have to accept whatever it is that we call “elections” as a finality. We, as students, can change the toxic culture around Student Government and its elections, a situation that will persist so long as we allow it to.

It would be naïve to assume that just telling people to be nice would solve this problem. Just as there are people who think spicy mayonnaise is a dressing, there are also those who fervently believe that those opposed to them aren’t just wrong, but fundamentally bad. I’ve been on the receiving end of both misconceptions, and they are equally terrible.

It would also be wrong to assume that such behavior could be prevented by the Elections and Rules Committee. We can be as hopeful about Student Government as we want, but no matter how many water fountains they put in the Reg (one so far, with a plaque announcing that it was them who put it there), a Student Government committee cannot best human nature.

The reality of elections is that you can regulate some of what a campaign itself does, but you cannot feasibly regulate the behavior of the rest of the student body, especially when they go after students they don’t know. That “unknown” factor is extremely powerful here. It’s much easier to demean a profile picture than it is a person, a lesson on 21st-century human nature that we know all too well. Instead, rather than trying to change the rules to accomplish the Sisyphean task of getting people to be nice to each other, why don’t we try to change the game?

Changing the game, so to speak, would kill two birds with one stone, the second unfortunate pigeon being that, elections aside, Student Government itself is broken. Research from the Campus Policy Research Institute proved what we all already knew—that most students think Student Government does nothing. Even worse, most students don’t even know who their Class Representatives are, let alone believe that their Class Reps understand their issues. That’s right: The elected official who is supposed to know them best, according to students themselves, doesn’t even know what their constituents are dealing with.

What does changing the game consist of, then? In a few words, it’s about making elections familiar and relatable, done by changing the electoral unit from classes to houses. More precisely, rather than electing representatives from each class year, students would elect Student Government representatives from within their own house, the number differing based upon house size. For students who live off-campus such as myself, they would vote—if they choose to participate—as members of their first-year house.

Changing the electoral unit won’t get rid of the human fact that people can be mean to one another, but this minimizes that possibility to the fullest extent possible. It’s easy to tear into Joe Schmoe who lives all the way in Stony Island, but it’s a lot harder to say the same things to a housemate, a person whom you’ll run into at house meetings, in the lounge, at the dining halls, and on the quad as you walk back to your dorm.

Perhaps most importantly, that person, by virtue of being elected by their house—and thus someone who is active at their house meetings—knows exactly what the people they’re with really want from the greater, institutional body. This, in turn, would lead to more substantive debates come election time—fewer promises and more reality, as the participants would have an actual stake in what’s being spoken about. I wouldn’t be surprised if, as a result of these changes, we would also see a major increase in voter turnout.

Finally, these reforms call into question the necessity of a broadly elected executive slate, whose elections are usually the fiercest. And for what? To see who’s best equipped to promise the most and follow up the least? It would make more sense to have them elected from within the College Council, similar to how the College Council already elects a chair from its ranks. This change, to the best of our ability, would keep campaigns as realistic and grounded as possible, since no representative can be sure that they would be in an elevated position; after all, ambitious and challenging initiatives are best reserved for RSOs, whose structures allow for a greater capacity for institutional memory and quick action.

Is all of that even achievable? The answer, as history itself shows, is a confident yes. After digging through nearly every issue of The Chicago Maroon in the online archives, I was personally surprised at how much Student Government at the University of Chicago has changed throughout its over-a-century-long existence and how, just as quickly as each iteration came and went, its predecessors were forgotten.

Student Government at the University of Chicago has existed since at least the first issues of the The Chicago Maroon—then known as The Daily Maroon—in 1902. Throughout the 20th century, Student Government at the University of Chicago, like a phoenix, underwent a consistent pattern of death and rebirth. Its rebirth, often led by a small group of impassioned students and opposed by those who questioned the need for a student government in the first place, was always accompanied by changes to what constituted an electoral unit. Reformers were quite creative with what they fiddled with on that end. Iterations ranged from familiar class-based units to more creative ones, like majors, departments, and dormitories. Some might be startled to learn that in some of the earlier versions of dormitory-based electoral politics, fraternities were included.

Despite these changes, an astute observer could point out, student governments still figured out ways to die. This is a crucial argument to bring up—what would make any solution we propose long-lasting and effective? Our change would last because of our X factor: social media. Student governments in the past died because, as they focused on issues of lesser importance, The Maroon stopped covering them and people stopped voting. Now, with the internet, The Maroon no longer has the monopoly on information on campus; a tweet or Facebook post from a concerned student or Student Government itself can garner more reach than a reporting piece or even this Viewpoint.

The internet is a positive for the reformer, but also a clear negative; to be blunt, it has kept a dying Student Government on life support, when, in previous generations, it would have already been forcibly reformed. This puts the question of natural selection firmly into the hands of the student body, and it can be answered with another simple question: If Student Government disappeared tomorrow, would I notice anything? A few LinkedIn’s would be harmed, but for the rest of us, life at the University of Chicago would go on.

To the careerists upset by that last sentence, don’t take it as an insult. I’m sure there’s much glory in being able to say you made a new student government on your resume. I just wish I could say the same about being able to change Shinju’s house salad.

Matthew Pinna is a third-year in the College.