Ariel Salmon: Reflections on the Rise of Digital Media 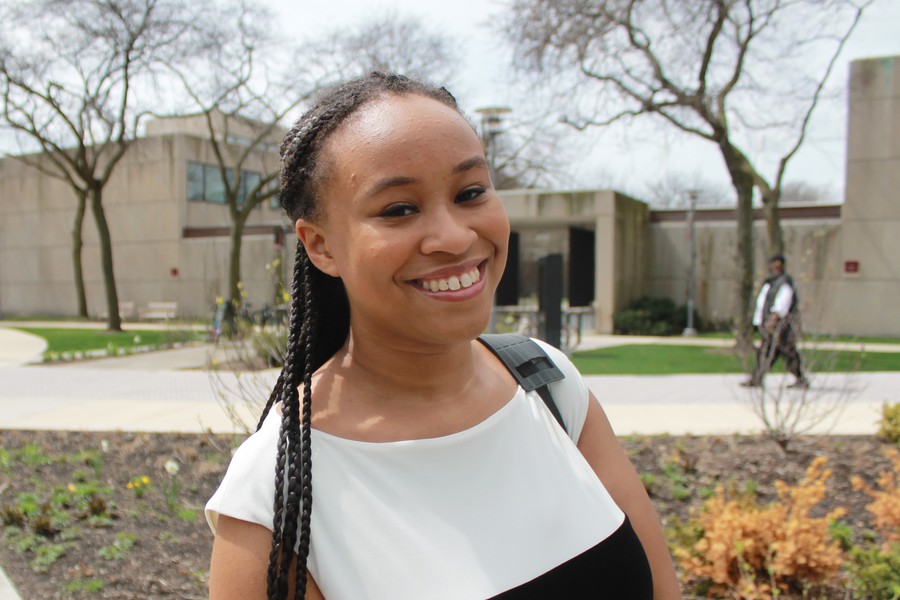 Ariel Salmon (A.B. '20) walks us through her thesis on Black Conservatism on social media, as well as her experience as Snell's virtual RA.

This article will run in the Maroon's graduation issue, which seniors will receive later this month.

It’s no easy feat to juggle academics and work responsibilities for any student under quarantine. For Ariel Salmon (A.B. ‘20), quarantine offered time to build on her B.A. thesis in the final steps to completion, but also demanded her flexibility in remodeling her role as a Resident Assistant for her house, Snell. Optimistic and persistent, Ariel emphasizes the importance of social media in our everyday lives, and sees it becoming more and more prominent given the chaos of the pandemic.

THE MAROON sat down with Ariel to discuss her thesis topic, the role of social media in politics and her everyday house culture, and advice for the UChicago community moving forward.

Chicago Maroon: Congrats on finishing your thesis for political science! I guess it’s been a wild ride for you. A lot of political science students have told me it’s been weird finishing their paper in their childhood bedrooms, where they wrote their UChicago application as high school seniors. Could you tell us more about the topic of your thesis, and how you navigated the process and realized you wanted to write about digital media?

I came to this because I was taking a class with my thesis adviser, Dr. Cathey Cohen, about African-American politics. We talked about every niche form of politics except for conservatism and I was like, “I wonder what they’re thinking about?” I’m not personally a Black conservative. I feel like that’s one of the top five questions that people would have when they hear me talk about my thesis. But, I was more interested to hear why they think what they think, because none of the Black people I know would even consider being conservative, for the most part.

But, I was originally planning on doing some in-person interviews, but that obviously that didn’t work out. [laughs] So without that planning working out, I ended up looking at social media.

CM: Tell me about the process of your social media search! Walk us through what kinds of posts you were looking for.

AS: The original plan was to go to two conferences and interview people in person. And then over the summer, I was looking into these conferences and I realized that one of them was probably not gonna happen because I could not find a date for it. The other one was a closed conference, so I had to pay, like, a thousand dollars to go. Or pretend I’m a student or something like that. Obviously, that isn’t going to work for me, so from there, I switched to social media and then I was thinking, “Well, I could look at post content, and I can see what sort of concerns people have in these groups.” I ended up posting surveys in five Black conservative Facebook groups. And from there, I found people to interview. I interviewed four people based on 11 surveys. Not a significant amount of data, but enough to make an exploratory, interesting study.

CM: Just speaking of these groups that you joined, what was the most interesting insight you got?

AS: I think the thing that I did not expect is…well, there’s an idea that Black conservatives are, like, less Black or something like that. But a lot of them used their Blackness as a reason for why they are conservative. They are looking for other options. They are frustrated with the Obama presidency, which wasn’t as successful as they were hoping. They thought that Obama hadn’t been as radical as they wanted him to be. Because of that, they were looking to Trump for some of them. Some of them were not interested in Trump, but were Republican as a result. There’s a pretty wide range of opinion[s] as well. Some people were pretty liberal socially, some were very socially conservative. Some people adored Trump, some hated him. But it was just interesting to get the opportunity to cop this group of people that I really normally would not have interacted with.

CM: Is there a part of your thesis where you felt like it was the best part you’ve written? That one enlightening moment?

AS: Oh, let me think about this one! I feel like the big takeaway from this thesis was that a lot of them had a sense of, “Hey, I’m a reasonable, thoughtful person.” Like, liberals decide based on their emotions, and as a conservative, they think they don’t do that. It was an interesting way to think about yourself, and the way you view things. We all think with our emotions to some extent. I think it was that sense of “I have to be reasonable” that meant that they weren’t using social media just to push people’s emotions and say, “Here’s why you should be more conservative, why you should think this, why you should think that.” Also, some had at least some disdain towards people who are actually convinced by social media posts—despite the fact that they were all learning from social media. They become conservative, join these groups, then think, “So here’s what I thought conservatism was, and here’s what it is now.” So, I guess everyone’s still learning from social media, but also tend[s] to look down on other people who are learning from social media. It felt a little ironic to see that people are not always aware of the things that influence them strongly.

CM: How did you finalize your thesis during quarantine? Is this when you thought of the title?

AS: Ha! I had a title, then I changed it for my last draft, and I did actually change it because of the quarantine! My preceptor was like, “This uses the same word five times. Change it.”

The process was super weird! I was able to sit down and really work on it hard for the first two weeks I was back, which was great. After that, my motivation dropped to zero. It’s been weird. I’m sitting here in my bedroom looking at my childhood bed. But I think we’ve made the best of it. It got turned in, hopefully with honors.

My thesis is called “A Blacker Right: How Race-Conscious Black Conservatives Balance Blackness and Conservatism with Digital Activism.”

CM: Did the quarantine change any of your ideas about social media? Did it influence your final argument about what digital activism has become?

AS: I think it changed definitely about how it would impact politics this year. I was anticipating that people would lean towards more Trump than before. But with the quarantine and COVID-19, I’d be interested in seeing what they’re thinking now about how they’re planning to vote in November. I think my basic arguments are the same. The quarantine just gave me time to sit down and think about the future.

CM: Moving on to your experiences at UChicago, you majored in political science, and there are going to be people who will start their theses on political science this quarter, if not the next. What advice do you have for students who will pursue a topic similar to yours, like digital activism and social media, possibly remotely?

AS: It’s gonna be a mess. I’m not gonna lie. It sounds depressing, but, at least five times during this project, if not more, I thought I should completely change my topic. I should not write a thesis. I should maybe just leave this. Why am I doing this, when everything has changed because of quarantine, when people change their outlooks on social media? You’re gonna keep thinking that it’s impossible. Everyone is thinking it, it’s normal. I felt really inexperienced writing this, and I know many others felt like that. But the point of this is to get experience. You will be fine.

The advisers are chill. My adviser was great. It depends on your relationship with them. I go to her when I have a really important question about this really critical portion of my thesis. I’ve gone to her 70 times to get through this process. You will be okay, remote or not, social media–focused or not!

CM: What were your involvements on campus? How are you still involved, just for the final quarter, before parting with UChicago?

AS: A lot of random stuff on campus. I did W+ underclassmen years. I was involved in Leaders of Color. At this point, I’m involved in Phi Alpha Delta, as the secretary until elections a few weeks back. The orchestra was fun, then I joined chamber groups on and off a couple years. Mostly, I stay connected with my residents and hang out with the house—set time aside to do Scav, so we can win, as usual. [laughs] I’m really, really proud of Snell, and I know we’ll win again.

CM: You’re also an RA for Snell. How are you doing connecting with your house? How do you maintain your house culture? Are you doing artsy or media-related events?

AS: Yeah! It’s good. We’re still having house meetings. I’m still doing RA Tea. I’m switching my events every other week with the RHs. The RHs hold house meetings and sometimes we hang out and talk, show off our dogs. We did a YouTube reality show, a study session last week. Maybe a Netflix party! Or we might just prep for Scav! [We’re] sort of tossing out ideas, whatever people like—we can always hang out and talk. It’s definitely a weird experience, being an RA. I don’t see any more people in the hallway to bother, but I think we’re doing it. It requires adapting from everyone, but events like tea or YouTube reality shows are always fun.

CM: What was your favorite event as a remote RA?

AS: I love RA Tea, just to hang out and talk. That’s my vibe. People show up and we chat and we can head out. Or you can stay longer and make more tea! But I love my low-key events like that.

CM: What are your plans after graduation?

AS: Not sure! I’m applying for jobs—the market sucks right now, though. So I’ve applied to Harris. It’s a lot of waiting.

CM: As an RA, what’s your advice for the first-years who need to adjust to college when there possibly is no college campus?

AS: Oh, gosh. Use social media! Your house’s Facebook page! Reach out—all the first years are scared. Digital media is a powerful tool. Just go and talk to people. If we do get to be in-person, college is a time for you to get on your feet. You’re gonna mess up. You’re not gonna be the same person in four years that you are now. I know I’m not. Just take everything with a grain of salt; you will be okay. Remember your digital memories, and your physical memories too!