A Few Clouds Disrupt the Bright Sky that is "Animal Crossing: New Horizons" 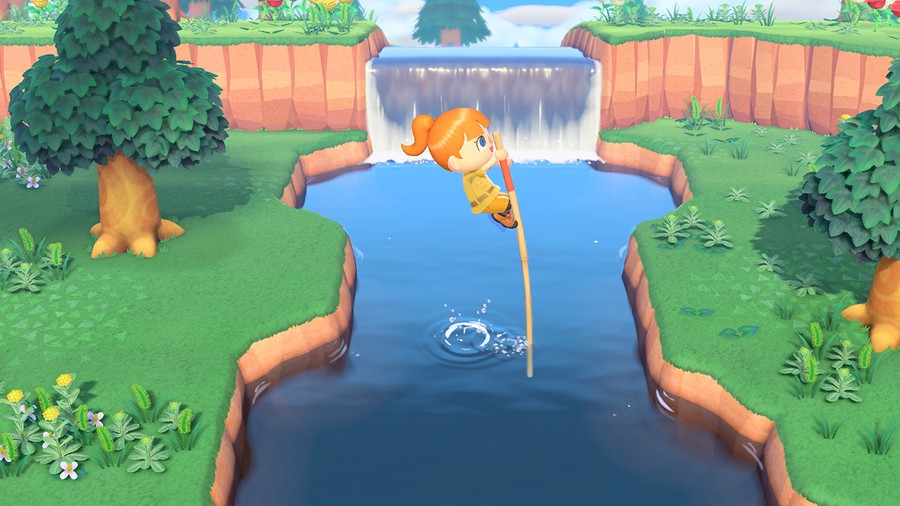 In the year of video game remakes, "New Horizons" stands out as an adorable return to "Animal Crossing."

Since its initial release about a month ago, there have been countless words about the newest addition to the Animal Crossing series. What can I say that hasn’t been said already? Even The New York Times wrote about how relaxing the game can be in these times of pestilence, quarantine, and Armageddon. So, I know I’m not being original when I say that this game could not have been released at a better time, when making a home of your own deserted island sounds like a prelapsarian paradise to everyone on Earth who doesn’t already live on one.

So far, I am enamored with New Horizons (2020). The game has captured me in a way that its predecessor, New Leaf (2012), failed to, and I’m not the only person who feels that way. There exists a sense of progress in New Horizons that simply wasn’t present in its predecessor. I have been playing New Horizons since the day of its release, and I don’t think I’ve even unlocked a quarter of the content—I only unlocked the clothing store on the first day of writing this article and, man, what a huge milestone that was. In New Leaf, it never felt like there was more to the game than its beginning. There was a village, a main street, and a few rivers. That was it. Sure, as the mayor, you had tangible political dominance over your adorable little neighbors, but that can only get you so far.

One part of New Horizons that really makes it special is the combination of the new “Nook Miles” system and the DIY system. With this combination, the player’s activities will result in some quick gratification. When the player chops at a tree, for example, the game rewards the player both with wood, a valuable and indispensable crafting material, and some Nook Miles, which you can spend on new DIY recipes, clothes, furniture, or currency vouchers. Additionally, one of my favorite parts of New Horizons is that the island is yours to mess around with. You find the location for the new shops; you decide who moves in and who skedaddles; and you build the bridges and inclines that connect the island and transform it from deserted paradise to tourist-trap wasteland--at whatever pace you so desire.

That said, something is unsettling about the island beautification process in New Horizons. Every time Tom Nook, everyone’s favorite philanthropist-turned-loan-shark, tasks me with finding a plot of land for a new villager to build their house on, I get a little nauseous. There’s something so pure and serene about the initial deserted island at the start of the game, and turning it into just another small-town community based on gossip, real estate, and commodity exchange feels—for lack of a better word—perverse. Tearing weeds out of the ground is one thing, but when I’m demolishing the trees, rocks, and flowers I’ve developed such a close connection to, I start to have a bit of a problem.

There are a few other hiccups in the game’s design, some of which even fall outside the petty category of “moral quandaries.” New Horizons’ s crafting system, while awesome in theory, can be a bit asinine. When I’m trying to craft multiple pieces of bait, for example, I shouldn’t have to sit through the same seemingly-eternal 10-second crafting animation for every single little bag, especially considering how useful a single piece of bait is on its own—that is to say, not very. I also get thoroughly annoyed when one of my tools breaks, and I have to walk halfway across the island just to craft a new one. Considering how many triple-A games have such comprehensive on-the-fly crafting systems—the majority of which are about 1/50th as fun as Animal Crossing’s—it doesn’t seem unfeasible for New Horizons to include a portable crafting system of some kind. And I know that I could carry a DIY workbench around in my pockets, but the workbench would take up one of only 30 slots. Inventory spaces in this game are few and far between, and the measly little upgrades that you can get to your pockets don’t help this problem very much. Why do essential tools each take up an inventory slot? Tools take up eight of the limited slots at any given point in time, and we already have the tool ring. Why don’t the tools that we have there just disappear from our regular pockets?

All these problems aside, New Horizons is a ton of fun. These days, when going outside incites more anxiety than the frantic escape that follows a hit-and-run, Animal Crossing is a haven. You can plant trees—my favorite activity—visit your neighbors, develop infrastructure, catch bugs, fish, improve on your interior deco skills, and farm currency completely at your own pace. There are a few little annoyances I seriously hope Nintendo recognizes and promptly fixes, but, other than that, it’s hard not to be hypnotized by the silly little conversations that you end up having with your neighbors on your deserted island—especially when conversations with your actual neighbors are likely to be much less entertaining and much more superficially terse.

"Animal Crossing: New Horizons” Is Whatever Hobby You Want It to Be