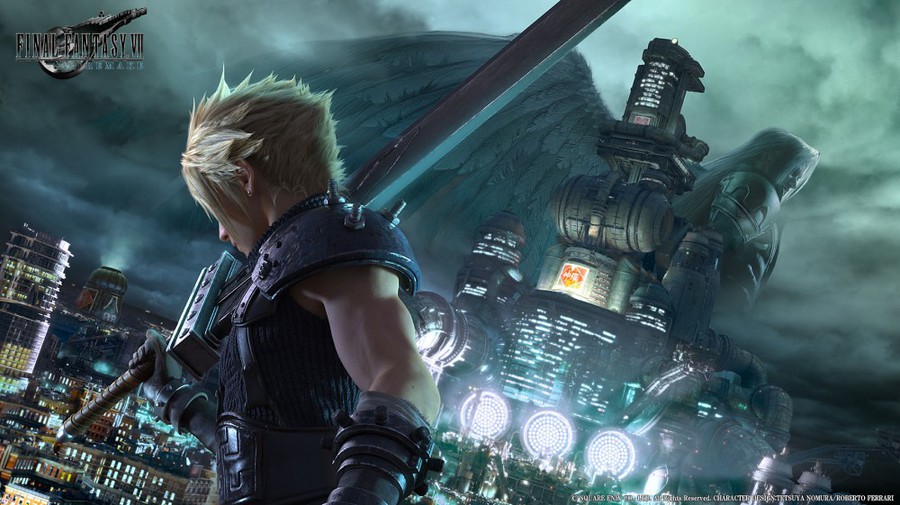 The long awaited remake of the popular "Final Fantasy VII" boasts amazing graphics, but drags in terms of narrative.

We return once again to the series which, despite its title, has been around long enough to span the average American sitcom: three good seasons, alongside a truck’s worth of filler episodes and spin-offs. And like a sitcom, once a good game is old enough, nostalgic fans will inevitably clamor for the developers to remake it with fresh cinematography and features to recapture the magic for a new age, not realizing that their desire is more likely rooted in their traumatic inability to relive the joy of childhood rather than the game itself. Hence, Square Enix released Final Fantasy VII Remake (2020) five years after its official announcement, and 15 years after the fans prepared a siege of Square Enix’s headquarters unless it was done. I didn’t play the original PlayStation Final Fantasy VII (1997) upon its initial release because I was too busy not being born yet, but in anticipation of the remake, I played through it, then its remake, to understand the hype and have slightly more legitimate grounds for criticism than I normally do in my reviews. Thus, the two-part question: Is FFVII Remake good, and is it better than the original?

After five years in proper development, the amount of effort put into FFVII Remake to make it faithful to the source material while giving it a unique identity is abundantly clear. Those who are familiar with the original will remember it as a stallion of the Japanese role-playing game (JRPG) genre, a category of games that typically feature turn-based combat, sprawling overworlds, and a plot focused on teenagers using friendship to kill God. FFVII Remake is still a JRPG, yet it’s evident that the game is as much influenced by the innovations of modern gaming as it is by its predecessor.

This is certainly true of FFVII Remake’s combat choreography. While fights in the original game had characters take turns to perform one attack before recharging, like taking one swing at a piñata before shotgunning a Gatorade, Remake’s combat is much more dynamic, boasting a hybrid system of real-time and turn-based combat that resembles that of Kingdom Hearts. While these systems have historically been abhorrent, FFVII Remake finds perhaps the best balance by being mostly real-time, but pausing the gameplay when the player opens the command menu to select spells or special attacks, rather than forcing the player to frantically find them mid-fight. Plus, with the new stagger effect and the ability to switch characters during fights to attack from different angles, combat is much more engaging. It is irritating that characters who aren’t directly controlled during combat seem incapable of filling up their Active Time Battle meters on their own; it makes switching to them feel like a waste of time if the one attack that I needed fails just because I hadn't played the character enough. But overall, the combat is fun, fast-paced, and satisfying when you succeed.

As for the game world, this is another area where the developers’ efforts really do impress. While the classic FFVII was created during the ugly days of early polygonal graphics, FFVII Remake is one of the most cinematic games in recent years. The city of Midgar is no longer a collection of splotchy textures and boxy streets, but a techno-industrial behemoth with a sleek, realistic design. The game world is packed with life, with citizens absolutely everywhere and ready to offer you extra dialogue, new equipment, or even additional storylines. Sector 7, the slum which acts as the home for the main characters, is particularly enjoyable to reexplore in the remake, as it features a whole host of new side quests, minigames, and a 7th Heaven bar which looks like a proper building rather than a middle school science fair project. All of these new features make Sector 7 larger and more believable as a vibrant community rather than a dozen LEGO people living in 2.5D shacks, which helps the protagonist’s fight feel much more high-stakes.

However, while the combat feels smooth and the game world is dazzling, the story ended up becoming the thorn of this rosy remake, and since the other primary elements are the vehicle for the story, this made the issues all the more glaring. In both classic FFVII and FFVII Remake, the protagonist is a young mercenary named Cloud Strife, because apparently, Broody McComplicated-History was too subtle. After renouncing the Shinra corporation’s SOLDIER special forces, he is recruited by his childhood crush Tifa Lockhart and G.I. Joe–esque Barret Wallace into AVALANCHE, an eco-terrorist group dedicated to stopping Shinra’s exploitation of the planet’s resources. Yet beyond the same general beats, FFVII Remake tells a surprisingly different story from FFVII, starting with the fact that Remake doesn’t actually tell the full game narrative. Sure, with a 30- to 40-hour playthrough, FFVII Remake certainly looks complete. But any veteran player will be surprised to know that unlike FFVII, where the adventure in Midgar was merely the first 1/10th of a 100-hour game, that section has been stretched out into the entirety of Remake. Even if this Midgar has been scaled up to the size of a present-day open-world game, it’s slightly galling in light of classic FFVII taking you across an entire planet in the course of its narrative.

Plus, Remake somehow finds the most obnoxious ways to reinvent the story. To start, Cloud essentially shares Force FaceTimes with Sephiroth, the main villain who wasn’t even introduced in the original game until after the Midgar arc and hardly has a role in Remake. But the second and arguably worse change includes a character originally introduced later in the game, and while I won’t spoil it, putting them in Remake as an implication of alternate realities just makes their role in the story even more absurd than before. In truth, these changes feel more like shallow fan service than a proper retelling, and the fact that the game ends on a cheeky “to be continued” only makes the world of FFVII Remake feel less cohesive, despite its ostensibly greater scale.

Therein lies the biggest problem with Remake: The pursuit of making games bigger and better ultimately means that the games of today cannot possibly be as big as they used to be. FFVII Remake may look incredible and have more enjoyable gameplay, but it’s telling that Remake can only show 1/10th of the story before needing to wait years for the next installment, while Classic could tell the entire globe-spanning saga in a single release. So yes, Final Fantasy VII Remake is a great game in its own right that I did enjoy. That said, I would almost recommend it to people who didn’t play classic FFVII, and I might just wait until the rest of the games in the Remake series are released before returning to FFVII Remake. It’s fine to tease us with a polished new toy, but if you only give us a single piece of it every five years, I’m just going to keep playing with the old toy with rusty nails that have stabbed me enough times to make me enjoy it.