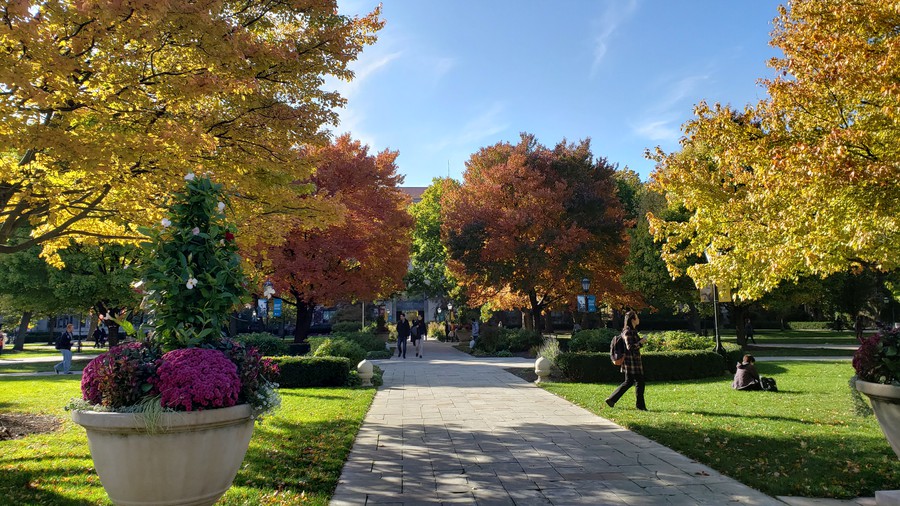 The main quadrangle during the fall.

The quad is the centerpiece of the UChicago experience, both physically and figuratively. Although graduating seniors will not be walking through Cobb Gate this spring, they have plenty of other memories from the quad. The Maroon sat down with some of them to ask the question: “What is the most bizarre thing you’ve seen take place on the quad?”

“Spring quarter of my first year…. It was a beautiful sunny day, and my friends and I were doing some work out on the quad. An ice cream truck was up and running, people had set up hammocks, people were throwing around frisbees…and there was a massive tortoise just chilling out there on the quad. This wasn’t one of the small Botany Pond turtles, this was an actual very large tortoise. It was just having the time of its life moseying around, and at one point it was hanging out with a small dog who came to investigate it. I posted a photo of it on the meme page, and through that found out that this tortoise’s name was Bowser and that it was the ‘guard tortoise’ for Sig Chi. I never saw Bowser after that day, but I hope he’s doing okay!” —Belen Edwards

“Sometime during my third year in spring quarter, as I was heading to a morning class at the Social Science Research Building, I noticed what seemed to me a grad student in a flannel shirt, working on their laptop—a dark gray, chunky one—on one of the benches at the center of the quad. They were gesticulating wildly at their computer, but I thought nothing much of it and headed to class. Just noted it, and walked ahead. After class, I returned to that central intersection of the quad, on my way to the Reg. The student was still there, but this time on another bench…. I had a class some hour and a half after my previous class, so after spending some time at the Reg, I walked back to the quad, heading to Cobb or Wieboldt. Again, I saw the student, but they had moved, yet again, to yet another bench. They seemed deep in thought, their legs crossed, and chin cupped in hand. I went to class. Exiting class, I headed to the MADD center to visit a friend. I took the long way by passing by the center of the quad, just to check my expectations and to check on the student. They. Had. Moved. To. Another. Bench.” —Cat Pavel

“It was the weekend before week 10 or finals week, I was coming out of an RSO meeting from Stuart and walking back home. When I went through the quad I saw so many dogs and people there. At first, I thought it was some RSO meeting but then someone told me it was a dog therapy session hosted by the RHs to [help] people de-stress from upcoming finals. It was pretty loud, there were like 20-plus dogs and the quad was very crowded. We had to walk through the crowd [but] the dogs were all too occupied by other humans to run up to me.” —Yi Zhong

“This was in my first year and Scav is a thing that happens every year…. I was walking to Hum and I saw, right in front of Ryerson, this 20-foot-tall cardboard cutout of Dean Boyer. I think there was a fire pit in front of it too, not really sure what was happening there. So, I keep walking to class and then I pass Dean Nondorf, the admissions main guy, and he just says ‘Hi’ as if this is a normal, yearly thing that happens—just 20-foot-tall cutouts of Dean Boyer on the quad.” —Max Marcussen