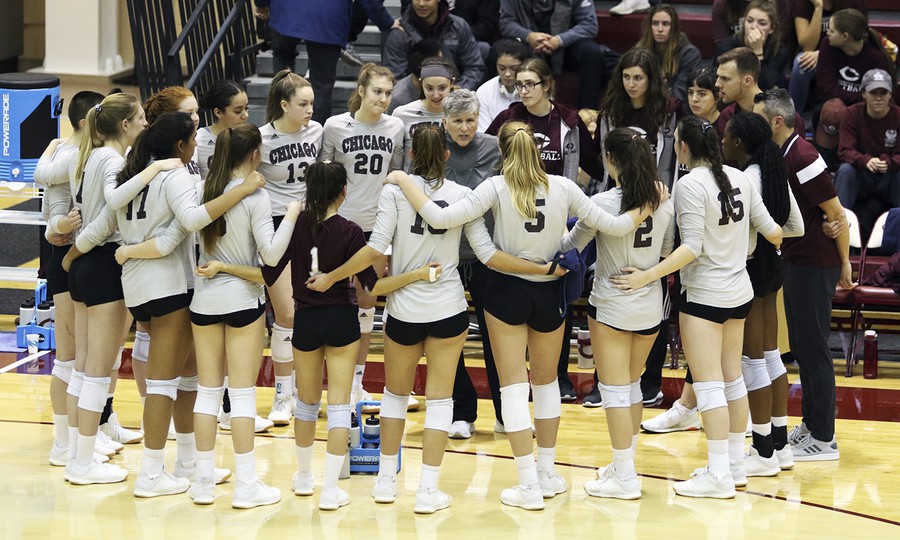 The women’s volleyball team at their final match of the 2019 season.

The Maroon has named the varsity women’s volleyball team as its team of the year. Their 2019 season is one that will go down in the history books for the program and set a foundation for future success. With a record 23-game winning streak, a 7–0 perfect round-robin record, and a historic advancement to the Sweet 16 in the NCAA Championships, the team has its most paramount season to date. Despite these numeric signs of success, ultimately a sense of camaraderie and community sportsmanship catalyzed these victories.

Going into the season, the team saw the loss of many seniors. This led to a distinct uncertainty about the team’s chemistry for the 2019 season. However, retaining a core group of players, they were able to build off previous growth. Four starters returned and new talent joined the roster with the first-year class. Right from the beginning of preseason, there was a high level of competition in the gym, with all players competing for a spotting spot. However, the Maroons maintained this competitive atmosphere, making the whole season into a battle even during practices. With all players pushing each other to get better, the team developed a key intensity and drive.

Once tournaments started, the women’s volleyball team made the firm decision to fight for every point. In the 2016 and 2017 seasons, the team would often enter tournaments as underdogs. However, following the 2018 season, they were ranked in the top ten; other teams came zealously to competition eager to play and beat the Maroons. The 2019 season started with the annual Gargoyle Classic Tournament, where the team ended their first day 1–1. Disappointed by their initial performance, the players immediately realized that other teams were not going to let them win so easily; they would have to work for every point. This realization became a defining point, launching a subsequent winning streak.

This winning streak was supplemented by an early victory against Calvin College, the first ranked team in their league. Following this, the Maroons played tough regional teams in their early season, which ultimately prepared them for the intensity of the UAA Championship and NCAA Championship tournaments. Along the way, the women picked up win after win, securing a noticeable streak of victories. However, none of them were focused on the sweep of wins, focusing on each other. Fourth-year Anne Marie Stifter explained, “We never mentioned the streak in practice. It was never a reason to play as hard as we did. We were competitive and had the drive. We played for each other.”

This type of drive derives from a selfless approach to competition. The players enjoyed being around each other and playing volleyball. There was joy on the court whenever the Maroons stepped onto one. Ultimately, this developed a unique selfless drive in all of them to give their teammates everything they had.

By November of 2019, the team secured a record 23-win streak. They went on to be the first team in the program’s history to reach the Sweet 16 and have a perfect 7–0 round robin. The team concluded its season with a loss against Carthage College in the NCAA Championship, losing their spot in the Elite Eight. They ended with a final 28–4 record and a truly magnificent season.

Reflecting on the historic season, Stifter noted, “Madison, Bella, and I came into a very different program. In my first year, we were nowhere close to beating Calvin. We became so much more competitive. Where the team is now is the result of work from people before us and with us. This is something to be proud of. UChicago volleyball has become a force to be reckoned with.”