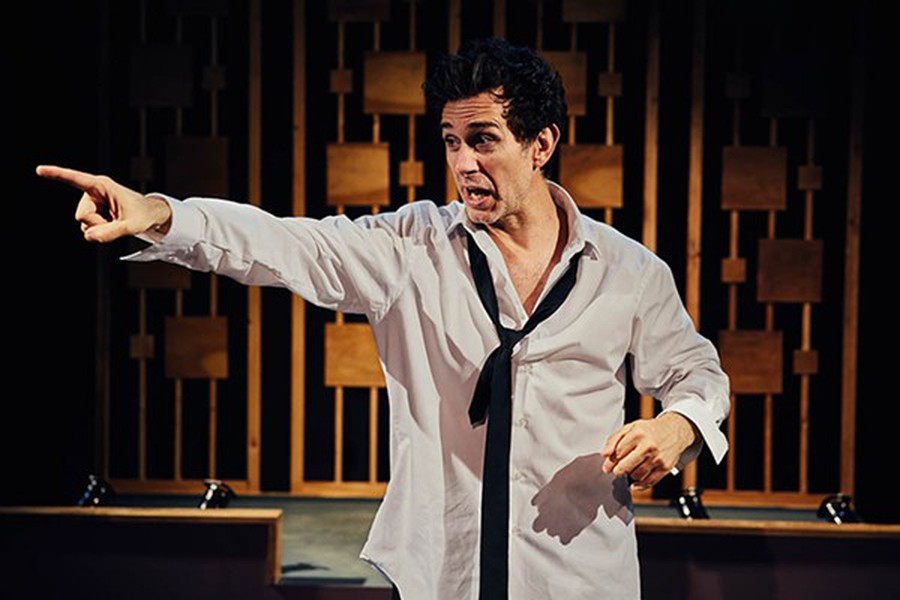 Marmo displays a dizzying array of his capabilities as an actor throughout the show, even if it might have ultimately been a detriment to the understanding of the story.

When we watch stand-up, we usually don’t blink an eye when a comedian happens to swear. I’m Not A Comedian...I’m Lenny Bruce tells the story of how that acceptance came to be, and the individual we have to thank for it. Specifically, the show delves into the life of Lenny Bruce and his fight against the censorship of his material, especially in regards to what authorities at the time believed to be “vulgarity.” The one-man show is both written by and stars Ronnie Marmo, who serves as artistic director of Theatre 68 and has both staged and acted in countless productions. While the show itself is a strong concept, it does suffer from weaknesses in its framework.

Narratively and structurally, the show loses its footing. In terms of the narrative, the flow of events is disjointed and at times confusing to follow. Tragic events in Lenny Bruce’s life would abruptly be followed by a stand-up bit, giving the audience a kind of emotional whiplash. The lack of linearity serves as a source of further confusion. While linearity and chronology are by no means a necessity for the effective telling of a story, there exists a lack of foresight and awareness of what story the writer is trying to tell: one of a comedian’s struggle with the infringement of his freedom of speech, or one of a comedian’s life story. Though both can coexist in a singular show, they do not do so peacefully in this one.

Despite this narrative weakness, other aspects of the show guide the viewer through the sequence of events. The lighting design, courtesy of designer Matt Richter, is a significant component of the show and gives needed clarity in scene differentiation. Different types of segments are highlighted by different types of lighting; for example, stand up is characterized by the classic spotlight on the comedian, while courtroom scenes are characterized by blinding white light that floods the entire stage. Given the abrupt transitions that sometimes occur between scenes, the lighting grounds the storytelling when it gets ahead of itself.

What originally seemed a simplistic stage design serves a multifaceted purpose; two chairs portray a variety of scenes, from a car accident involving Lenny Bruce and his wife to the comedian’s stints in prison. A toilet placed on the corner of the stage serves as our entrance to the story and a grim reminder of its eventual end: the comedian’s overdose after becoming bankrupt from court cases concerning his routines’ obscenity. In combination with the lighting design, the stage design is another source of clarity in what can become a clouded narrative.

What the show may lack in its writing, actor Ronnie Marmo makes up for in the sheer love he exhibits in telling Bruce’s story. Every Bruce routine is so reminiscent of its namesake, even his daughter Kitty Bruce was struck by the similarity. Marmo’s passion for the role is clear in his playfulness with it; during a well-known Bruce routine revolving around the use of a particular word—one that eventually landed the comedian in problems concerning vulgarity—Marmo began to improvise and interact with the audience, leading to one of the funniest exchanges I’ve ever experienced in live theatre. Marmo displays a dizzying array of his capabilities as an actor throughout the show, even if it might have ultimately been a detriment to the understanding of the story.

The ending of the show is perhaps its most compelling and intriguing aspect. Following the death of Lenny Bruce, Marmo remains seated on the toilet as the names of comedians famous for their use of vulgar language in their material flash onto the stage with accompanying audio clips. Eventually, the clips cut out and a multitude of names flash one after another, giving way to an eerie silence as the show comes to an end. As an artistic choice, this is perhaps the strongest part of the show; I couldn’t stop thinking about it for the rest of the night. Despite fighting for a right most comedians now freely use without a second thought, Bruce remains largely unknown for it. This show is a call for recognition, and not just of Bruce. With the rise of cancel culture and political correctness, the show poses an interesting question: are these truly improving the language we use, or are they veiled attempts at censoring it? Are we reverting to the conditions that embroiled Bruce in legal troubles, or are we creating a new normal for the betterment of language?

While the production’s successful—and repeatedly extended—run has been put on hold by the pandemic, the production has stated that they fully intend to return to Chicago and continue their run once it has been declared safe to do so. Though the stage remains dark, I hold optimism for the return of this thoughtful piece of theatre and its continuation in Chicago.

Following the end of the show, Marmo talked to the audience about an organization created in Lenny Bruce’s memory that I would like to mention in this article. Founded by daughter Kitty Bruce, The Lenny Bruce Foundation combats alcohol and drug addiction with scholarships and education programs. Kitty hopes to establish educational modules that provide long-term success according to the guidelines of the foundation. If you would like to know more or donate to the foundation, visit www.lennybruce.org.