"Animal Crossing: New Horizons” Is Whatever Hobby You Want It to Be 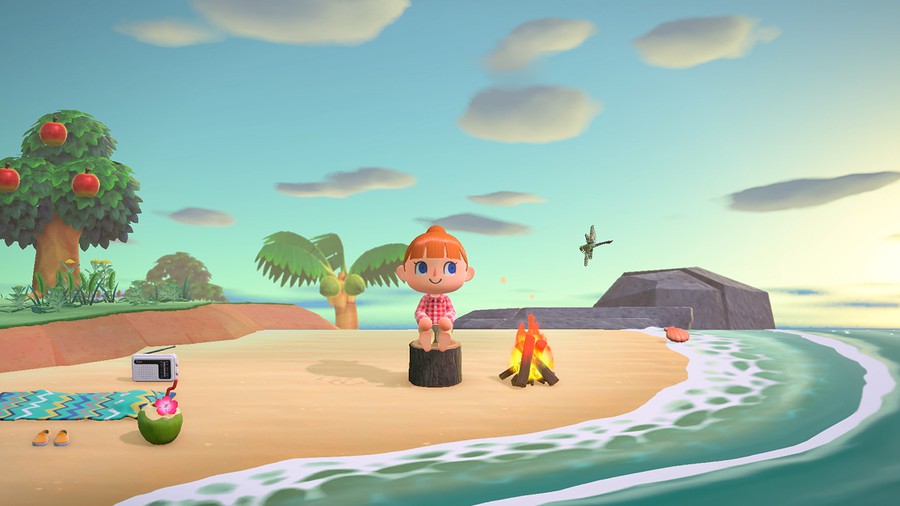 This villager is definitely practicing social distancing - we appreciate that.

If you were looking forward to any film, album, or video game in March or April, there’s a good chance you were left disappointed. Would-be blockbusters like Mulan and the new James Bond movie are among some of the dozens of movies that were delayed as the pandemic forced movie theaters to close nationwide. Lady Gaga and Alicia Keys delayed albums as concert venues similarly shut down. And while video games would seemingly be the perfect medium to weather the storm, some highly anticipated releases were pushed back.

But some games still managed to make it to market, and perhaps the biggest breakout hit was Animal Crossing: New Horizons, as it rides the self-care culture wave to new sales heights.

In this entry in Nintendo’s famously cute franchise, you play as a villager who moves out to a picturesque deserted island along with an adorable cast of animal peers, like the tanuki Tom Nook, who handles the money, and the dog Isabelle, who does the morning news announcements.

Once you’re there? Well, you pretty much do whatever you feel like. Tom Nook provides some guidance, perpetually granting you loans and expanding your house, but there’s no deadline and no interest. So for the most part, you’re then left with an empty island full of potential. And I think that potential has been so alluring for so many players because of the different avenues of creativity Animal Crossing creates, providing a relaxing, self-paced artistic outlet for many people during a deeply stressful and volatile time in their lives.

The activities in Animal Crossing vary in their complexity. Some are basic and will be standard for almost all players, like catching fish and bugs for your island museum, or pulling weeds. But others have layers and layers to them.

The world of Animal Crossing flower breeding is an intriguing one. Gathering all the different species of flowers available in the game is already a feat of its own, as you have to visit your friends’ islands to get their native flowers and fill any gaps with visiting islands of players you find on Twitter or forums. But that’s just the start. If you hope to breed rare colored petals to adorn your island with, you’ll have to arrange the intended “parent” plants near each other and water them every day. Best of all, it was recently discovered that the reproduction process follows actual Mendelian genetics. To get that Black Tulip or Blue Rose, it’s time to bust out the Punnett squares, water your garden, and bide your time.

There’s a whole host of tactics to maximize your income of bells (the in-game currency) for the econ bros of the world. You can play the “stalk market” by buying and selling turnips, whose price fluctuates day by day and island by island. Alternatively, you can connect to global Animal Crossing commerce through third-party sites like Nookazon, where players trade item recipes, rare fossils, or coveted in-game albums. People even trade villagers, having a player visit another player’s island to convince a certain villager to move. Is the cat Raymond—whose cute business attire and smug attitude have fans swooning worldwide—one of your neighbors? If you’re willing to part with him, you’ll be a “bellionaire.”

While charting out flower patterns or turnip profits offers the nerdy joy of learning how to optimize a system, the most fundamental kind of creativity at work in New Horizons is aesthetic. The game has thousands of fashion items and thousands more interior design elements, from wallpapers and rugs to televisions, dish drying racks, and gumball machines. Animal Crossing already has ways of encouraging decorating and dressing up, but for me, the biggest inspiration has been the game’s social media community. For weeks my Instagram “Explore” page has been almost exclusively Animal Crossing design and fashion inspiration, which Nintendo encouraged with a snazzy “fit” screen to document your threads. The unique shareability of New Horizons screenshots has massively popularized the game, since at this point it’s transformed into a pop culture phenomenon. It welcomed a lot of people I know who didn’t really play video games before, and most were pleasantly surprised at the comfort the game provided during quarantine.

But the supportive, laid-back creative freedom that makes Animal Crossing so comforting in a time of crisis isn’t coincidental. Professor Naomi Clark of the NYU game center offered insightful analysis about how original Animal Crossing was developed and released after one of the longest recent recessions in Japan, where homeownership was at historic lows as urbanization was rising. And around that time, Japanese tourist agencies heavily promoted the ideal of the furusato, which is basically a family’s historic, rural, family hometown. In the furusato, families would often be growing crops for a living, but that left them with a lot of leisure time (or at least, that’s the dream). Clark further explains that Animal Crossing is clearly constructed from this fantasy, as the player’s perpetual debt calls back to the 18th century, where these idealized villages would take on collective debt to pay for supplies and equipment. But much like Tom Nook’s no-interest, no-time-limit loans, these debts weren’t even really meant to be paid—they mostly just gave people a stake in the community: “You can’t go to the busy city, you’ve gotta pay off your debt, stay with us and catch dragonflies with the family (or whatever you feel like!).”

And when you look at it that way, how could Animal Crossing not be a hit right now? In a world where the debt does have to be paid off, where most people don’t have the freedom to do what they most enjoy while still getting by, Tom Nook’s little society—where you can thrive doing whatever makes you happiest, where every hobby or passion is appreciated and valued—is exactly what provides relief for a generation inheriting a broken, harsh world.

A Few Clouds Disrupt the Bright Sky that is "Animal Crossing: New Horizons"

"Animal Crossing: New Horizons" offers whimsical escape in these troubled times, and a significant upgrade from talking to your actual neighbors.