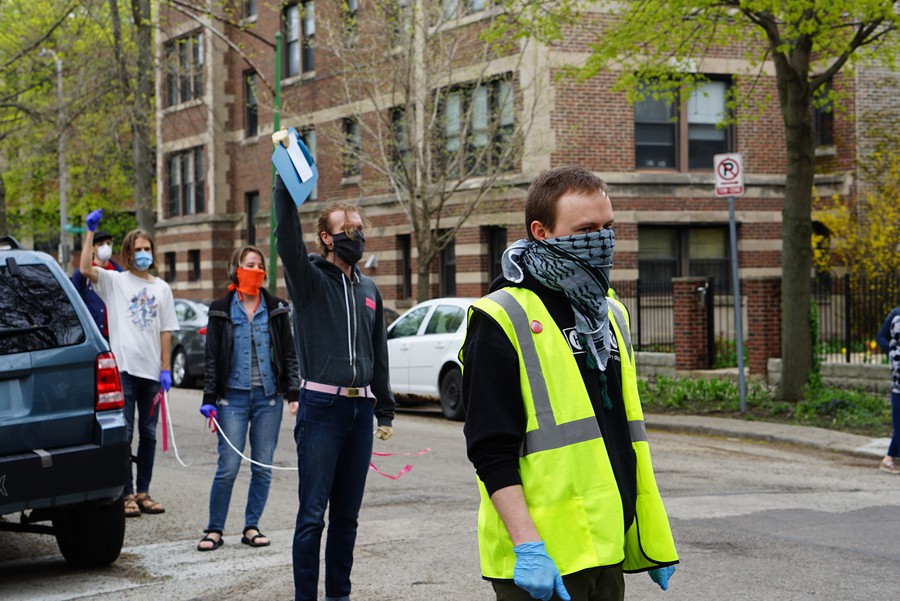 Protesters with Tenant United at a May 1st demonstration in Hyde Park.

Tenants United worked with tenants to fight for legal representation of their rights, negotiate with property companies, and organize actions such as #CancelRentRally to call for community attention.

“We are hoping to demonstrate that there are tenants who are withholding their rent and are still organizing,” one organizer from Tenants United who wished to remain anonymous told The Maroon. “Because May 1 is not only the first day of the month but also the second month of the crisis where people are unable to pay rent, even though people are [at home] with the shelter-in-place orders, tenants are coming out, expressing that they are in solidarity with each other and are willing to push back against, you know, these people who are ready to basically throw everyone.”

On April 23, Governor J. B. Pritzker extended the Illinois shelter-in-place order through at least May 30. The statewide restriction came into effect on March 21. Under the modified order, people older than two are required to wear masks in most public settings, and most businesses still remain closed.

To ensure the safety of demonstrators, Tenants United marked ropes with special lengths to enforce social distancing during the rally. They also provided gloves and masks for tenants and set up a hand hygiene station as demonstrators marched.

The organizer said that it is not only a matter of keeping social-distancing guidelines for them to provide safety measures. “There have been rules that have been put in place to restrict evictions, but one of the exceptions is for tenants who are putting the public in danger, and we already have a tenant who is being threatened with eviction over putting tenants at danger, [which] is really retaliation to organizing with their neighbors,” he said. “So [we] make sure that people are not at risk because it becomes a matter of protecting tenants from retaliation.”

Tenants in Hyde Park have long been concerned with the increasing rent and worsening building conditions. Unsafe conditions, such as prevalence of pests, broken elevators, unstable wiring connection, and fire hazards, have not been properly managed by landlords, protesters said.

“I don’t think I’ve talked to a single tenant who does not have roaches in their home and in their building,” Bex León, a TLC tenant and an organizer with TLC Tenants United, told The Maroon. “It’s not a personal issue. These are building-wide issues that everyone is dealing with, but the landlord will tell people that it’s their fault that these things are happening.”

Similarly, Mac tenant Theodore Bourget spoke of his experience to the demonstrators at the Mac Properties office on 53rd. “[In] the first apartment that I lived in, a radiator in our living room broke in the middle of winter, leaking water all over the floor, and [Mac] did not do anything about it. We met a roach on day one in our new apartment. There have been roaches ever since we moved in, and it has been eight months…. [Mac] hasn’t done anything.”

According to León, the latest letter of demand that TLC Tenants United sent to TLC Properties was on April 16. The letter was written in accordance with the Residential Landlord and Tenant Ordinance to demand negotiations and notify about a planned rent strike on May 1. TLC did not respond.

Meanwhile, landlords continued to push for rent payments during the pandemic over the past two months, despite the fact that many tenants were affected financially by the crisis, Tenants United said. One organizer from Tenants United, who wished to stay anonymous, talked with several tenants during the rally and found out that their rent still increased in the past two months.

“Just this month, their rent was raised $107—that was for the last person I saw. In times of complete crisis, [there are] people who don’t have any income and have to continue to work or are being exposed to working conditions that are not safe, and in the meantime they have to take care of their kids because schools are closed or have to take care of elderly,” she said, “at times like this where other countries are actually stopping any rent, any mortgages, any loans, and any taxes, [our] landlords [are doing] absolutely nothing, or even raising rent. This is inhumane. Housing is a human right.”

In addition, some tenants were harassed to sign arbitrary payment plans that required them to pay a rent that they were unable to afford, or by a close date.

“Even for the ones that are the most lenient, they are asking folks to pay when folks have reported that they have lost their jobs. Because of this pandemic they don’t have a way to make money,” León added. “Folks again are worried about being able to buy groceries and support their families and pay medical bills.”

“I don’t blame Mac,” Faye Porter, the president of Tenants United, said to the demonstrators. “I blame those politicians in Hyde Park that let them do it. Somebody had to let them do it.” She claimed, however, that Mac refused to talk with Tenants United when they tried to negotiate with them.

León shared Porter’s thought that the broader political picture in the city of Chicago has been driving landlords’ abuse of power. “These huge landlords [have] ridiculous amounts of power and political relationships throughout Chicago, and even in the state. In addition to that, there are a lot of relationships with large community forces, like the University of Chicago, which similarly has so much play in Chicago politics.”

Many tenants have realized that under-the-table talks have made it harder for politicians to truly speak for them. “For example, the calls on landlords to sign a pledge to be more gracious to tenants is not going to do a whole lot of good because it is not something that is creating rights for tenants. It will be treated by landlords in the way that they wish to treat it, which often will be simply a chance for them to get better public images,” León said.

Another organizer, who has been involved with Tenants United for three years, said this situation has highlighted the importance of a union like Tenants United, not just for rent-related reasons. “There is a surge of people joining. They are going back to the community and trying to build some relationships…. I’m working with folks on the gardening working group, where we are working on trying to figure out places where we can start planting some food because we expect that there will be food shortages.”

“My goal is to just have my neighborhoods to be a place where everyone is welcome. I want to make sure that my kids grow up in a place where it is diverse and everyone is respected and that people don’t get kicked out of their homes. I don’t want my kids to be going to school with their schoolmates being kicked out of a neighborhood because they cannot pay the rent or because their apartments are not taken care of,” she concluded.