Cross-country and track athlete Jackie Rosa reflects on how the quarantine has impacted her season and her team. 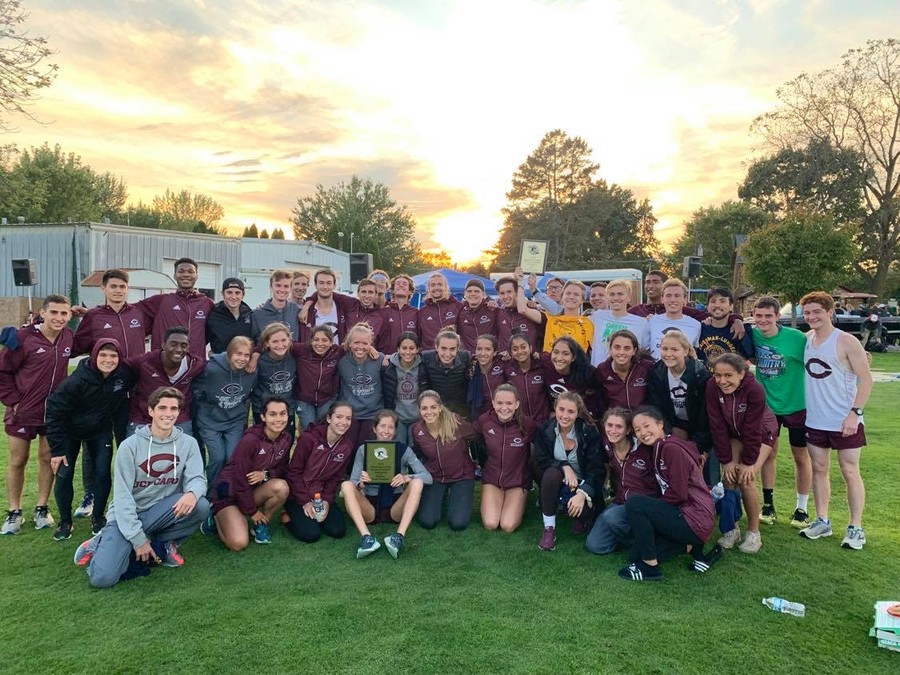 The cross country poses for a photo after a meet in autumn of 2019.

With the cancellation of all varsity spring sports, many athletes have found themselves at a loss. As both a cross country and track and field athlete, I am in competition year-round. Preseason begins at the end of the summer, cross country starts in the fall, indoor track in the winter, and outdoor track in the spring. Ultimately, I am constantly training and competing without any official off season besides the summer.

When the spring track season was confirmed to be cancelled, the common sentiment from my team was disappointment. We had an incredibly strong senior class, who were predicted to contribute amazing final performances to the NCAA Indoor Championship, which was abruptly cancelled. Head cross country and track and field coach Chris Hall described the heartbreaking moment when he was informed of the decision that the meet was cancelled, “For our women’s team that had a real opportunity to challenge for the championship this was hard to take, and for Alex Scott, a senior on the men’s team ranked No. 2 in the country in the shot put. The team understood the decision, but learning about it so late was really tough.”

Despite the sadness surrounding the meet and outdoor season cancellation, Hall remains optimistic for the upcoming 2020 cross country season due to the “competitiveness” of the teams returning next year.

Personally, this time of quarantine and having a season taken away has put into perspective how much I enjoy running for the sake of running. I feel very grateful to be a runner because my daily run adds some sort of structure to my schedule. Every run feels like a little victory for the day, which is important during these times of uncertainty. I have found this time in quarantine to be an opportunity to savor running and working out, which is often a struggle when I’m at school and my daily schedule is much busier. With more time on my hands, I have engaged in alternative forms of working out such as biking, hiking, yoga, and more lifting. Although there is uncertainty of when our next official season of competition will be, my motivation to train is still high because I find exercise to be the most therapeutic part of my day. I have no control over when I’ll be able to compete again or when I’ll even be able to run with my teammates (which has been the biggest struggle for me), but with running I have control over the outcomes of my fitness and overall well-being.

Although cross country and track are often perceived as individual sports, my team is incredibly close and has maintained communication despite being quarantined in different parts of the country. Morale and motivation remain very high for the team. When asked about what has been her motivation for training and her greatest difficulty with losing a season of track, third-year Annika Hildebrandt said, “I have kept up my motivation for training by looking forward to the next time I can safely practice and compete with teammates again. The greatest difficulty with quarantine and losing a season of track is not being able to run with teammates and it made me realize how grateful I am for the friendships I have on the team.”

Second-year Val Figueira has maintained a positive attitude by finding the silver lining to the season being gone. When asked about the loss of the spring track season and the uncertainty surrounding the upcoming cross-country season, Val said, “My morale was lowest, when the weekend that would have been conference came up. As a steeplechaser, the event is only run in the spring, and I felt that I could have made big improvements in my running career. Although the season is gone, I can work on getting better from a training perspective, mentally and physically. Even if the fall season is lost, too, if I am able to be in Chicago with my friends, that is a bigger victory than an athletic season.”

During this unpredictable time, running has been the one constant. I am grateful that my sport can be practiced anywhere, any time, and even during a crisis like this. Although my season is lost, my motivation and appreciation of competing and being with teammates grows every day.