Sydney Jackson, a Chicagoland native, helped organize and lead hundreds of people marching from Bronzeville to Hyde Park last Sunday. That action will be the first of many for Jackson. 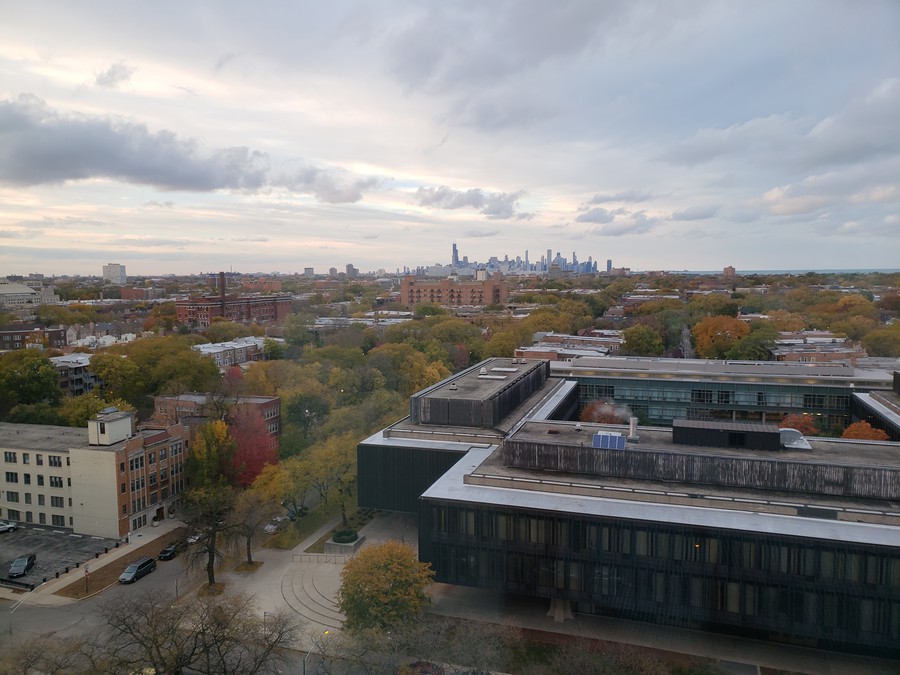 Looking north from 55th Street at Hyde Park and the South Side, with the Loop in the distance.

After viewing video footage capturing the murder of George Floyd, third-year Sydney Jackson went to bed feeling horrible. The next morning, though, she woke up “galvanized.”

That was on Thursday morning. By Sunday afternoon, Jackson was one of five organizers for the Chicago Demands Police Accountability march, which garnered interest from over 500 people on the event’s Facebook page.

For Jackson, the road to 53rd Street and Lake Park Avenue, where the march officially ended, began with a social media post.

“[On] Thursday morning, I posted a Facebook status saying I’m putting a feeler out there about trying to raise funds or resources to bring to Minneapolis,” Jackson told The Maroon. “By Thursday during the middle of the day, [given] the outpouring of support I had received, [it] felt silly to collect it and take it out of the city.”

Jackson grew up in the suburb of Oak Park, which she said provided her with a wide range of contacts from many different communities that she could bring together for the protest.

“I really can just post on my Facebook, ‘protest, Sunday, 2 p.m.,’ and then hundreds of people from the suburbs show up and they all bring a case of water and a sign, and they are there to listen to the voices we have selected to amplify.”

Those voices were from the South and West Side. Jackson acknowledged that the march on Sunday was the latest installment in a long history of agitating for racial justice and police accountability. “There are people who have been trying to do the same things we did on Sunday for years, but who have lacked both fiscal and institutional resources to pull it off,” Jackson said.

The official route of the march was from the police headquarters on 35th Street and Michigan Avenue to 53rd Street and Lake Park Avenue. Jackson said that at the beginning of the march, it was her, four other organizers, and a huge group of police on opposite sides of the street.

“We were met by over 40 police officers in riot gear and a handful of National Guard, I assume—members who were in their full army fatigues,” Jackson said. Governor J.B. Pritzker activated the Illinois National Guard at Chicago Mayor Lori Lightfoot’s request last Sunday following a night of intense unrest in the Loop.

Jackson, her twin sister, and Illinois House of Representatives member LaShawn Ford approached the police and “tried to create a peaceful dialogue with them.”

“We told them nobody had come with any type of weapons or any type of violent intent of engaging with the police,” she told The Maroon.

“Before we could finish that statement, the sergeant cut us off and said, ‘I had protesters who came to me yesterday and said the same exact thing and I saw them break a police sergeant’s arm in front of my face.’ The first thing I thought was, ‘Well yeah, they’re there because they saw one of your police officers kill one of their own in front of your face,’ but you can’t feed into that.”

Throughout the official march, police and protesters kept their distance. “CTA bus drivers started using their buses to barricade the streets for us,” Jackson said. “We would stop every time we got to an instance of looting and made sure we walked around all of it, so that none of our protesters were affiliated with the looting.”

“The next time I even came within close proximity of the police in large numbers was when our march got derailed on 53rd, and there were riot police stationed in front of a Target that had been previously looted, and a number of other officers. But no interaction with them,” she said.

It wasn’t until after the march had been officially called off that there was any kind of a standoff between police and protesters, Jackson said. After a moment of silence for George Floyd, Breonna Taylor, and other victims of police brutality, the march ended around 5 p.m.

Police in riot gear then began to hem in dispersing protesters and make arrests as the 9 p.m. curfew approached, with protesters forming a line up against a wall of police at 53rd Street and Lake Park Avenue. Multiple protesters reported beatings and arrests on Twitter.

For Jackson, Sunday’s action was an imperfect beginning to a much longer fight.

In a Facebook post the day after the march, she elaborated: “The reason why I staged a peaceful protest yesterday was specifically because I could—because of the many privileges I have in being from Oak Park, a UChicago student, white-passing, economically supported by family and community, etc., etc. Peace cannot be taken for granted—to be able to LIVE peace and ACT in peace is a privilege.”

“Yesterday was day one. I have taken a leave of absence from my job; I have taken what distance from my academics that I can. This is where my life is being redirected right now,” she said.

Jackson said that she did not expect much UChicago student attendance at the march, and because of COVID-19, she did not want to make assumptions about other people’s abilities to participate in large public actions.

But she emphasized that mass mobilization was the way to turn social media anger into concrete change.

“Each and every one of us has multiple parts. Some of us are good at sorting emails. Some of us need to go on people’s Facebooks and send invites. We can all do something, and if we all do something, it’s not even painful. If everyone took ten minutes out of their day to help, we can do so much,” Jackson said. “People just need to realize that 10 minutes multiplied by thousands of people means a revolution.”